Lennar: A Ray of Hope For Housing

In my article yesterday on a double-dip recession, I painted a bleak picture of the housing market. The economic data definitely points to further weakness. But today I read the first-quarter earnings report of Lennar (NYSE: LEN), the third (sales) or fourth (market cap) largest homebuilder in the country, and it was pretty darn good!

Is a Return to Profitability for Lennar in the Works?

To be sure, the company lost four cents per share, but that was much better than the 30-cent loss that analysts were expecting. Even better, the average selling price of a home actually rose 6 percent, gross margins almost tripled to 19.2 percent from 6.5 percent, and orders for new homes rose by 18% even though price incentives declined.

And here’s the kicker: CEO Stuart Miller predicted that full-year 2010 would see Lennar return to profitability for the first time since 2006! As you can see from the chart below, the last three years have been a nightmare for Lennar:

New Home Construction is on the Mend!

What gives?  How can Lennar be doing so well when the overall housing data is so bad?  In the earnings press release, CEO Miller explains it this way:

We continue to see that the overall housing market is moving towards stabilization, as more confident homebuyers recognize the increased affordability of homeownership.

The bulk of foreclosure activities is situated in areas that do not compete with new home construction, such as the inner city or the extreme outskirts of markets in which we operate. We found that a number of our markets were no longer affected at all by foreclosure homes, as they had already been absorbed.

I think Lennar’s success is primarily based on its ability to cut costs (e.g., reducing the number of floor plans it offers) and purchase new home lots at bargain basement prices. Selling, general, and administrative (SG&A) expenses declined year-over-year by 360 basis points as a percentage of home sales. If your costs are low enough, you can make a profit in a recessionary, low-demand environment.

In addition, the company purchased 2,700 new home lots during the first quarter at good prices and in desirable locations. It now has more than 100,000 home sites available for new construction, so it is ready to make some serious money when the economy turns.

Lastly, Lennar has accumulated hundreds of millions of dollars in tax loss carry-forwards from land sales in 2007, so that any profit it is able to generate in the near future will be tax-free.

Diversifying Away From Homebuilding

But there is more to the Lennar’s improving story. Lennar has diversified beyond homebuilding into distressed real estate investing.  Its new Rialto Capital Management division trades mortgage loans and mortgage-backed securities. If you know what you are doing, trading this toxic stuff can be very profitable. As CEO Miller said during the earnings conference call:

We have made meaningful investments that we believe will add significant shareholder value. This is a tough business, but we do it exceptionally well. We are clearly beginning to see more opportunities present themselves in this area and, with our unique expertise, we expect to be an active participant in this part of the market recovery, as we feel these investments can add outsized return to our recovering homebuilding operations.

During the first quarter, Lennar, in partnership with the Federal Deposit Insurance Corporation (FDIC), purchased distressed home mortgage loans worth $3 billion face value from 22 failed banks. Partnering with the U.S. Government is almost always a good deal because the government isn’t motivated by profit and provides financial incentives for private investors to take troubled loans off of the public balance sheet.

If You Want It Done Right, Do It Yourself!

In addition to cutting costs and diversifying, Lennar has taken back control of its destiny.  For many years prior to the recent housing downturn, Lennar engaged in an “asset light” business model where it created a multitude of joint ventures (JVs) that acquired and developed land for its homebuilding operations.

While these JVs acted as a type of leverage that increased profitability during the good economic times, they caused significant damage once the housing downturn started in 2007. Many of the Lennar’s JV partners either went bankrupt or walked away, leaving Lennar holding the proverbial bag. Not only was Lennar responsible for a disproportionate amount of JV debt, but it also had trouble selling JV assets to pay down the debt and other expenses. The problem: Lennar’s deadbeat JV partners had veto power over asset sales.

Over the last three years (2007-09), Lennar has abandoned its leveraged, asset-light strategy and dissolved most of its JVs. In 2006, Lennar participated in 261 JVs. By the end of last year, the number of JVs had declined to only 62. Over the same timeframe, Lennar has reduced its JV recourse debt from $1.1 billion to only $195 million.

The market has recognized — and rewarded — Lennar’s efforts at cleaning up its balance sheet. Over the past two years, Lennar’s stock has outperformed housing stocks as a whole by a wide margin (over 27 percentage points):

Looking at Lennar’s valuation compared to its homebuilder competitors, I discovered that, despite the stock’s recent outperformance, investors continue to punish the company for its off-balance sheet JV antics:

Lennar’s stock sports among the cheapest homebuilder valuations at 1.4 times book, despite having much better profitability than Pulte or Toll Brothers.

Besides off-balance sheet risk, the market may not like the fact that CEO Miller has effective control over the company with 46% voting power.  As the company’s recent 10-K filing warns:

Mr. Miller has the power to control the election of our directors and the approval of matters that are presented to our stockholders. Mr. Miller’s voting power might discourage someone from acquiring us or from making a significant equity investment in us, even if we needed the investment to meet our obligations and to operate our business. Also, because of his voting power, Mr. Miller may be able to authorize actions that are contrary to our other stockholders’ desires.

Yikes!  As I wrote in our first advisor roundtable, I tend to avoid — like the plague — investing in companies controlled by a single entity like management.

Only Time Will Tell

Still, Lennar’s valuation discount may not last much longer once: (1) investors realize that the JV issue is, to a large extent, a thing of the past; and (2) the Rialto division starts churning out trading profits. Time will tell, but regardless, reading Lennar’s first-quarter earnings report and listening to the conference call provided me with the valuable industry insight that the housing market is not a homogenous monolith but is composed of segments, some of which are actually performing rather well right now.

Try any or all of these top-performing investment services risk-free today and find out which real estate stocks have made the grade! 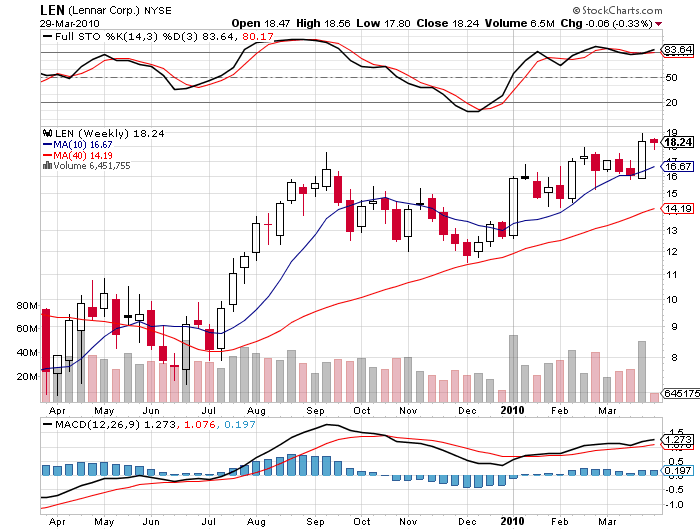