“There’s an underground, almost funky kind of cool associated with our brand.”

Growing up, I remember my family periodically eating out at the 24-hour Denny’s (NasdaqCM: DENN) on weekends for breakfast. I wouldn’t call them fond memories, however. In fact, I don’t remember anything about the food. Yep, the most memorable thing about Denny’s was the kid’s menu that could be turned into a mask.

Since I can’t remember anything about the food quality, I decided to check out opinions on my favorite restaurant review website, chowhound.  Below are some of the comments made about Denny’s:

Hmmm….I can’t believe the food was that bad when my family went there; else, we wouldn’t have continued to go back.  The food quality must have deteriorated over the years.

Actually, I tried to eat at Denny’s for the first time in more than 25 years a little over a year ago (right after the Super Bowl) when Denny’s offered a free Grand Slam breakfast to everyone in America. I checked an online Denny’s menu to see what the regular price of a Grand Slam breakfast was: $5.99 for two eggs, two strips of bacon, two sausage links and two pancakes. I’m a value investor (i.e., cheap) so anything worth $5.99 that I can get for free is something I will go after.

I decided to take Denny’s up on its offer. The promotion started at 6:00 AM, but unfortunately I decided to go at a reasonable hour of the morning around 8:30 AM.  The lines were so far out the door that the hostess told me that the waiting time was over two hours.  I was really hungry so I waited for about an hour and realized that I was still not inside the restaurant.  With a cold biting wind outside giving me the chills, I gave up my place in line. A free breakfast of dubious quality was not worth me getting pneumonia.

But before I walked away, I had spent several minutes during the hour I was in line looking at the people around me. Although some of the people looked like they had never held a job and were coming straight from the nearest public housing project, many looked like your average nondescript average Joes, perhaps unemployed but only temporarily down on their luck. I wondered how many of them were at this Denny’s promotion because of the bad economy and how many were there because they were, well, cheap jerks like me.

The Ultimate in Cheap

Even though Denny’s offered the free meal promotion again this year after the Super Bowl, I didn’t bother going because I had learned my lesson: no matter how cheap you think you are, there are always people cheaper who will get in line before you and make the wait interminably long.

Case in point: four high school seniors in arrived at a Denny’s before 5:30 AM. When they were seated, they ordered four grand slams – which were free – and four glasses of water – which were also free. They left without leaving a tip! Now that’s super cheap. Their total out-of-pocket cost: zero.  Their class level: also zero.

I bet if I had waited in line again this year the wait time would have been slightly shorter because the economy is slightly better. Perhaps economists should start using the “Denny’s free meal indicator” to forecast the unemployment rate?

The question remains: why is Denny’s offering this free promotion, which allegedly costs them more than $5 million per year?  Hint: it’s not because the restaurant chain is doing well. In fact, if you look at the last three years of sales, all you see is a steady decline:

The tragedy is that in the 1960’s Denny’s was at the top of the heap in the breakfast restaurant segment.  Oh, how the mighty have fallen!  Things started going downhill in the mid-1970s when McDonald’s (NYSE: MCD) got into the breakfast game with its Egg McMuffin. Then in 1993 six black Secret Service agents filed a class-action racial bias lawsuit against the company for being denied service and the company ended up settling for $54 million. Personally, I don’t think the company has ever fully recovered from that lawsuit’s bad publicity.

Lastly, DineEquity’s (NYSE: DIN) IHOP chain recently jumped ahead of Denny’s to take a top-five market-share spot in the $80 billion dine-out breakfast market (the top four are McDonald’s, Starbucks, Dunkin’ Donuts, and Burger King).  From 2000 to today, IHOP’s annual sales have more than doubled from $1.2 billion to $2.5 billion, while Denny’s sales have actually declined. Furthermore, IHOP increased its number of restaurants by 55% during the past decade while Denny’s restaurant count dropped by 15%.

The Revolution Will Not Be Televised

Given all this bad news, why is Denny’s stock up 73% so far this year?  Proxy fight! On March 2nd, a rebel group of private investment firms calling itself “The Committee to Enhance Denny’s,” and which collectively owns 6.5% of Denny’s stock, issued a press release stating that it plans on nominating three of its people to Denny’s eight-member board of directors at the company’s annual meeting on May 19th in Spartanburg, South Carolina.  One of them is 30-year-old Jonathan Dash, who was previously involved with Sardar Biglari in the successful activist shareholder attacks on Friendly’s Ice Cream and Steak n Shake (NYSE: SNS), both of which resulted in a change of control. (For more on Biglari and Steak n Shake, see this previous article of mine).

According to the rebels, they are not seeking control of the Denny’s board, just input into the decision-making process (yeah right). Dash & Company assert that Denny’s current management has made the following unforgiveable mistakes:

1. Ceding the #1 market position to International House of Pancakes (“IHOP”)

3. Unsustainable declines in key operating trends such as guest traffic

6. Lack of accountability for management at the board level


The Company’s existing board and management team have been given a sufficiently long period of time to demonstrate the effectiveness of their strategy, and we believe they have failed.  We do not believe their strategy has created value for shareholders.  The weaknesses of Denny’s management have forced us to seek changes to the board in the interest of all shareholders.  If the status quo is maintained, we are deeply concerned that the Company’s future will mirror its past.  Shareholders cannot afford to allow the board and management to have more time to implement an effective strategy.  We will not linger on the sidelines at this critical juncture.  Our nominees can help implement a strategic plan designed to create value for all shareholders.  We must act now!”

The Empire Strikes Back

Denny’s CEO Nelson Marchioli struck back with an investor presentation showing solid franchise growth and the most new store openings since 2001. Debt is down 50% since 2006, and the company is closing its underperforming restaurants in order to increase profit margins. Management also recently announced a partnership with Pilot Travel Centers that will convert up to 190 restaurants into Denny’s franchises and increase Denny’s annual sales by 7% to 8%. According to Marchioli, this deal is “one of the biggest developments this brand has made in its 57-year history.” Anyone else think this statement defines hyperbole?

Oh, and Denny’s management announced that starting April 3rd it was revamping its menu into a simplified structure of 16 items at only four price points: $2, $4, $6, and $8.  The $8 items include a beverage whereas the lower levels do not. So, since a drink is about $2, you can really think of the $6 and $8 levels as the same (tricky, tricky). For $2 you can get a “pancakes puppy sundae” or a biscuit with gravy.  Sounds appetizing – not.

Maybe Too Late to Buy

Will these last-minute corporate moves and hyperbolic statements by CEO Marchioli satisfy long-suffering shareholders and stave off the rebels? Probably not, but I give him points for trying.

With Denny’s trading at $3.80 per share, already up 73% since the start of the year, I think the stock price already reflects most if not all of the takeover hype associated with the upcoming proxy fight. One analyst from Roth Capital Partners is so bold as to predict that the stock will hit $5, but if management succeeds in squashing the rebellion, I’d expect the stock to fall back down toward the $3 range. That’s just about what its mediocre food is worth.

Raise your hand if you think Denny’s is “funky cool.” Anyone other than former chief marketing officer Mark Chmiel? Anyone? 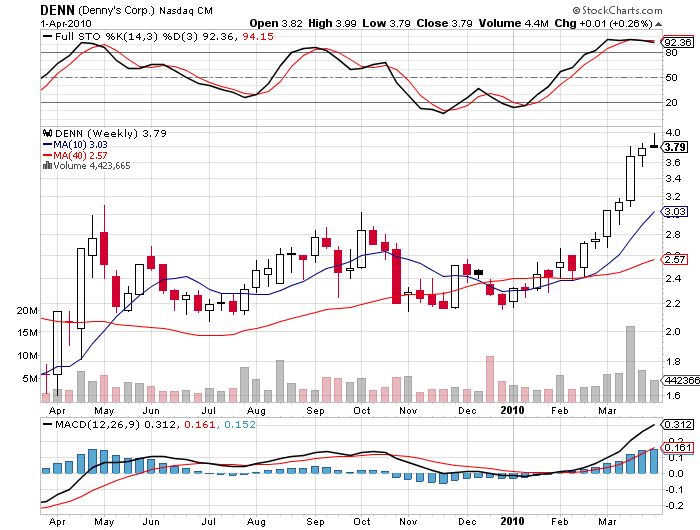