A combination of factors, including aggressive discounting and new products, have helped competitors chip away at Cisco’s dominant position within the industry. But what characterized Cisco in the beginning — responsive innovation — will enable it to recover its footing over the course of 2011 and into 2012.

The stock market is tanking this morning on news that Standard & Poor’s has downgraded the outlook for the United States’ credit rating from stable to negative. This means that there is at least a one-in-three chance that S&P will cut the credit rating of the United States sometime within the next two years. The reason? – S&P sees a “material risk” that U.S. policymakers will not be able to reach agreement on a deficit-reduction plan that will bring the massive U.S. debt under control.

But I have more important things to worry about than the end of the U.S. “AAA” credit rating: my new flip video camcorder – which cost me $200 — has been discontinued! How will I get software updates and customer support? Last week (April 12th), Cisco Systems (NasdaqGS: CSCO) inexplicably decided to shut down its flip video camcorder division. Only two years ago, Cisco purchased Pure Digital Technologies – the maker of the flip – for $590 million in stock. At the time, Cisco heaped praise on the flip video camcorder, stating:

This acquisition will take Cisco’s consumer business to the next level as the company develops new video capabilities and drives the next generation of entertainment and communication experiences.

Although I just got my flip a couple of weeks ago, I totally agree with Cisco’s assessment from two years ago. I LOVE my flip video! It’s so incredibly easy to use, which is important for a technophobe simpleton such as me. It has only one button – Record/Stop – which allows me to catch those important but fleeting moments like when my toddler son starts speaking gibberish in a very serious and thoughtful way. If I was forced to buy a full-fledged camcorder or a smartphone, I would still be fumbling to set up the shot when the precious family moment had passed. Downloading recorded videos to my PC was also a snap and I was looking forward to upgrading to FlipLive, which was going to allow me to stream live video via a Wi-Fi connection to my Facebook page. But now it’s not going to happen.

My love of flip vidoe is shared by millions of people – seven million, in fact. I did a lot of research on miniature camcorders and flip video always got the best consumer reviews. It is the number-one selling mini-camcorder on Amazon and has a leading 35-percent share of the entire camcorder market. Why would Cisco shut down such a successful product?

Flip Video Should Have Been Sold, Not Terminated

I understand that Cisco’s stock has not been doing well. Two weeks ago (April 4th), CEO John Chambers wrote a letter to employees admitting that Cisco had lost its way and would need to “take bold steps and make tough decisions.” Chambers wants to demonstrate to Wall Street that he is “turning things around,” but terminating the wildly-successful flip video franchise is not the way to demonstrate a turnaround. At the very least, Cisco should have sold the business. From what I’ve read, there are several companies that were very interested in buying flip video from Cisco.

So, I ask again: why did Cisco shut flip video down and not sell it?  Possibilities include: (1) Cisco wanted to keep control of the flip video technology for its videoconferencing business; (2) smartphones are the future of video recording; and (3) taking a tax loss from a shut down was worth more than it could get in a sale. I don’t buy any of these explanations, especially the one about smartphones. Flip video generated almost $400 million in sales for Cisco in 2010 and growth prospects remained bright. Eastman Kodak’s (NYSE: EK) marketing director was quoted as saying that the mini-camcorder market:

continues to grow, and is a category that draws a lot of attention from consumers and a tremendous amount of support from both brick and mortar and online retailers around the world. There will always be a place for single function devices in the consumer electronics world provided the manufacturer and other competitors are providing a compelling value proposition compared to multifunction devices.

Flip founder Jonathan Kaplan made a similar comment, stating that:

Cellphones will take high quality photos and videos but they are a different use case and billions of dollars can be generated in revenues from single purpose devices.

Despite all the publicity for the iPhone and Android, the fact remains that smartphones represent only a few percent of annual cellphone sales. As David Pogue of the New York Times recently put it:

Of the one billion cellphones sold annually, a few million are iPhones. The masses still have regular cellphones that don’t capture video, let alone hi-def video. They’re the people who buy Flip camcorders. It’s wayyyyyy too soon for app phones to have killed off the camcorder.

Granted, flip video sales amounted to only about one percent of Cisco’s total revenues of $40 billion, so killing the product won’t affect Cisco’s future business prospects. But that’s not the point. The decision to shut down flip video makes no sense and makes me question CEO John Chambers’ judgment.

Too Early to Buy Cisco Stock?

Long term, Cisco is probably a great investment at its current depressed price. But I’m not itching to buy the stock until I can see more evidence that the company is turning around and making sound business decisions. Cisco recognizing that it faces strategic problems is a good first step, but stocks rarely bottom merely because the CEO recognizes a problem. Stocks can continue to fall until investors are confident that the problems are over.

Just today, Cisco’s stock dropped below support at the $17 level. That’s not good from a technical perspective and I think the stock could continue dropping to $15 before stabilizing.

Find the Best Growth Stocks with the Help of Personal Finance

Elliott Gue of the market-beating Personal Finance investment service still likes Cisco for the long term despite its flip video debacle. The fact is that Cisco is dirt cheap with $40 billion in cash on the balance sheet. It remains the world leader in Internet protocol (IP) communications switches and is a leading player in the next big thing: cloud computing. Elliott has proved time after time that he can beat the market on a consistent basis by choosing undervalued stocks such as Cisco.

Elliott’s favorite industry sectors include technology. To find out the specific names of his favorite undervalued growth stocks in technology other than Cisco, try Personal Finance risk-free today! 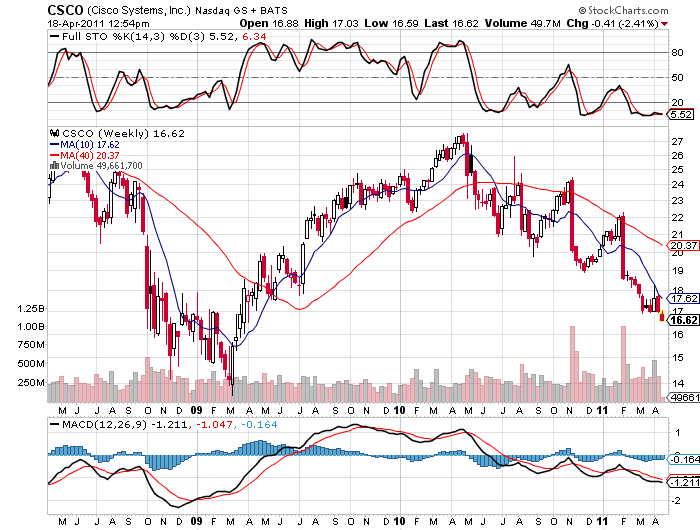