All investors and analysts are wrong from time to time; the key is how you recover from your past missteps.

American International Group (NYSE: AIG) is the most exasperating stock I have ever tried to analyze. In March 2010 I wrote an article arguing that AIG’s common stock – which at the time was trading for $25 — was actually worthless because its 2009 10-K filing (p. 194) showed the company’s common equity to be worth only $40 million. Then this past February I crowned Bruce Berkowitz of the Fairholme Fund (FAIRX) a genius for having predicted and profited from AIG’s amazing turnaround. Between March 2010 and the end of the year, AIG’s stock more than doubled to nearly $60 per share. AIG’s book value per share skyrocketed to over $40 on better-than-expected asset sales of its ALICO and AIA international life insurance units and the U.S. government’s decision to exchange its AIG debt for 1.655 billion common shares.

With Berkowitz’s cost basis per AIG share in the low-to-mid $30 range, he was sitting pretty. Similarly, the U.S. government looked like it would make a tidy profit of more than $25 billion on its 92% stake in the insurer. Dividing the $47.5 billion AIG still owed in bailout funds by the government’s equity stake of 1.655 billion shares yielded a break-even price per share of $28.73 per share, much lower than the price AIG was trading for at the time.

2011 Has Been a Nightmare for AIG and Bruce Berkowitz

Then 2011 arrived and AIG’s stock began to fall. . and fall . . . and fall. As of yesterday, AIG is the worst-performing stock in the entire S&P 500 index year-to-date.  In February, the company reported a huge $2.2 billion operating loss and an unexpected $4.2 billion charge to bolster the insurance reserves of its Chartis property and casualty business.  Fitch Ratings subsequently downgraded the credit rating of AIG, stating that the company’s “recent history of reporting significant adverse reserve development raises concerns about the company’s ability to generate consistent run-rate underwriting results.” In March, A.M. Best released a study showing that AIG had the worst underwriting results for the second straight year among the 25 property and casualty insurance firms studied. Specifically, AIG paid out $1.29 and $1.10 in claims for every $1 in premiums collected in 2010 and 2009, respectively, compared to averages of $1.01 and $0.99, respectively, for the other P&C firms. The first quarter of 2011 saw virtually no improvement, with AIG’s Chartis unit paying out $1.19 in claims for every $1 collected.

In other words, AIG is a lousy underwriter that consistently under-prices the insurance risk it assumes. Investors realized that more charges to bolster reserves for insurance claims were likely to occur and relentlessly began selling off the stock. In April, investors were subjected to an asbestos scare at AIG’s Chartis division, which resulted in AIG paying Berkshire Hathaway $1.65 billion to assume $3.5 billion worth of future asbestos liability. And earlier this month (May), AIG reported a first-quarter operating loss of $1.2 billion on insurance claims from the Japan earthquake, along with a massive $3.3 billion restructuring charge resulting from this past January’s debt-equity swap with the U.S. government. No wonder AIG’s stock has fallen almost 40% this year!

When Berkowitz was asked on May 9th why he held on to AIG – the largest position in his fund at nearly 11% of assets — through its entire huge price decline in 2011, he candidly responded:

You could ask, why do we hold? Well, I was wrong. I found it very hard to believe the government would sell its stake below book value and right now AIG is trading at two-thirds of book value

Yesterday (May 24th), the U.S. government and AIG went through with their plan to sell off a portion of the government’s massive common share stake and return it to private hands. The offer price was set at $29 per share, just above the government’s breakeven price of $28.73. The number of shares sold was 200 million from the government and 100 million from AIG itself, for total sale proceeds worth $8.7 billion. U.S. Treasury officials had been talking about a much larger offering worth $20 billion to $30 billion, but AIG’s price slide and limited investor interest negated that idea. After the offering, the government’s stake in AIG declined from its current 92% to 77%, which is still a controlling interest. Contractual provisions with AIG prohibit the U.S. government from selling any more shares for the next 120 days (four months), but the new plan is to completely exit the AIG stake within the next 18 months and “as soon as practicable.” Hmmm… 18 months would be right around the November 2012 presidential election. Coincidence, Mr. Obama?  Although AIG went public many years ago and never stopped trading on public exchanges, yesterday’s offering is being called a “re-IPO” because the public float was so small at 8% of the company’s capitalization.

With AIG’s book value at $47 as of the end of the first quarter, should the U.S. government have gone through with the AIG re-IPO at an offering price of only $29? There were reports earlier this month that the government was thinking of postponing the share sale. Bruce Berkowitz clearly thinks the re-IPO should have been postponed, but I’m not so sure.

First, a short lesson in how to calculate book value per common share. Look at page 3 of AIG’s first-quarter 10-K filing. You’ll see that “total AIG shareholders’ equity” is $85.026 billion. Subtract from this the $11.062 billion figure above it entitled “total redeemable noncontrolling interests.” The remaining number is common shareholder equity of $73.424 billion. Then go to page 4 and find “weighted average shares outstanding” which is 1.557748353 billion. Divide common shareholder equity by the number of shares yields:

Ok, now that the book value calculation is out of the way, here’s why the $47 book value figure may be inflated. First, over the past year AIG’s book value has been juiced up by the $36.71 billion received for selling off its ALICO and AIA international operations. This was a one-time event that won’t be repeated. It doesn’t help that these two divested businesses were AIG’s “crown jewels” because they provided the company with its only exposure to high-growth emerging markets.

Second and perhaps more important: AIG is a lousy insurance company. As I explain above, it pays out more in claims than it receives in premiums. If it continues to lose money from its primary business, its book value will erode over time. Just as retained earnings boost book value, losses erode book value. What are the chances that AIG will continue to lose money in the future? More likely than not if you believe AIG’s own SEC filings.  Take a look at page 82 of the its first-quarter 10-Q, where the company states:

AIG has recent negative evidence of cumulative operating losses and a lack of consistent profits. Based on this evidence at March 31, 2011, AIG cannot assert that it is more likely than not that any U.S. member deferred tax assets will be realizable.

AIG Says It Can’t Use Any of its Deferred Tax Assets!

Deferred tax assets are based on the amount of capital loss carry-forwards a company has. AIG has lost so much money in the past, that it can use these losses to reduce its future taxable income. However, the company can only use these carry-forwards if it makes profits in the future. Based on AIG’s statement above, it appears that it is not confident that it actually will make any money in the future. I could understand if AIG didn’t think it could use all of its sizeable deferred tax assets, but it goes much further than that. It expressly states that it doesn’t think it will be able to use any of its capital loss carry-forwards.

Really? Not a single dollar? That’s an amazing – and incredibly pessimistic — statement on AIG’s part. Could AIG be so pessimistic because the carry-forwards expire very soon? Nope. Take a look at page 356 of its 10-K filing from last December; it shows you the expiration dates of its capital loss carry-forwards. Although some expire in the 2013-2015 time period, a substantial amount — $11.3 billion – doesn’t expire until 2028 to 2030. If I’m reading this right, AIG doesn’t seem to think it will make a profit for many years to come. Okay, there is one other possible reason for pessimism apart from no future profits: change of control. On page 33 the company states that under arcane tax rules, it could lose its capital loss carry-forwards if the company experiences a change of control, which could happen soon after the U.S. Treasury’s ownership stake falls below 50%.

Why is AIG Selling 100 Million Shares in the re-IPO?

Still, AIG’s statements on its deferred tax assets are very worrying, as is its decision to join the U.S. government in the re-IPO and sell shares itself. I mean, if AIG really thought its shares were undervalued at $29, only two-thirds of book value, would it voluntarily sell its shares at such a “depressed” price? To be fair, it needed money to pay off a $550 million litigation settlement and to extinguish the Series G preferred stock the U.S. government owned (see p. S-11 of the registration statement), but it sold more shares than were needed for these things.

Given these disturbing revelations about AIG’s future business prospects, I wouldn’t be surprised if Mr. Berkowitz – in future 13F filings – reveals that the Fairholme Fund has begun selling off its 44-million share stake in AIG common stock and its 23-million share stake in January 2021 $45 warrants (NYSE: AIG-WT).

The Best Financial Stocks Can Be Found in Personal Finance

Personal Finance is composed of an all-star team of analysts that beats the market by providing penetrating bottom-up analysis of public financial information as well as top-down analysis of industry trends. 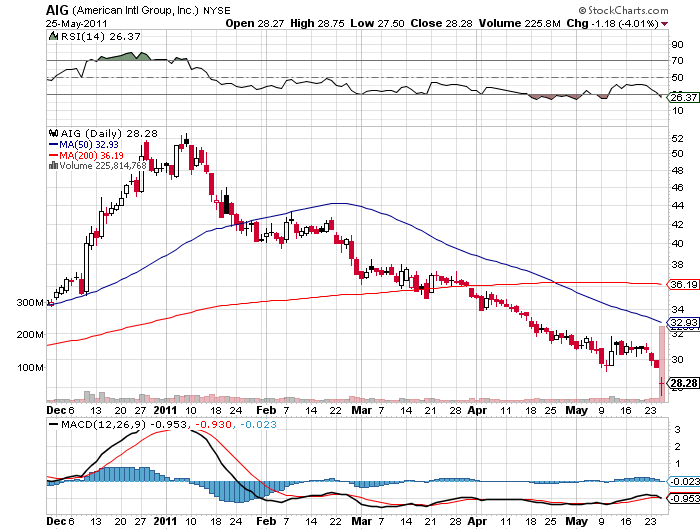