Every master limited partnership (MLP) is a combination of two companies, a limited partner (LP) and a general partner (GP). The GP performs the day-to-day management of the assets and makes major business decisions such as acquisitions or the construction of new pipeline projects.

I’ve had my eye on department store JC Penney (NYSE: JCP) ever since January, when I wrote JC Penney and Bill Ackman Make an Uneasy Truce. In that article, I wrote that adding superstar investor Bill Ackman and Vornado Realty Trust (NYSE: VNO) CEO Steven Roth to JC Penney’s board of directors was a catalyst for future price appreciation and that “the future for JC Penney suddenly looks much brighter.” I also noted that Ackman would have input into adding a third board member to be named later. What I didn’t know is how important that third board member would turn out to be (more on that later).

At the time in late January, JC Penney was trading around $32. Over the following four months, I was proven right as the stock steadily climbed 28% all the way to $41 in mid-May. Then suddenly, as evidence started piling up that the U.S. economy was suffering an economic slow down, the bottom fell out of the stock as well as much of the retail sector, with JC Penney falling all the way down to $29.82 last Friday (June 10th). Retail sales fell in May for the first time in 11 months.

But yesterday (June 14th) an amazing thing happened: JC Penney shot up 17.5% in a single day. What could cause such a huge gain? My first thought was a takeover offer. Nope. How about a great earnings report? No, the company had already reported first-quarter earnings on May 16th, which actually had marked the $41 short-term top for the stock before its nauseating decline to below $30 last week.

It turns out that the huge stock rise was based on news that the company had hired Ron Johnson, head of Apple’s retail stores, to become CEO on November 1st and a member of the board of directors a little earlier on August 1st. I’m the first to admit that I love going into Apple stores and playing around with the newest iPads and iMacs. The stores just ooze cool with their sleek glass and steel exteriors, their minimalist yet sophisticated interiors full of computer gadgets and crisp LCD television screens, and their super-friendly “genius bars” staffed by young and smart Apple cultists who will convince you that Apple products are heaven’s gift to the world.

Johnson is credited with having made the Apple stores the huge success that they are: under his watch Apple’s stores became the fastest retail operation to ever reach $1 billion in revenues – beating out the previous record holder known as The Gap (NYSE: GPS). More people walked into one of the 326 Apple stores last quarter than attended one of the four major Walt Disney (NYSE: DIS) theme parks last year. Furthermore, Apple’s sales per square foot of retail space (does not include online sales) are much higher than the numbers generated by other upper-scale retailers such as Tiffany (NYSE: TIF) or Coach (NYSE: COH). Prior to joining Apple, Johnson was a senior merchandising executive with Target (NYSE: TGT) for 16 years, during which time he was involved in transforming the dull discounter into the hip “Tar-jay.”

Ron Johnson is no Steve Jobs

Can Johnson work the same magic for incredibly-dull JC Penney? Is he worth the $1.2 billion in increased market cap that the company’s stock tacked on when the news broke? I doubt it, even though Bill Ackman calls Johnson the “Steve Jobs of the retail industry.” C’mon, Apple products are best-in-class and sell themselves. Johnson undoubtedly improved Apple sales at the margin, but I don’t think he – or anyone – can simply put lipstick on a pig like JC Penney and transform it into a princess. Never forget what Warren Buffett wrote in Berkshire Hathaway’s (NYSE: BRK-A) (NYSE: BRK-B) 1989 annual letter to shareholders:

That’s why I like energy MLPs so much: their business models based on the transport of natural gas and other fossil fuels are virtually assured of making money regardless of who runs them. Also never forget what legendary Fidelity fund manager Peter Lynch often said:

Go for a business that any idiot can run, because sooner or later, any idiot probably is going to run it.

MLPs have performed spectacularly over the past two years and are likely to continue outperforming in 2011. Unlike JC Penney’s puny 2% dividend yield, MLPs pay massive dividends that cushion their stocks from any market turbulence.

MLPs continue to grow and raise their cash distributions. Consequently, MLPs are not overvalued. To find out the specific names of the energy MLPs Roger and Elliott like most right now, give MLP Profits a try today! 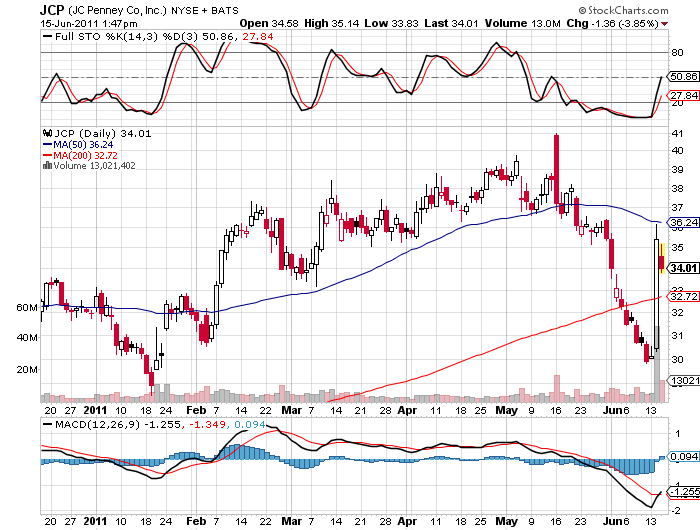