Is Netflix a Buy After the 35% Stock Plunge?

The company just rubs me the wrong way, ok?

I’ve been a public bear on Netflix (NasdaqGS: NFLX) since July 30, 2010 when the movie rental company was trading at $103. Today, the stock closed at $79.40, making anyone who took my advice and shorted the stock 23% richer.

On September 27, 2010 I criticized the company again because CEO Reed Hastings had lied to Canada and insulted America. Anyone who shorted the stock then at $165 would be 52% richer today.

Lastly, on September 2, 2011, I remained bearish on Netflix even after it fell $22 per share (10%) in a single day on the cancellation of its Starz content licensing deal. Whereas Goldman Sachs viewed the stock’s pullback to $213 as a “buying opportunity,” I wrote that the Netflix business model was broken and the stock was not even worth half of $213. A short of Netflix at $213 would now be in the green by more than 62%.

I’m not providing this history to brag, but to illustrate the importance of analyzing a company’s fundamental business model independent of what the stock price is doing. As I wrote in So, You Want to Be a Value Investor? – Think Businesslike, buying a stock simply because it is going up is a terrible way to invest. To quote Warren Buffett: “Price is what you pay, value is what you get.” A value investor is more interested in a stock that has gone down in price than one that has increased in price.

Most of the Stock Damage to Netflix is Complete

In the case of Netflix, I said back in July 2010 that I wouldn’t be surprised if the stock fell to $70 or below because that is about what the stock is worth. Market prices always converge with true value in the long run. So, despite the stock’s 35% one-day decline on Tuesday (Oct. 25th), I would not be a buyer here at $79.40. Short sellers, however, should consider closing out their position. As the old Wall Street saying goes: “Bulls make money, bears make money, and pigs get slaughtered.” The main damage to the stock has been done and I wouldn’t risk any short-selling profits on a continued decline.

For me to be interested in buying this fallen star, however, Netflix would have to fall an additional 25% to $59.50, which would constitute a 15% discount to my $70 fair value estimate. I think such a decline could happen sooner rather than later. Why? The company’s third-quarter earnings report – which precipitated Tuesday’s 35% collapse – was a horror show. CEO Hastings’ disastrous July decision to raise prices by 60% caused a consumer revolt that resulted in more than 800,000 people dropping their subscriptions. A September apology for the price increase did more harm than good because it was combined with a disastrous announcement that the company was splitting off its DVD rental business into a separate website called Qwikster. Subscribers hated the idea of losing the convenience of a single website to access both DVD rentals and streaming, which led Hastings to backtrack three weeks later and cancel the entire Qwikster plan.

Perhaps even worse than the subscriber loss was the company’s forecast of a global consolidated net loss in the first quarter of 2012 and negative cash flow (pp. 9-10). In my September article on the Starz cancellation, I warned that the higher renewal rates movie producers were demanding from Netflix for streaming video content would decimate Netflix earnings and Tuesday’s Q3 report supports my concern. CEO Hastings blamed the loss next year on international expansion, but I think a lot of the company’s earnings problems are occurring right here in the U.S. with the content renewal deals.

Netflix also announced a “pause” to international expansion and share buybacks. Tell me whether the buyback pause makes sense to you: during the third quarter, the company paid $39.6 million of shareholder money to buy back 182,000 Netflix shares at an average price of $218, but has now decided to stop buybacks because the share price has fallen below $80! If Hastings thought the stock was undervalued at $218, shouldn’t he be “backing up the truck” to buy even more shares at $80? What a poor steward of investor capital! I bet Fortune Magazine regrets naming this guy its 2010 “businessperson of the year.”

And expanding video streaming into 43 Latin American countries, as well as the U.K. and Ireland also seems like a really bad idea. CEO Hastings said that breakeven from this expansion may take longer than the two years it took in Canada because of stronger competition from cable and satellite video providers. Unlike in the U.S., where Netflix had a huge head start in streaming due to its existing consumer base in the DVD rental business, Netflix has no such consumer base head start in these foreign lands. The whole international expansion concept is flawed and will be a cash flow black hole for years to come.

Netflix Conference Call is Not Reassuring

During the post-earnings conference call, it was clear that analysts were freaked out by the company’s bad guidance and were unsure how bad things are going to get next year. One analyst asked the following question:

In positing your guidance, are you saying that Netflix will be unprofitable on a global basis over all of 2012? In other words, will losses over the next few quarters be larger than any profits that could come in 3Q or 4Q of 2012?

What we said is, that in the next few quarters, we’re putting a pause on international until they get back to global profitability, and we haven’t guided to the later half of 2012.

Does that answer allay your concerns? It doesn’t allay mine.

Netflix Valuation Suggests It’s Not Yet a Buy

Still, the fact remains that the company has 21.4 million subscribers to its video streaming service that are paying $7.99 per month ($96 per year) and 13.9 million subscribers to its DVD rental service that are also paying $7.99 per month. Combined, that equates to about $3.5 billion in annual revenue. The DVD rental business is eroding, so let’s give it a 20% haircut down to $1.1 billion in revenues from its current $1.4 billion.

Let’s split the difference and call $60 bargain territory. The stock may not get there, but I’d wait for it. Waiting is what value investors do most of the time anyway. 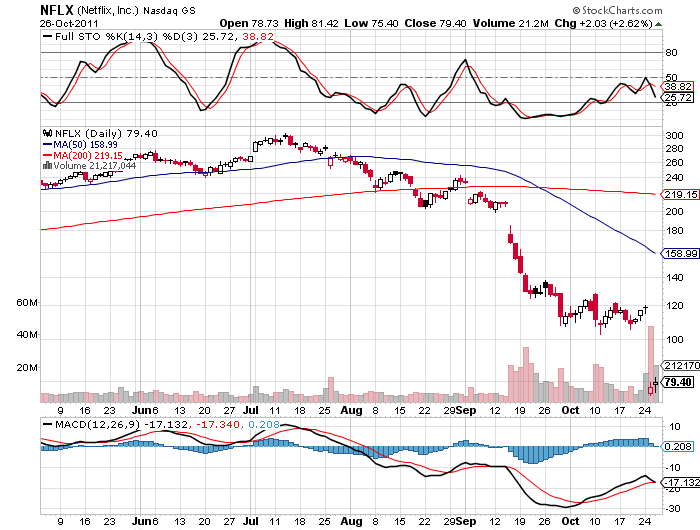