As we kick off the new year, it’s the perfect time to reflect on the year that was, what we expect from the year ahead and how you can profit in 2011.

My outlook for this year isn’t set in stone. Markets are dynamic, and we’ll change course if conditions warrant a shift in strategy. That being said, establishing a broad framework of expectations and a strategic direction is the cornerstone of successful investing.

The Year That Was

Before we can talk about what’s ahead for 2011, let’s take a moment to reflect on what we learned in 2010 and how we will apply those lessons in the new year.

A year ago investors were bearish, despite the S&P 500’s strong showing in 2009. Many pundits argued that the US was still mired in recession, while others acknowledged that the US economy was recovering but warned that a double dip was inevitable.

Amid the sensationalist gabble in the financial media, we focused on the economic data, which continued to tell the same story throughout the year: that the US recession ended in summer 2009, giving way to a modest cyclical recovery. We also noted that despite elevated unemployment levels, a double-dip recession wasn’t in the cards.

After stocks rallied almost uninterruptedly in the final nine months of 2009, we suggested that the market would pull back about 10 percent in the first half of 2010. We noted that this correction wouldn’t stick and projected that the S&P 500 would gain 10 to 15 percent on the year. Our 2010 forecast also called for a strong performance from commodities, particularly oil, which we asserted would breach $100 per barrel by year’s end.

Our favorite sectors in 2010 were energy, technology, industrials and select financials, but we remained cautious on consumer-oriented fare, expecting US households to save more and spend less.

This outlook was correct on most accounts. The US economy continued to expand in 2010, with full-year growth likely to come in at about 2.7 percent. The S&P 500 is up roughly 10 percent on the year, though the first-half correction was larger than we’d anticipated.

Crude oil prices haven’t touched $100 per barrel, but we came close. Oil prices have picked up and remain elevated, thanks to recovering demand in developed markets and growing consumption in emerging markets.

Our biggest error in 2010 was a sin of omission: We avoided consumer-discretionary names, one of the best-performing groups in 2010.

Strong returns from our favorite sectors made up for this oversight, but we’ll look to add exposure to this group in the coming weeks. (Click here to be sure you are among the first to learn of my newest recommendations.)

Investors continue to fret about the fiscal health of peripheral EU economies, but these problems haven’t spread to Europe’s core or to the US. 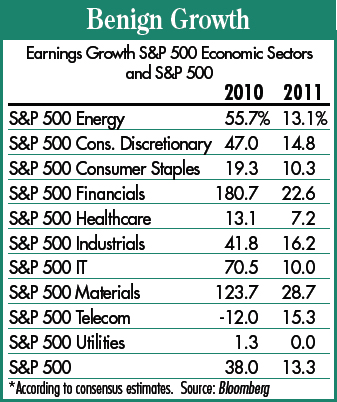 In addition, a deal between the Obama administration and Congressional Republicans will extend the George W. Bush-era tax cuts for all taxpayers and provide a one-year payroll tax reduction of $120 billion.

At less than 2.5 percent, consensus expectations for growth don’t reflect this stimulus and improving economic data. Given these developments, US gross domestic product should grow by roughly 3 percent in 2011.

Corporate earnings growth will slow in 2011, primarily because of tougher year-over-year comparisons. As you can see in “Benign Growth,” analysts expect S&P 500 stocks to increase earnings 13 percent next year, with sectors leveraged to global growth leading the way.

Commodities will be among the best-performing asset classes again next year. I look for oil to exceed $100 per barrel in 2011 and spike to as high as $120 at some point.

My top sectors for profiting in 2011 are energy, materials, industrials and technology. Let’s start with technology.

The proliferation of third-generation (3G) smartphones is one of the hottest trends in the technology space for 2011 and beyond, providing plenty of profitable opportunities.

Consumers increasingly want to surf the Internet, download applications, manage email and even stream video on their phones, driving demand for new 3G handsets that enable faster access to data.

According to research firm Gartner (NYSE: IT), global shipments of mobile phones jumped 35 percent in the third quarter, let by smartphone sales, which doubled from a year ago. But smartphones still account for less than 20 percent of all handsets sold, leaving plenty of room for growth in the year ahead.

And smartphones aren’t the only band-width hungry devices. Sales of Apple’s (NSDQ: AAPL) iPad and other tablet computers are set to top 50 million units in 2011.

One of the biggest beneficiaries of this trend is a company that owns significant intellectual property associated with CDMA (code division multiple access), a key technology that underpins all 3G standards.

This company earns a royalty based on the price of EVERY 3G handset sold, whether that handset is an iPhone, Blackberry, Droid or other device.

The company has also already staked its claim to profits from the new, even faster 4G devices coming soon. It has patented several key technologies that put it ahead of the competition.

With continued smartphone growth here at home and explosive growth ahead from developing countries, this stock is a great buy today. Click here to get my full analysis, including my current buy price.

Oil and natural gas prices diverged sharply in 2010, a trend that should continue into the new year. Growing demand for oil and declining petroleum inventories will force OPEC to increase its output by year-end. This will lower the cartel’s spare capacity. A similar situation caused oil prices to surge from 2004 to 2007.

Meanwhile, a glut of production from prolific US shale gas fields has inundated the North American market. Drilling activity should moderate after midyear, when producers will have secured most outstanding leases by production. Long-term demand trends for this clean-burning fossil fuel are encouraging, but an oversupply will weigh on prices into 2012.

Two stocks I recommend today for outstanding profits this year are:

The company’s US operations are concentrated in two areas that are less prone to production issues than those in Central Appalachia. In addition, it has almost no exposure to weak US thermal coal prices in 2011.

Get a free copy of my eye-opening report Profit Richly from the Great Global Energy Race.  It gives you everything you need to profit from today’s most perfectly positioned energy stocks. Get it now.

The chemicals business is cyclical, but demand for plastics is on the rise. In addition, tight supplies of propylene, a key component of the plastic polypropylene, are pushing up prices.

My top materials stock stands to benefit from these trends. The company plans to divest its loss-making US polyethylene terephthalate business to free up capital for growth. Trends in the company’s fibers business are strong, particularly in emerging markets where cigarette smoking is on the rise.

Meanwhile, plentiful supplies of propane, ethane and other natural gas liquids from US shale plays have lowered the costs of chemicals production in North America, a major competitive advantage. Get the full details when you take a risk-free trial of Personal Finance.

The newest issue of Personal Finance has my full 2011 outlook as well as my recommendations for stocks, bonds, commodities and more. I also dust off my crystal ball to give you my forecast for 12 key areas for 2011–including my outlook for gold, inflation, the S&P 500 and more.

Read it immediately online when you accept this risk-free offer to try Personal Finance.

In coming weeks, we’ll talk about my 2011 roadmap for income investors and my latest outlook for Asia. Stay tuned!