PIMCO’s Bill Gross is one of the worlds preeminent bond investors and is certainly no crackpot. But his January market letter is full of apocalyptic visions of disaster that sound, well, disturbed.

Gross has ample reasons to feel disturbed given his atrocious short-term performance as manager of the PIMCO Total Return Fund (PTTAX). Over the past year, PTTAX has underperformed its benchmark by 405 basis points (4.05%). That degree of underperformance can get you fired in the equity universe and is almost unheard of in the bond universe. PTTAX only earned 3.55% during the past year, meaning that the 4.05% underperformance reduced a bond investor’s return by more than half! Gross’ big mistake was lowering his bond portfolio’s duration in anticipation of inflation caused by the end of QE2 in June 2011.

Given the steep yield curve, Gross’ decision to lower duration by switching out of long-term bonds and into cash and short-term U.S. Treasury bills resulted in much lower yields and no capital gains. One of the best-performing asset classes of 2011 was long-term U.S. Treasury bonds — which Gross had shunned for much of the year. Gross’ performance was so bad that PTTAX was in the 90th percentile last year – i.e., 90% of all bond funds outperformed his fund.  Anyone other than Gross would be long gone, but Gross’ long-term record – 7th percentile for five years and 8th percentile for 15 years – has earned him a chance to recoup. But many bond investors are not waiting for Gross’ attempt at redemption. Since November 2010, investors have pulled more than $13 billion out of the $244 billion fund, including $1.4 billion this past December alone.

Gross’ new strategy is to load up on government agency (e.g., Fannie Mae and Freddie Mac) mortgage-backed securities (MBS) in anticipation of the Federal Reserve enacting quantitative easing part 3 (QE3). He is so sure that QE3 will happen that he has actually borrowed $60 billion in cash to buy MBS on margin. News that the Federal Reserve sent a report to Congress urging new stimulus for the housing market has just added fuel to speculation that the Fed will take matters into its own hands if Congress doesn’t act.

For QE3 to even be on the table tells you just how weak the U.S. economy has become.  In this month’s January market letter, Gross has abandoned any possibility that the world will muddle through at a sluggish “New Normal” economic pace of low single-digit growth as it deleverages its huge debt load over an extended period of time. Rather, he now sees a catastrophic economic situation consisting of extreme bipolar outcomes: (1) deflationary collapse or (2) hyperinflation:

The New Normal as PIMCO and other economists would describe it was a world of muted western growth, high unemployment and relatively orderly delevering. Now we appear to be morphing into a world with much fatter tails, bordering on bimodal. It’s as if the Earth now has two moons instead of one and both are growing in size like a cancerous tumor that may threaten the financial tides, oceans and economic life as we have known it for the past half century.

The financial markets are slowly imploding – delevering – because there’s too much paper and too little trust.

It offers the fat-left-tailed possibility of unforeseen delevering or the fat-right-tailed possibility of central bank inflationary expansion. A specific QE3 may be announced – probably by mid-year – and the race to reflate will shift into high gear. But the outcome of left-tailed delevering or right-tailed inflation is not certain. Both tails are fat.

Yikes! Are these frightening ruminations the workings of a bitter fund manager trying to blame his recent underperformance on paranormal forces beyond his control, or are they brilliant insights from an experienced and highly-successful bond investor?. Probably a little of both.

If I’m reading Gross correctly, he’s not really saying that the deflation and inflation fat-tail scenarios are “either/or.” Rather, he seems to be saying they are “first/second.” The world’s huge debt load has not been worked off but has simply been transferred from the private sector to the public sector with the European sovereign debt crisis the prime example. No one is left to bailout governments, so they are being forced to retrench spending and increase taxes, which will cause a deflationary death spiral. Only after the deflationary debt spiral has commenced will financial panic ensue, which will finally motivate government central banks to authorize the dreaded but necessary last-resort solution: massive money printing that will pay off all debts but also debase the paper currency to the point where hyperinflation results.

As for stocks, Gross gives thumbs up to electric utilities, large-cap pharmaceuticals, and U.S. multinationals, but he mentions these equity sectors almost as an afterthought since his deflationary scenario would torpedo virtually any common stock. 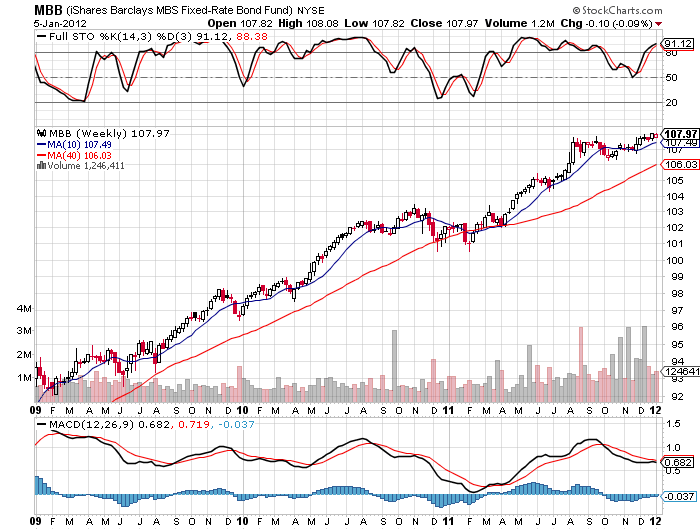