The shale oil and gas revolution that in 2010 enabled the US to grow its crude output for the first time in decades and overtake Russia as the world’s leading gas producer is spreading internationally. As we noted in the July 11, 2010, issue of The Energy Letter, The Future of Shale Gas is International, North America isn’t the only region blessed with rich shale oil and gas formations.

The US Energy Information Administration (EIA) in April 2011 highlighted the potential of international shale plays in the groundbreaking report, World Shale Gas Resources: An Initial Assessment of 14 Regions outside the United States.

Despite the promise of unconventional oil and gas plays outside the US, investors shouldn’t expect these fields to yield commercial production overnight.

Advances in horizontal drilling and hydraulic fracturing pioneered by US independents and oil-field services companies will accelerate the exploration and development of international shale oil and gas resources. However, one key lesson from the US experience stands: Each unconventional field presents distinct geological challenges that take time for operators to overcome. Many of these emerging shale oil and gas plays remain in the early stages of development; only with ample seismic data and well results will international operators be able to identify each play’s sweet spot and formulate a plan for commercial exploitation.

And although the US doesn’t have sole purchase on unconventional energy resources, the unique confluence of economic, political and industry conditions that supported the shale oil and gas revolution don’t exist in nations that are home to some of the most geologically promising plays.

In the Feb. 28, 2012, issue of The Energy Letter, we analyzed Argentina’s burgeoning unconventional oil and gas plays. This time, we follow the lead of several international oil companies and turn our sights to China.

The EIA raised eyebrows when it estimated China’s technically recoverable shale gas at 1,275 trillion cubic feet–roughly 25 percent more than its approximation of US resources. 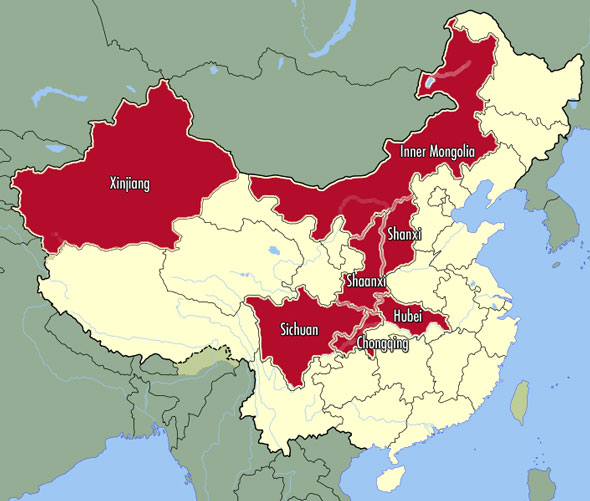 The Chinese government’s long-term plans call for natural gas to account for 10 percent of the country’s energy mix, about one-third of which will be imported via pipelines or as liquefied natural gas (LNG). In ExxonMobil Corp’s (NYSE: XOM) Outlook for Energy: A View to 2040, the integrated energy giant forecasts that China’s natural gas demand will grow at a faster rate than any other nation in the world.

Natural gas has been growing in popularity in China, particularly in power-generation facilities located near major cities. Concerns about air quality mean that many of the high-rise residences constructed during China’s recent housing boom are equipped for piped gas. Further migration to urban areas will only increase demand.

Even after China’s annual consumption of natural gas more than tripled between 2000 and 2009, this extraordinary growth shows no signs of abating. The National Development and Reform Commission (NDRC) estimates that in the first 10 months of 2011, domestic natural gas demand surged to 3,676 billion cubic feet (bcf)–up 20.4 percent from year-ago levels. Meanwhile, energy companies in China produced only 2,916 bcf of natural gas over the same period, an increase of 6.6 percent. To offset this shortfall, the country’s imports soared by 86.5 percent, to 904 billion cubic feet.

LNG accounted for about half China’s imports in the first 10 months of 2011; these volumes are expected to grow substantially in coming years.

China’s first re-gasification terminal opened in 2006, and the country currently boasts three operational import facilities, all of which are operated by CNOOC Limited (Hong Kong: 0883, NYSE: CEO), the publicly traded portion of China National Offshore Oil Corp. The first phase of the pilot Guangdong LNG terminal, which came onstream in September 2006, boasts a total capacity of about 180 bcf of gas per day, while the Fujian re-gasification terminal that began operations in May 2009 sports an initial capacity of 126 bcf of gas per day. The company also runs the Shanghai LNG terminal, which can re-gasify 146 bcf per day.

But that capacity is slated to expand substantially. By 2015, CNOOC should have five LNG import terminals up and running, while PetroChina (Hong Kong: 0857, NYSE: PTR) and its parent China National Petroleum Corp will have four operational re-gasification facilities and China Petroleum & Chemical Corp (Hong Kong: 0386, NYSE: SNP), or Sinopec, will have two LNG import terminals.

International oil companies have invested huge sums in massive LNG projects that will export Australian natural gas to China and other nations in the Asia-Pacific region. The table below summarizes these projects; investors seeking a detailed analysis of this trend should check out Australia’s Got Gas. 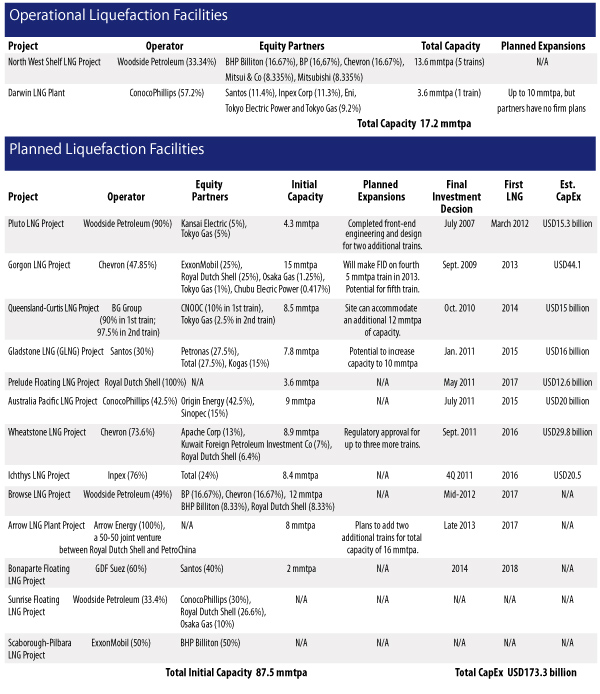 In recent years, international oil companies have also sought to add exposure to China’s unconventional oil and gas plays. Through its partnerships with PetroChina, Royal Dutch Shell (LSE: RDSA, NYSE: RDS.A, RDS.B) has been the most active Western operator in China’s shale oil and gas plays.

In September 2009 the two energy giants agreed to acquire seismic data and drill exploratory wells in the Fushun-Yongchuan block in the Sichuan Basin as part of a joint-study deal. This partnership was strengthened by a June 2011 agreement to collaborate on an automated system to create and complete wells in the region.

Royal Dutch Shell in 2011 invested more than USD400 on drilling 15 shale gas wells in China and plans to sink another 20 wells to 25 wells this year. Results have been mixed thus far.

The company has tightened its relationship with PetroChina in the new year. For example, Royal Dutch Shell inked a binding memorandum of understanding with Ivanhoe Energy (TSX: IE, NSDQ: IVAN) to acquire the Canada-based operator’s interest in a production-sharing contract for the Zitong Block in the Sichuan Basin. PetroChina owns a 51 percent stake in the development of the Zitong Block. The Western company and PetroChina reportedly will also sign a cooperation agreement to develop a shale oil block in the Santanghu Basin.

This collaboration has extended to North America, where Royal Dutch Shell in early February 2012 sold PetroChina a 20 percent stake in its Montney Shale acreage in Canada.

Although China’s shale oil and gas industry remains in its infancy, Royal Dutch Shell is ahead of its peers. Here’s a list of the other Western oil companies with meaningful exposure to unconventional oil and gas plays in China.

In next week’s installment of The Energy Letter, we’ll focus on the geology of China’s emerging shale oil and gas plays and relevant political and economic developments.