Yields on the Rise

But equities weren’t really the biggest or most important story of the past week; that honor belongs to US Treasury bonds. 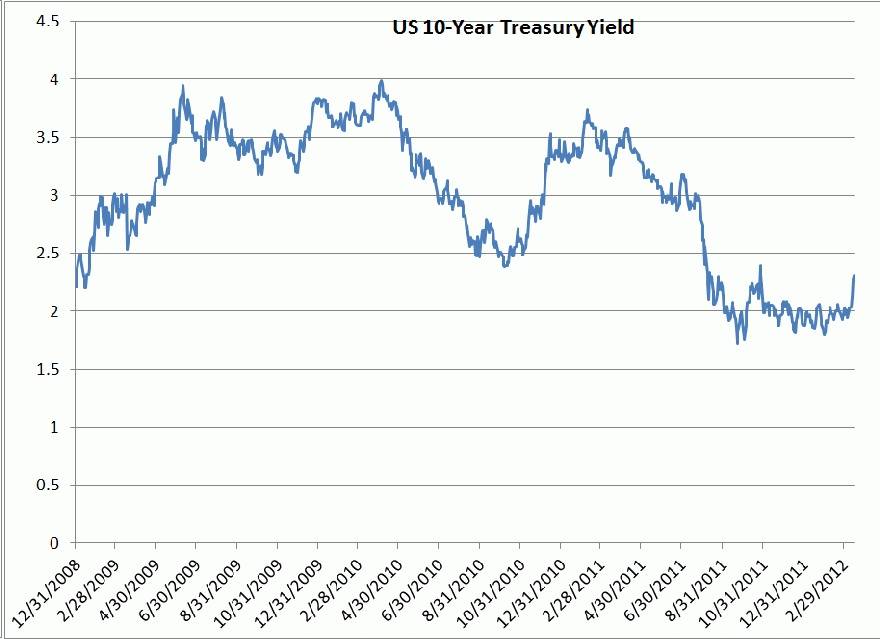 Last week, the yield on the US 10-Year Treasury jumped to over 2.3 percent, up from less than 2 percent just over one week ago. In the context of the steady downtrend in rates over the past few years pictured in my chart, that may not seem like a dramatic move. However, yields have been hovering in a tight range between roughly 1.80 percent and 2.05 percent since last summer so this represents an important breakdown in the bond market from its recent range. Note that when bond prices fall, yields rise so this spike in rates implies that prices actually broke lower.

Information received since the Federal Open Market Committee met in December suggests that the economy has been expanding moderately, notwithstanding some slowing in global growth. While indicators point to some further improvement in overall labor market conditions, the unemployment rate remains elevated. Household spending has continued to advance, but growth in business fixed investment has slowed, and the housing sector remains depressed. Inflation has been subdued in recent months, and longer-term inflation expectations have remained stable.

Note, in particular, how the Fed describes US economic growth as moderate but highlights a litany of risks including slowing global growth, strains in financial markets and a depressed housing sector. Given these risks the Fed states that it sees unemployment remaining elevated and declining “only gradually” toward levels considered normal.

In contrast, here are the first two paragraphs from the Fed’s statement released on March 13:

Information received since the Federal Open Market Committee met in January suggests that the economy has been expanding moderately. Labor market conditions have improved further; the unemployment rate has declined notably in recent months but remains elevated. Household spending and business fixed investment have continued to advance. The housing sector remains depressed. Inflation has been subdued in recent months, although prices of crude oil and gasoline have increased lately. Longer-term inflation expectations have remained stable.

Consistent with its statutory mandate, the Committee seeks to foster maximum employment and price stability. The Committee expects moderate economic growth over coming quarters and consequently anticipates that the unemployment rate will decline gradually toward levels that the Committee judges to be consistent with its dual mandate. Strains in global financial markets have eased, though they continue to pose significant downside risks to the economic outlook. The recent increase in oil and gasoline prices will push up inflation temporarily, but the Committee anticipates that subsequently inflation will run at or below the rate that it judges most consistent with its dual mandate.

In March, the Fed once again described US economic growth as moderate but there are some subtle tweaks in the language. In particular, rather than highlighting the risks to growth, the Fed recognizes recent improvements including a “notable” drop in unemployment, easing global financial conditions and a bump-up in household spending and business fixed investment.

Probably the most talked-about word of all in the March 13th statement was the Fed’s forecast that the economy would experience “moderate” economic growth in coming quarters. Back in January, the Fed characterized the outlook as “modest.”

While it might seem ridiculous to pick apart these statements to this degree, this is exactly what market participants do after every FOMC release. The Fed is notorious for using subtle changes in language to influence market expectations.

While the Fed did not change its promise that the Federal Reserve would maintain exceptionally low levels for rates through at least late 2014, the market took a more extreme view. Some economists are now looking for the Fed to begin hiking rates towards the end of next year rather than in 2014 as was previously expected. In addition, some market participants had been expecting the Fed to begin another round of quantitative easing –buying bonds to push rates lower—at some point later this year.  This statement does clearly make another round of QE less likely at least in the intermediate term.

As I’ve written in recent weeks, there’s a clear improvement in economic conditions underway but the basic pattern remains unchanged: the global economy is enjoying a sub-par recovery from the 2008-09 financial crisis. The Fed is unlikely to raise rates until the economy is clearly in recovery mode. The Fed is unlikely to raise rates before late 2014. With rates this low, income groups like MLPs should continue to attract investors’ attention.