A Market Correction Rears its Head

For the first time in 2012, equity markets wobbled this week in the wake of disappointing data out of China and, to a lesser extent, the EU.

However, as I explained in the March 2 PF Weekly  (“Curb Your Enthusiasm”), the bigger problem for the market is that investors simply have been too optimistic about the global economy. They’ve been ignoring several potential negatives, including a surge in energy prices, recession in Europe and the distortive effect of unusually warm winter weather.

The optimistic and overextended broader market was ripe for disappointment. Consequently, I’ve been calling for at least a short-tem broader market pullback that could see the S&P 500 decline 5 percent to 10 percent from its recent highs.

Such corrections are notoriously difficult to time, but it appears the selling this week is the beginning of at least a modest correction that could see the S&P 500 fall to the range of 1,300 to 1,350.

The main source of concern about China this week was the weaker-than-expected China Purchasing Manager’s Index (PMI) for manufacturing. PMI data are among the simplest and most useful economic data points released each month. Levels of 50 or above indicate expansion in the manufacturing segment of China’s economy; levels below 50 indicate contraction.

In China, HSBC publishes a “flash” PMI number around one week before the official PMI data is released. This week, the flash number came in a bit weaker than expected at 48.1, down from 49.6 for the month of February, an indication that manufacturing activity has contracted. The following chart tells the story: 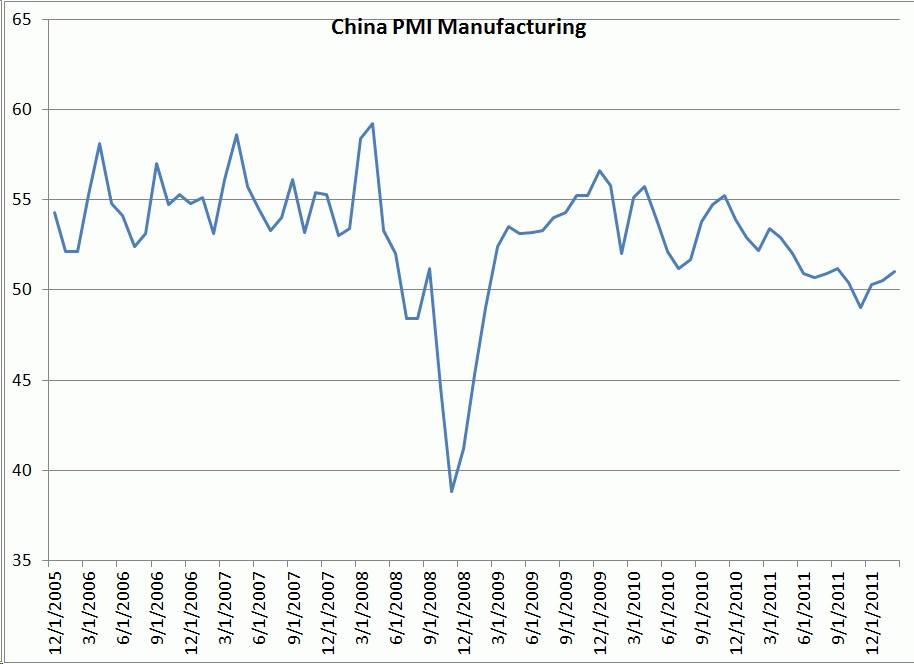 As you can see, the official Chinese Manufacturing PMI data is still above 50, at least through the month of February. However, this indicator has shown steady moderation since late 2010. If the official data, due for release Saturday March 31, were to dip below 50, it would exacerbate concerns that the Chinese economy is slowing at a greater rate than expected.

It’s important to note that the slowdown in China has been widely anticipated and reflects in large part the government’s efforts to slow growth and cool inflation. The Chinese government was clearly worried about a potential bubble in China’s housing sector.

What’s more, the steady rise in food and energy prices in the first half of 2011 caused considerable pain for consumers. Food in particular accounts for a much larger portion of the average Chinese consumer’s budget compared to a consumer in developed country’s such as the US.

I entirely agree with the assessment of our in-house emerging markets guru Yiannis Mostrous, as posited in his March 8, 2012 piece, “China Ascendant Despite Slowdown.” While Chinese economic growth is slowing, it’s still likely to manage growth in the 7 percent to 8 percent annualized range over the next few years, an impressive pace by any historic yardstick. Concerns about growth in China are way overblown and there’s nothing in the data to suggest that the country’s economy is truly in for a hard landing.

As for Europe, I have long held the view that the EU would experience a recession in 2012 even though the US is likely to avoid that fate. The data out of Europe continues to support my recession call – check out the chart, below. 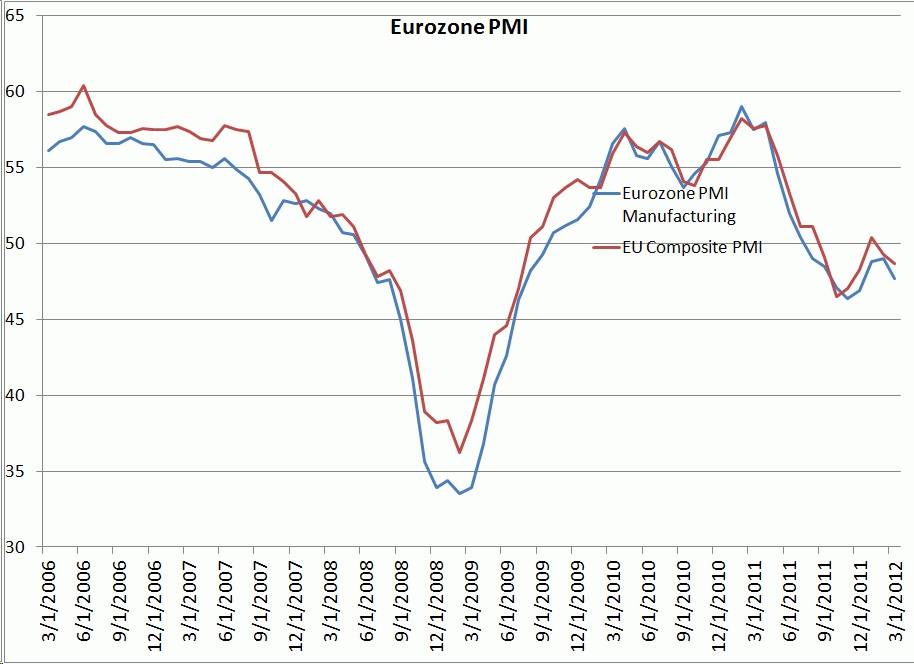 This chart shows the Eurozone PMI for Manufacturing and the Eurozone Composite PMI that covers both the manufacturing and services sides of the economy. As you can see, the European PMI data has been well below the key 50 level for some time. A brief bounce into early 2012 was likely the result of improved EU credit conditions but that positive impact appears to be fading.

Within Europe, the German economy remains relatively strong but one country can’t power the entire Continent. Not surprisingly, data out of southern European nations such as Italy and Spain have deteriorated to the extent that these nations are already likely in recession.

Another worrying development out of Europe is the recent jump in Spanish government bond yields – check out the chart here. 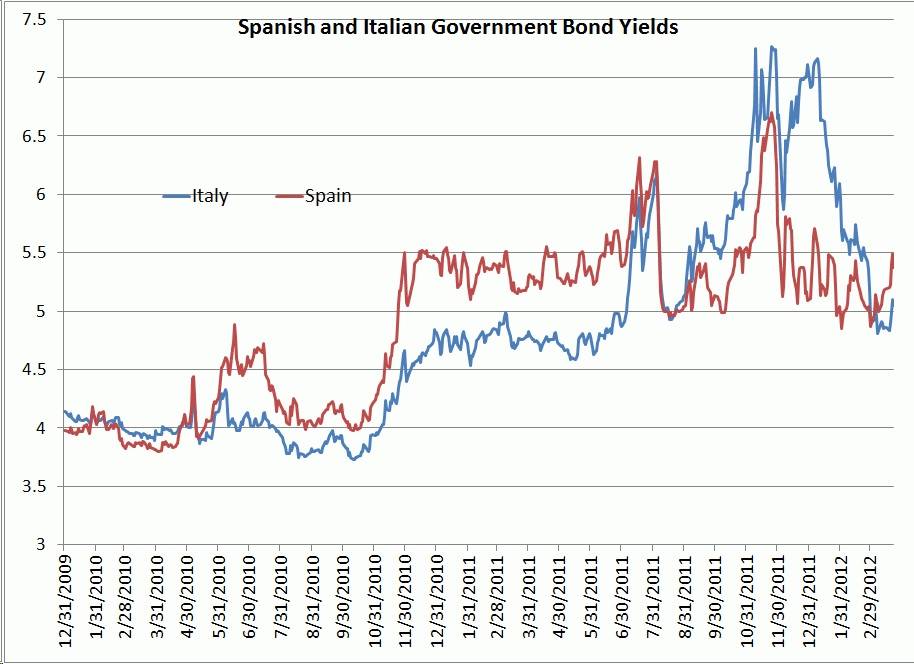 This chart depicts the yield on Spanish and Italian government bonds going back to early 2010. Arguably the largest factor driving last year’s mid-year stock selloff was the spike in European sovereign debt yields to unsustainable levels over 7 percent. Investors undoubtedly remember how sensitive the market was to every headline out of the European Union. The endless conflicting signals from various EU officials in the final six months of 2011 caused extreme stock market volatility.

My thesis on the European credit crisis has always been that the EU would eventually take all of the steps needed to prevent the sovereign debt debacle from turning into a repeat of the global credit freeze-up of late 2008. The European Central Bank (ECB) apparently stumbled on the secret sauce when it introduced the Long-Term Refinancing Operations (LTRO), essentially a program that allowed EU banks to borrow from the ECB at ultra-low rates for five years.

Almost immediately, LTRO resulted in a big drop in Spanish and Italian government bond yields back down to the 5 percent level by early 2012. Stresses in the interbank funding market eased and the move was one factor igniting a big rally in global equity markets.

Investors need to remember that the LTRO hasn’t really solved the problem of excess government debt in economically troubled countries such as Italy and Spain. Instead, the ECB has effectively eased the stress on banks and governments, buying them more time to implement longer-term reforms. Some have less generously characterized the ECB’s actions as kicking the can down the road.

The Italian government under its technocratic Prime Minister Mario Monti appears to have been successful in convincing the market that Rome is serious about implementing reforms to reduce the country’s large debt burden and bring its deficit under control. In particular, the government has been willing to enact serious labor market reforms, including an overhaul of the nation’s social security system and measures that make it easier and less expensive for employers to hire and fire workers.  As a result, Italian 10-year government bond yields continue to trade near 5 percent.

The center of market concerns is now Spain. To the dismay of its fellow EU member states, the incoming government rejected the prior deficit target commitment of 4.4 percent of GDP, eventually settling on a higher 2012 deficit target of 5.3 percent. In addition, economic data out of Spain has continued to deteriorate, with unemployment reaching a Eurozone high of 22.85 percent as of the end of 2011. With the economy clearly in recession, it’ll be a harder task for the government to meet its deficit reduction goals or introduce even more fiscal austerity measures.

The rise now in Spanish government bond yields is modest in comparison to the spike witnessed in early 2011. But Spain’s troubles are an unwelcome reminder that the EU sovereign debt crisis that hit markets hard in 2011 is far from solved. The potential certainly exists for more market shocks emanating from Europe in coming months.

My advice for handling this stock market pullback remains unchanged – investors should consider selling a portion of their stake in stocks that have been big winners. You do not have to sell out of your entire position, but selling 25 percent to 50 percent of your shares to book some profits in a strong market backdrop is a prudent move.

In the March 2, 2012 issue of PF Weekly, I used Energy Strategist recommendation SandRidge Mississippian I (NYSE: SDT) as an example of one of my recommendations that had simply run up too far, too quickly. I originally recommended buying the stock in early October of 2011 and, at its highs in early February SandRidge was up more than 60 percent from that recommendation. The problem was that at close to $37 per share, this trust was hopelessly overvalued and far above my buy target of $30 per unit. I cut my rating on SandRidge Mississippian I to a Hold and recommended selling out of at least half of your position.

Since then, SandRidge Mississippian I has fallen back to Earth. By following this simple strategy, you could have locked in impressive gains and would now have considerable idle cash to deploy to buyi other income-producing trusts trading at more reasonable valuations.

It’s not too late and many stocks still trade close to their 2012 highs. Investors should take a hard look at all of their holdings. If you bought stocks in the third or early fourth quarter of last year, you’re probably sitting on big winners. Some technology and energy stocks I follow, for example, are up 50 percent to 70 percent from their October lows.

Consider selling between 25 percent and 50 percent of your shares in some big winners. That will provide you with cash to buy stocks during a correction when prices are more attractive. There’s no harm in taking a few profits off the table now and again, and there’s no law that says you have to buy or sell your entire stake in a company in a single transaction.

For your next issue of Personal Finance (dated March 28), I asked our in-house options guru, Jim Fink, to contribute an article that demystifies the covered call strategy and provides specific examples of exactly how the strategy works.