The Market is Still Vulnerable

The S&P 500 surged to a new 2012 high over the past week but failed to hold on to those gains as the week progressed. Some of the market’s resilience is likely due to quarter-end “window dressing” with fund managers looking to buy winners to make their portfolios look better into the end of the first quarter.

Some pundits discount the importance of calendar and seasonal trends in the stock market but that’s a mistake in my view. The market often changes trends or character as the calendar rolls around to a new month or a new quarter. If that’s correct, some of this week’s early strength could be reversed next week.

The fundamental driver of weakness through the middle of the week was a slew of generally softer-than-expected economic data. In particular, the durable goods report released on Wednesday looked weak, showing growth of 2.2 percent in February compared to expectations for 3 percent.

If we remove the volatile transportation sector from the mix, durable goods orders rose 1.6 percent compared to expectations for 1.7 percent. These numbers come in the wake of a very weak January report showing a 3.6 percent decline in orders or 3 percent excluding transportation. The durable goods order is rather volatile and can be tough to predict but it’s important because it does impact overall economic growth.

Weekly claims data is notoriously volatile and can be skewed by unusual one-off factors. This is why, as with most economists, I watch the four-week average of initial claims more closely than the raw weekly numbers. On that basis, there isn’t yet a reason for much concern because the four-week moving average has fallen to about 365,000, its lowest level since early 2008 (see chart). I am looking for a solid March Employment report next week showing more than 200,000 jobs created. 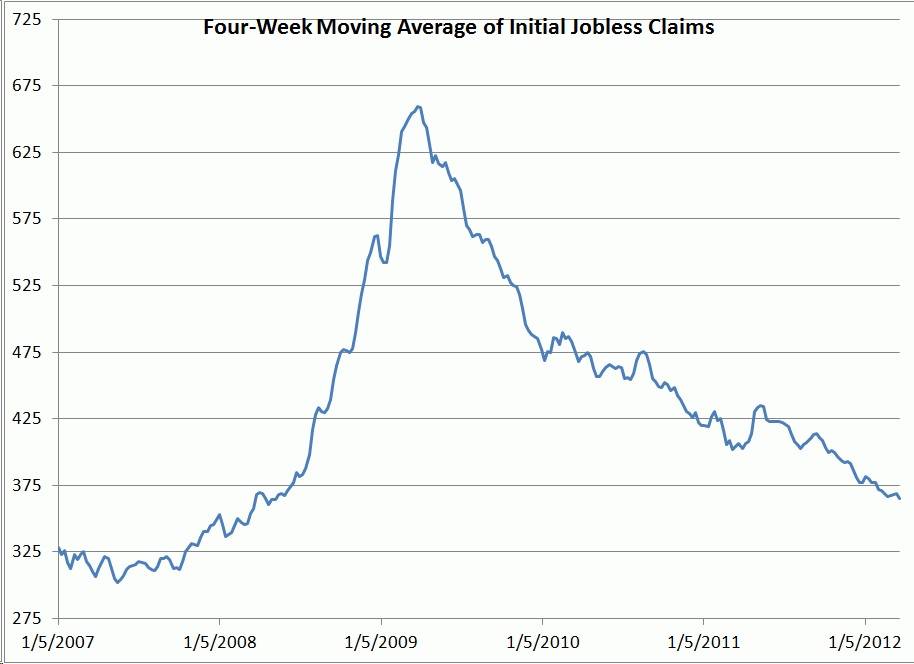 Finally, some of the regional manufacturing data released this week also looked on the soft side. For example, the Chicago Purchasing Manager’s Index released on Friday came in at 62.2, below expectations for 63 and down from 64 last month.

There’s nothing in the data released this week that warns of impending recession. My proprietary Recession Radar indicator remains under 10 percent, suggesting risks over the next 6 months remain at normal levels. However, this week’s data does show the continuation of a recent trend, whereby US economic data over the past few months has been coming in below expectations.

This trend is captured in the Citigroup US Economic Surprise Index that I’ve written about on several occasions in this e-zine. Check out the following chart: 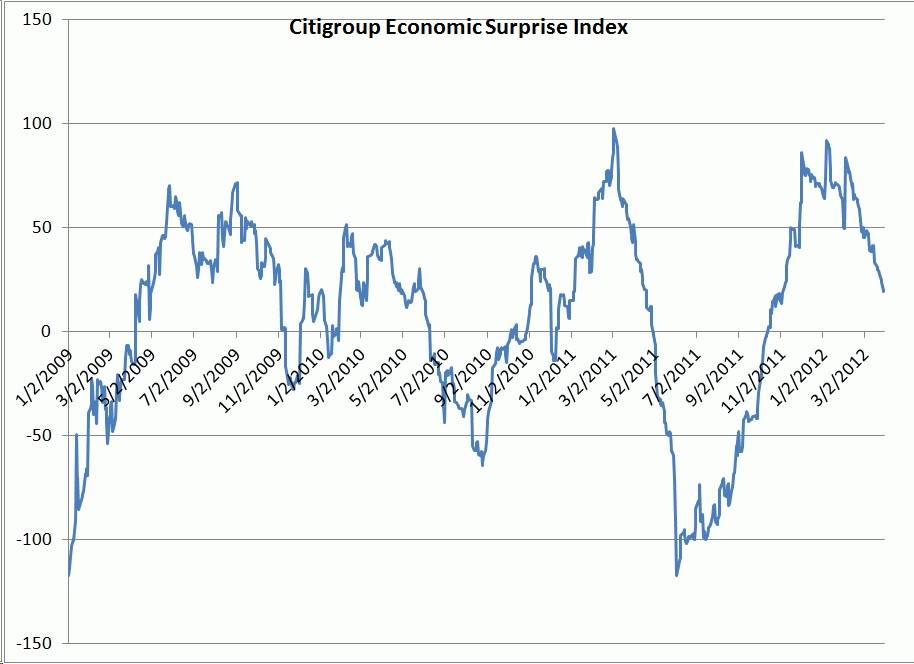 The Citigroup Surprise Index looks at a rolling three-month window of data. When data over this window of time is generally better than consensus expectations, the index value rises and the opposite is true when data comes in soft. Individual economic data points are weighted according to their historic impact on the markets.

The Citi Surprise Index bottomed out in June of 2011 and really began to accelerate to the upside in late August. The rise in the Surprise Index was the result of two major trends: excessively bearish economic forecasts from many pundits and a steady improvement in the actual numbers. Investors undoubtedly recall that in August and September of last year there were a number of economists calling for an imminent recession in the US and the mood in global markets was dour. It was fairly easy for the economy to beat those depressed forecasts.

The Citigroup Economic Surprise index topped out in December and January and has fallen sharply since the beginning of March. This deterioration isn’t the result of poor economic conditions; US economic data has been reasonably solid this year, especially in terms of employment.  However, what has changed is that consensus market expectations are much higher than was the case late last year. It has become far harder for the economy to surprise to the upside because most economists have become more sanguine.

The deterioration in the Citigroup Surprise Index isn’t a problem in its own right. After all, it’s only natural that improving data would lift consensus expectations to more reasonable, normal levels. Moreover, the severity of negative surprises is modest when compared to April and May in 2011.

What is a danger is that investors and economists get a bit too excited about the upside and mistake what have been some temporary tailwinds for a more durable, secular shift in the economy. The economy has picked up but growth is far from robust. This week, the government released its third and final reading on fourth quarter 2011 GDP growth showing the economy did grow at a 3 percent annualized pace, in line with prior estimates. That said the consensus is looking for a significant slowdown in the first quarter of 2012 to around a 2 percent annualized pace. Growth at that rate leaves the economy vulnerable to potential negative shocks.

I’ve highlighted a number of these potential headwinds in recent issues of PF Weekly and in Personal Finance. One is that the warmest winter in years is probably artificially enhancing some of the economic data out of the US. Warm weather is directly boosting some sectors, such as construction and housing.

In addition, most economic data is seasonally adjusted to reflect historic trends. For example, retailers typically hire seasonal workers late in the year and let them go early in the New Year. Initial claims and employment data are calculated to net out this effect because economists are really interested in the underlying trend. Some seasonal trends are tied to holidays but many are also tied to weather – fewer people look for jobs, for example, when the weather is poor.

This winter the weather has been pleasant for much of the season across much of the Midwest and Northeast. This is almost certainly throwing off the normal seasonal adjustments to some extent because the weather is far from “normal.” The only question in my mind is to what extent warm winter weather has improved the data.

Another prevalent hypothesis concerns distortions to seasonal adjustments caused by the 2008-09 economic collapse. In late 2008, as the credit crisis clobbered the market, the economy hit a huge air pocket and activity ground to a halt. Economic data is seasonally adjusted using historical trends; these adjustments would have been skewed by this phenomenon.

This hypothesis is tough to prove but has empirical appeal, because this distortion would tend to make adjusted data over the winter months look better and data over the summer months look worse. Over each of the past two years, the US economy has experienced a summertime soft patch and wintertime acceleration. These recent trends could be a statistical legacy of the Great Recession.

Looking ahead, the big market-moving event in April will undoubtedly be first quarter corporate earnings season. The unofficial kick-off for earnings season is Alcoa’s results, due on April 10. Although the bulk of the S&P doesn’t report until late April and into early May. One encouraging trend in this regard is that analysts have steadily revised down their S&P 500 earnings estimates since the beginning of the year; this chart tells the story. 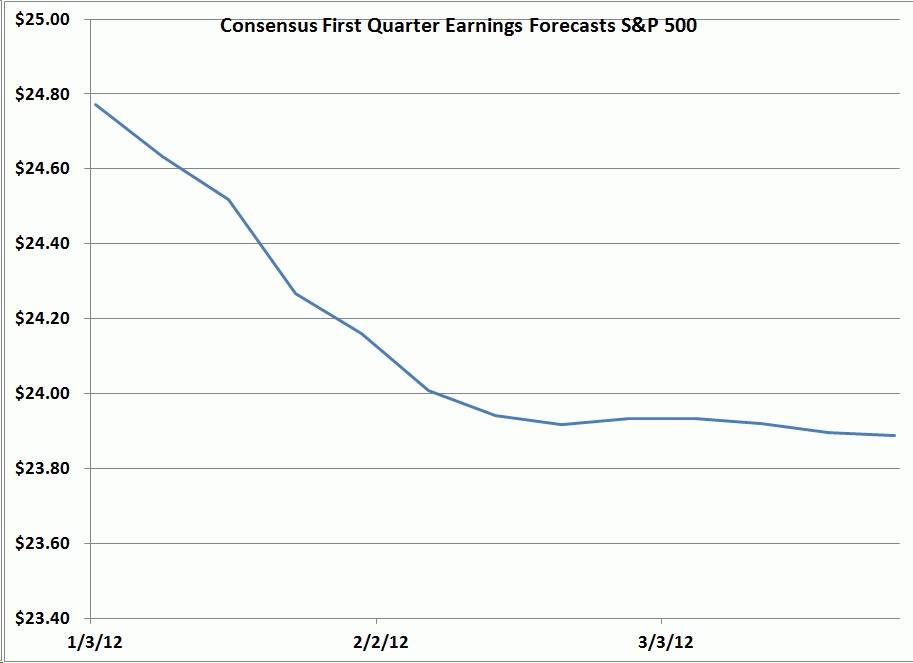 While negative earnings revisions are an ostensibly negative trend, it also means the expectations bar has been lowered, making it easier for companies to beat those expectations. When it kicks off in earnest at the end of the month, quarterly earnings season could be a significant upside catalyst for the stock market.

My outlook over the short-term hasn’t changed much in recent weeks. I was bullish on stocks throughout the fourth quarter of 2011 and into February of this year; I’ve since turned more cautious. The dramatic run-up in stocks since last October prices in a lot of good news on the economy and economic expectations are clearly becoming harder to beat. This trend could easily become worse as the boost from warm winter weather and seasonal adjustments fades in April and May. I see rising risks for a 5 percent to 10 percent broader market correction this month.

The best advice I can give in such an environment is to focus on money management. That means all investors should consider taking profits off the table in stocks that have run-up a large amount in recent months. You don’t have to bail out of all of your positions, but selling 25 percent to 50 percent of your stake can help you to lock in gains.

I’ve repeatedly warned in this e-zine, as well as in Personal Finance, MLP Profits and Energy Strategist, that some of the Master Limited Partnerships (MLPs) and US Royalty trusts I recommend including Kinder Morgan Energy Partners (NYSE: KMP), SandRidge Mississippian Trust I (NYSE: SDT) and Chesapeake Granite Wash Trust (NSDQ: CHKR) rallied too much, too quickly early in the first quarter and were well overdue a pullback.

All three of these names were, at one point over the past quarter, trading well above their respective buy target advice in the newsletters. I advised taking some profits off the table and waiting for a pullback to re-enter. All three have since pulled back dramatically, a good reminder of why it’s important to pare back on big winners from time to time.