Obamacare at Supreme Court: Healthcare Stocks Need “All or Nothing”

Healthcare stocks — as measured by the Health Care Select Sector SPDR (NYSE: XLV) — have struggled during the first quarter of 2012, rising only 8.2% which trails the S&P 500’s 12.2% gain by almost one-third. Concerns over pharmaceutical patent cliffs and the upcoming U.S. Supreme Court ruling on the constitutionality of Obamacare have weighed on healthcare stocks. In fact, healthcare has been the fourth-worst-performing industry sector out of the nine sector SPDRs:

This past week, however, guess which sector SPDR was the best-performing? Health care, and by a HUGE margin of more than twice the return of the second-place finisher:

Why the sudden reversal of fortune in healthcare stocks? The answer lies with the U.S. Supreme Court, which held oral arguments this week in the Obamacare case. There are two major constitutional issues under review:

Forcing the uninsured to buy insurance would be the first time in U.S. history that a U.S. citizen would be penalized for “inactivity” – refusing to buy something they didn’t want. Proponents of the mandate often trot out the regulatory requirement to buy auto insurance, but only people who drive a car are required to buy such insurance; drivers have taken an affirmative action to enter the car market and hence subject themselves to regulation. In contrast, people forced to buy health insurance have done nothing at all except be alive.

Consequently, the individual mandate is a gross abuse of the U.S. Constitution’s Article 1, Section 8, Clause 3 “Commerce Clause,” which strictly limits federal regulation to commerce “among the several states.” Ever since Congress passed the McCarran-Ferguson Act in 1945, insurance has always been regulated by the states, not the federal government.

The Supreme Court Will Likely Strike Down Obamacare

Observers of the oral argument have uniformly stated that a majority of Supreme Court justices appeared critical of the individual mandate provision and challenged the government lawyer defending the law much more harshly than they did the arguments of the contesting plaintiff lawyer. Justice Kennedy — commonly known as the 5-4 “swing vote” on the bench — asked the following question of Obama’s lawyer on pages 11-12 of the transcript:

This is unprecedented, this is a step beyond what our cases have allowed, the affirmative duty to act, to go into commerce. If that is so, do you not have a heavy burden of justification?

You are changing the relation of the individual to the government in a unique way. The reason this is concerning is because it requires the individual to do an affirmative act. In the law of torts, our tradition, our law has been that you don’t have the duty to rescue someone if that person is in danger. The blind man is walking in front of a car and you do not have a duty to stop him, absent some relation between you.

Based on academic research, the Supreme Court has historically been much more likely to rule against the side it asks more questions of during oral arguments. A “state of the art” model based on oral-argument language and tone predicts that the Supreme Court will declare the individual mandate unconstitutional by a slim 5-4 margin.

Obamacare is highly unpopular with the American people. In a recent poll, 75 percent of Americans wanted the Supreme Court to strike it down.  Ironically, even Obama opposed an individual mandate during the 2008 presidential campaign before doing a 180-degree flip-flop once he was elected president. On the other hand, the public overwhelmingly supports barring insurance companies from denying health coverage based on a pre-existing condition by an 85-15 margin.

The problem is that you can’t have one without the other without destroying the profitability of insurance companies. Absent an individual mandate, the result will be “adverse selection,” whereby healthy people will opt out of the insurance program while sick people will enroll. A profitable insurance market is based on uncertainty where more people pay into the system than is paid out in claims.  If the only people who enroll are those who are certain to make reimbursement claims based on pre-existing conditions, insurers will end up losing money because the government-regulated insurance premiums won’t be sufficient to cover all of the claims. In their 11th-Circuit Court of Appeals brief (page 30), Obama’s own lawyers have cited Princeton University professor Uwe Reinhardt for the proposition that:

It is well known that guaranteed issue coupled with voluntary insurance tend to lead to a death spiral of individual insurance.

For this reason, the Obama administration has argued that requiring insurance companies to accept pre-existing conditions should not survive if the individual mandate is struck down.

In Healthcare Reform: the $700 billion Lie, I argued that the cost of Obamacare will be much greater than advertised, but even taking that understated number at face value greatly concerned swing vote Justice Kennedy, who exhibited sympathy for Alito’s question. Kennedy asked a follow-up question on pages 42-43 of the transcript:

I still don’t understand where you are with the answer to Justice Alito’s question. Assume that there is a substantial probability that the 700 billion is going to be cut in half if the individual mandate is stricken. Assume there is a significant possibility of that. Is it within the proper exercise of this Court’s function to impose that kind of risk [on the insurance industry]? Can we say that the Congress would have intended that there be that kind of risk?

I think the reason healthcare stocks have rallied so strongly this week is because investors have concluded that the entire Obamacare monstrosity is going to be struck down – not just the individual mandate, but also the requirement to enroll people with pre-existing conditions, the expansion of Medicaid, and the medical loss ratio minimums that limit insurance company profits to 20% of insurance premiums collected.

Bottom line: healthcare insurers were going to do fine under Obamacare because the individual mandate and Medicaid expansion requirements promised to greatly increase industry revenues and counteract the pre-existing condition and medical loss ratio cost burdens. Similarly, healthcare insurers will do fine if Obamacare is struck down because free markets allow companies to generate profits unrestricted.

The only scenario where healthcare insurers were going to be hurt badly was if the individual mandate was struck down but the pre-existing condition and medical loss ratio provisions remained (i.e., severability). Since severability is almost certainly off the table given what transpired this week during the U.S. Supreme Court’s oral argument, investors have a “green light” to invest in healthcare stocks regardless of whether Obamacare is upheld in its entirety or struck down in its entirety.

“All or nothing” — the key to healthcare profitability – appears assured. 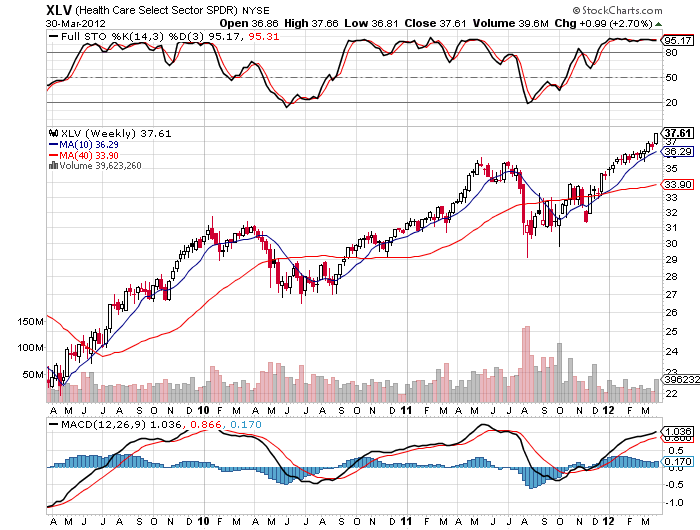