Spain and US Employment: Twin Catalysts for a Correction

There aren’t many bright spots to report in the March employment numbers released on Friday, April 6. Strengthening economic data out of the US has been one of the main pillars of the global stock market rally since last October; the March report is the first major dent in that bullish argument.

I continue to look for a 5 percent to 10 percent broader market correction over the next few months and recommend investors take steps to protect gains generated during the historic rally off last October’s panic lows.

The March data is clearly poor, when you consider that private payrolls have been growing at an average pace of about 250,000 in each of the last three months, about twice the March pace.

As the chart below illustrates, March marks the weakest employment gains for the US economy since October of last year. 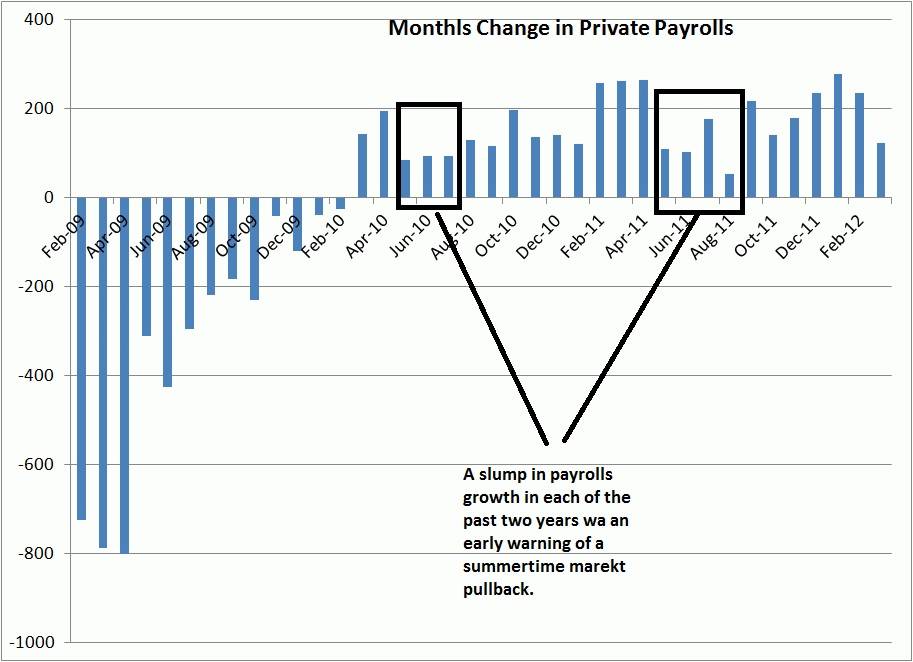 In each of the past two years, the US economy has encountered what many economists dub a “soft patch” in economic activity. This isn’t anything abnormal – in every economic expansion the economy alternates between months of acceleration and those of stagnation. However, the economic soft patches in summers 2010 and 2011 catalyzed major stock market sell-offs, because the trend rate of economic growth was already lackluster. With the economy stumbling along at 2 percent, even a modest slowdown leads to premature calls for a new recession.

Payrolls data from the BLS is notoriously volatile from month-to-month and I believe that the March number will ultimately be revised higher to show better jobs growth. That said, as the chart shows, the drop-off in employment in March is eerily reminiscent of the payroll declines in spring 2010 and 2011. In both cases, deteriorating employment trends were an early sign of an economic soft patch and a significant stock market correction.

One of the biggest mistakes casual observers make is to extrapolate major changes in trends from a single economic data point. The monthly employment numbers released by BLS are arguably the most widely watched economic data series anywhere in the world, given the importance of the consumer to the world’s largest economy. For now, the weak March number appears to be an outlier – check out this chart below: 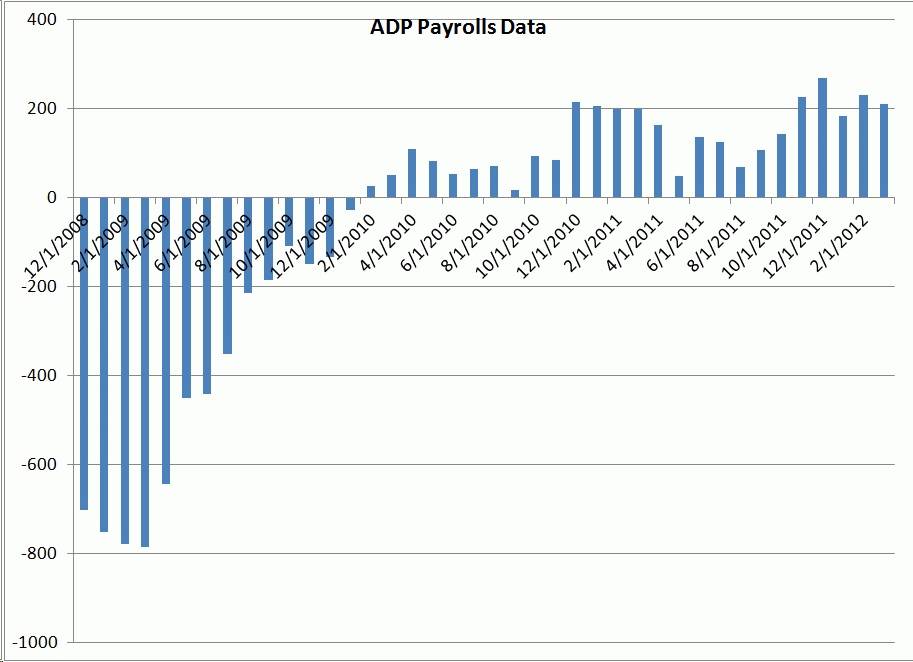 Payroll processing giant ADP releases its own monthly employment report a few days before the BLS. The official government data is more of a market mover than ADP’s; some economists ignore the latter’s release altogether.

I think that’s an enormous mistake. Over the past few years, I’ve noticed that ADP numbers have tended to lead the BLS data. In months where there has been a big discrepancy between the ADP and BLS data, the official government numbers are revised months later to be more in alignment with ADP’s. As the largest payroll processor in the US, ADP is in an excellent position to gauge trends in payrolls over time.

The good news this month is that ADP showed more than 200,000 job gains in March, more akin to what the consensus expected. Coupled with the continuing downtrend in jobless claims, this development suggests the government eventually will revise March employment data significantly higher.

Regardless, the March employment numbers highlight a troubling trend for stocks. One of the cardinal rules of investing is that the market’s reaction to economic news is often more important than the news itself. If the market rallies to close well off its lows in the wake of weak economic data, that’s often a sign that the bad news is already priced into shares. However, if the market can’t make much upside headway in the face of good news, that’s a sign that a lot of that good news is already priced in.

Late in 2011, my basic argument was that the market was pricing in a grim outcome for Europe, the US fiscal situation and the global economy; actual trends in the hard data looked far better than prevailing sentiment. With the market’s mood so dour, it only took a few mediocre data points to send stocks sharply higher.

Today, the opposite scenario is in place: after the largest first quarter run-up for the S&P 500 since 1998, stocks are pricing in a great deal of good news. The spike in US Treasury bond yields that I highlighted in the March 16 PF Weekly indicated that investors were buying into the idea that the US was entering a sustainable economic expansion. In such an environment, it doesn’t take much disappointing news to prompt a wave of profit-taking and a broader market correction.

In last week’s issue of PF Weekly (“The Market is Still Vulnerable”), I pointed out just how vulnerable the market has become given all the positive sentiment. Sentiment has become so bullish that economic data is no longer offering as many positive surprises as was the case late last year.

Unfortunately, the March employment data also lends credence to another troubling trend I explained in last week’s issue: seasonal distortions. Most economic data is seasonally adjusted to smooth out normal fluctuations such as increased retail hiring during the Thanksgiving and Christmas holidays. However, the unusually warm winter in 2011-2012 has almost certainly altered the normal seasonal patterns in some industries affected by weather, such as home construction. Seasonal adjustments likely boosted payroll growth from November through February.

As winter draws to a close, seasonal adjustments will become less of a tailwind for stocks. The sudden drop-off in payroll gains in March suggests that may already be happening.

The Rain in Spain

Another continuing risk I’ve been highlighting is the potential for the European sovereign credit mess to once again hurt stocks. The European Central Bank (ECB) finally stumbled on a useful policy tool in the form of its three-year loans to banks at a 1 percent interest rate, known as the Long-Term Refinancing Operations (LTRO). Some of the money loaned to banks was invested in bonds issued by countries such as Spain and Italy. At the end of 2011, an EU bank could borrow money at 1 percent from the ECB and buy sovereign debt yielding more than 7 percent, an impressive carry trade.

The LTRO bought the EU some breathing room. What’s more, many countries including Italy have implemented meaningful fiscal reforms this year. However, the LTRO didn’t solve the underlying problem and there’s a good chance we’ll see more credit stress emanating from Europe this year.

Last year, Italy was in the market’s cross-hair but in 2012, investors should keep a close eye on Spain.

The chart shows the yield on 10-year Spanish and Italian government bonds going back to early 2009. The yields on both countries’ debt spiked above 7.5 percent on an intra-day basis during the height of last year’s credit crisis. However, the yield on Spanish debt tended to be a bit lower than for Italy, because the latter country was seen as the bigger problem child.

The peak in yields came just before the ECB announced its LTRO at the end of last year. At one point this year, Italian and Spanish 10-year bond yields plummeted under 5 percent, nearly some 200 to 300 basis points off their highs.

However, over the past few weeks, the yields on both countries’ sovereign debt has spiked again. This time, Spanish yields are leading the way higher. While the run-up in yields isn’t even close to as severe as was the case last year, it’s a worrying trend and underlines the fact that the EU credit markets are still far from normal.

There are valid reasons to worry about Spain. The foremost concern is the country’s deficit, which is projected to be 5.7 percent of gross domestic product (GDP) this year compared to just 2.2 percent for Italy. Meanwhile, Spain’s unemployment rate stands at close to 25 percent, a Eurozone high. By comparison, Greek unemployment is around 20 percent and unemployment in Italy is less than 10 percent.

For younger Spaniards, the job market is even grimmer with unemployment as high as 50 percent. Spanish government debt is around 70 percent of GDP but that understates the true problem – a massive housing bubble and high household debt continue to bedevil the banking system. It’s not yet a full-blown crisis, but Spanish yields are worth watching.

Consider taking some profits in your big winners and increasing your allocation in more defensive groups such as master limited partnership (MLPs), consumer staples and healthcare stocks. Yield-oriented names should continue to outperform in such an environment.

A silver lining in these clouds is that some of my favorite high-yield US trusts and MLPs have now pulled back off their recent highs. After spending much of February and March at ridiculous valuations well above my buy targets, we’re close to a buying opportunity in these groups.