Stocks are down so far in April. After jumping to a four-year high on the first trading day of the month, the S&P 500 dropped a cumulative 4.3 percent – its worst multi-day decline since November 2011 — after suffering losses for five consecutive days culminating in Tuesday’s worst one-day loss of 2012. The trigger was three-fold: (1) the Federal Reserve’s March meeting minutes showed only “a couple” of the Fed’s 10 voting members in favor of further quantitative easing compared to “a few” in the January meeting minutes; (2) weak bond auctions in Spain and Italy (i.e., higher interest rates) raising fears of a resumed Euro debt crisis; and (3) a weak March U.S. employment report combined with a voting Atlanta bank president member of the Federal Open Market Committee stating that the report wasn’t weak enough to justify QE3.

The worst scenario would be a weakening economy combined with no additional monetary easing and fear that this scenario was coming true caused the stock selloff. Starting on Wednesday, however, the stock market suddenly reversed course and generated its best two-day gain of 2012.  The trigger were statements from Fed Vice Chairwoman Janet Yellin and New York Fed President Bill Dudley that a highly accommodative Fed monetary policy remains warranted for a considerable period of time, with Yellin speaking favorably of maintaining the zero interest rate policy (ZIRP) into 2015. Neither Fed member specifically mentioned QE3, however, with Dudley even cautioning against it, so I’m not sure why the market reacted so positively to their remarks.

(4) The Global Financial Stress Index signals investors are likely to shift into “risk off” assets and away from “risk on” stocks; and

(5) an Iran-Israel war breaks out that causes oil prices to hit $200 per barrel or more.

On the bright side, given the tremendous bullish market momentum between October 2011 and the end of March 2012, a 5-to-10 percent correction would probably be a pause that refreshes rather than the start of a bear market. Wall Street equity strategists are bearish, which historically has been an excellent contrarian signal that sends stocks even higher. 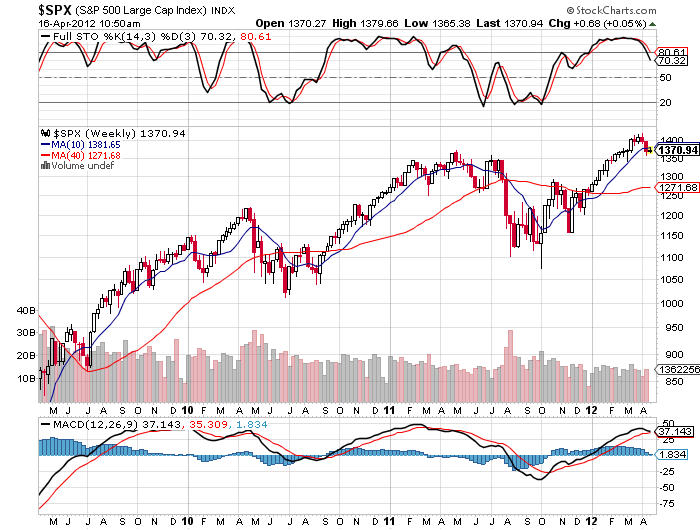