US Housing: Bottoming, Not Booming

In the autumn of 1999 I found myself fresh off the plane from the United Kingdom, searching for a rental apartment in the Northern Virginia area.

Back then it was still common to look for apartments in the newspaper so I picked up a copy of the Washington Post and saw a big problem: each week there were no more than 5 to 10 apartments for rent in the entirety of Northern Virginia. What’s more, actually renting a place was a nightmare – a dozen people would turn up at 7:00 a.m. on Saturday morning to look at an apartment and if you weren’t willing to write a check for three months rent on the spot, you were out of luck.

A few years later, renting was out of favor and the residential real estate bubble was in full swing. After all, why bother renting when you can borrow money at ultra-low interest rates, put no or very little money down on your new home and deduct the interest from your taxes?

You didn’t even need to have a job to buy a home. NINJA loans—an acronym for no income, no job and no assets—are a poster child for the excesses of the boom years.  Serious buyers became intimately familiar with the escalation clause that automatically raised your bid on a home, helping you outbid other buyers.

The following chart shows the Case-Schiller 10-City Home Price Index, a measure of residential home prices in the 10 largest US metropolitan areas. I’ve drawn a simple statistical trendline using the data from 1987 to the present. This trend gives you a good idea of what could be considered a “normal” rate of residential real estate price increases. 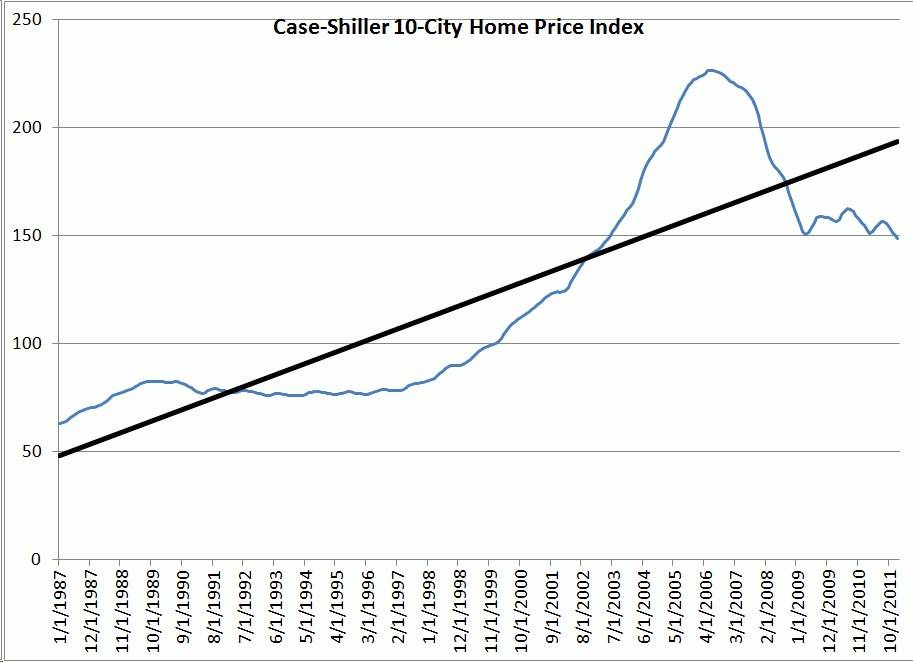 You can clearly see that home prices increased at a below-trend rate in the early and mid-1990s, only to accelerate in the latter half of the decade. The housing market really got silly starting in 2002-2003, as ultra-low mortgage rates and easy credit conditions prompted prices to rise at a pace far above their long-term trend.

As a rule of thumb, markets have a tendency to overshoot fair value both on the way up and the way down. The housing slump of 2006-2012 has pushed US home prices back well below their long-term uptrend but that’s a necessary part of the adjustment and healing process. The excesses of the prior boom must be corrected before the housing market can be healthy again.

This year one of the bullish arguments I hear most frequently is that housing, the market most directly associated with the 2007-2009 financial crisis, is finally bottoming about six years after housing prices started to fall.

I agree with the bulls that US home prices are close to a low. After all, the Case-Shiller 10-City index in my chart above has been tracing out a jagged bottom since early 2009 and prices are already back to 2002-2003 levels, the year the housing boom took off.

However, there’s a big difference between saying the market is bottoming and sounding the “all clear” for a new bull market in home prices. The US housing market isn’t getting worse, but it also isn’t improving much.

The chart below shows US existing home sales since 1980. The pattern in this chart is similar to that of my chart of home prices—sales rose at a slow but steady pace up until the late 1990s and then went parabolic. The subsequent housing crisis snapped this uptrend and existing home sales returned to their levels of the early 1990s. 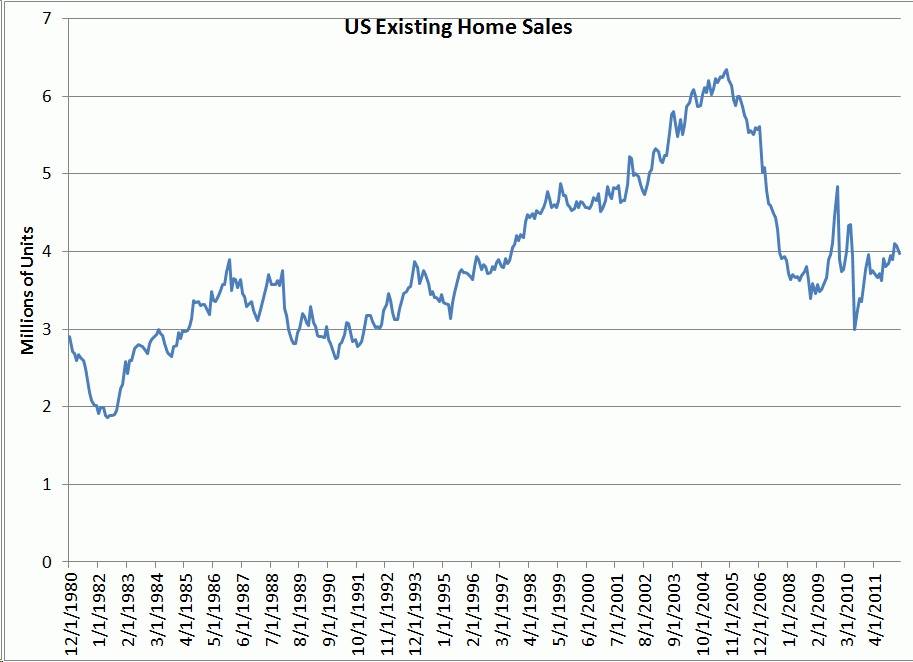 In the 2009-2010 period, the government offered incentives to homebuyers that helped create a temporary spike in sales followed by a post-subsidy collapse. But if we exclude that distortion, existing home sales have mounted a slow recovery since 2009, climbing from about 3.5 million to 4 million units. While that’s a positive trend, investors should put the recovery into perspective: existing home sales are still at 1996-1997 levels and the recovery has been and will continue to be achingly slow despite ultra-low mortgage rates.

The picture for new home construction and sales is no better, as the next chart reveals. 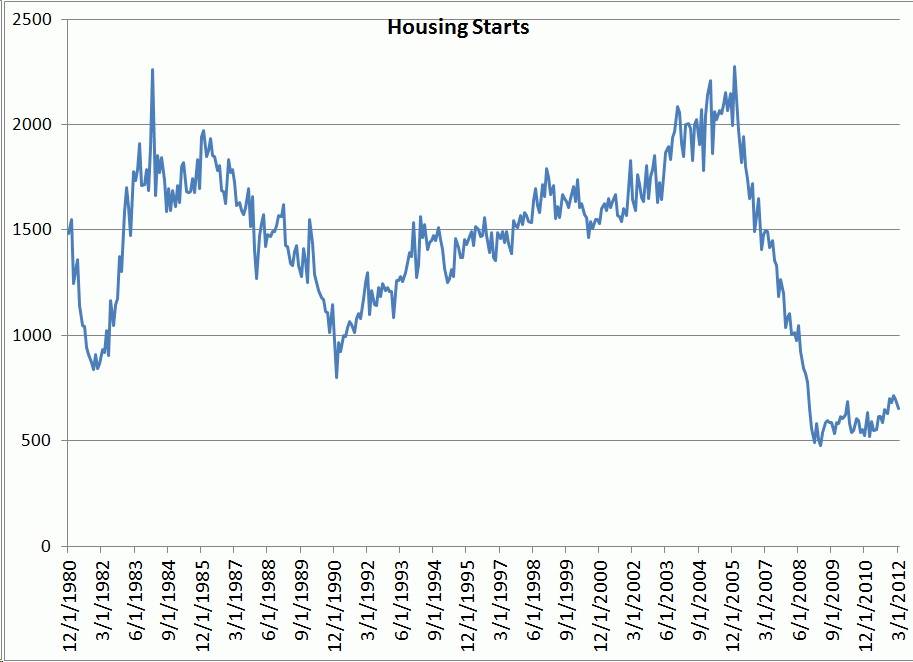 This chart shows US housing starts—a measure of the number of new housing units starting construction—going back to 1980. While the recovery in construction over the past couple of years is visible on the right edge of this chart, housing starts are still lower today than at almost any period in the past 30 years. This is clearly a U-shaped rather than V-shaped housing recovery and it will take time for starts to improve to what might be considered a normal, healthy level.

More broadly, the US housing market is finding a sustainable equilibrium. During the housing boom, a large number of unqualified borrowers bought houses they simply couldn’t afford. The attraction of the “American Dream” of homeownership and the potential to speculate on the red-hot housing market prompted many people to shun renting and buy their first home with limited savings cushions.

That’s an example of false prosperity built solely on credit. In 1965, around 64 million housing units existed in the US with roughly 55 percent to 56 percent occupied by owners, 33 percent to 34 percent by renters and the remaining 10 percent or so were vacant. Of those vacant homes, about one third was vacant because they were intended for seasonal use—e.g., as summer homes.

At the height of the housing boom in late 2005 and early 2006, around 125 million housing units existed in the US with more than 60 percent of those units owner occupied. An even more dramatic change: only about 26 percent of US housing units were rented, a modern low for the rental rate.

By late 2011, the US homeownership rate had declined significantly from its bubble-era highs. With over 130 million housing units available, less than 57 percent are owner-occupied, with 29 percent occupied by renters.

Even scarier for some readers: many younger Americans are choosing not to enter the housing market at all. The homeownership rate for those 35 and under has fallen from more than 42 percent in 2006 to less than 38 percent today. The Census Bureau estimates that more than 14 percent of all young adults aged 25 to 34 years were living with their parents in 2010, up from about 10 percent in 2004-05.

This adjustment process has already seen significant progress but there’s more to come. Ultimately, the US housing market will return to a more balanced state of renting and homeownership. I have no doubt that many of those younger consumers living with their parents are itching to move out and rent an apartment as soon as possible; it’s equally likely that many parents are anxious to see their children start a new household. As the economy recovers and unemployment declines, the number of younger Americans living at their parents’ home should begin to fall as well.

In addition, younger consumers just entering the workforce and other consumers with less than perfect credit and limited savings will choose to rent homes rather than buy. Part of this shift is due to the simple fact that it’s much harder to get a mortgage these days than it was at the height of the boom; few would argue in hindsight that NINJA loans were always a bad idea. But another factor at work is that consumers no longer regard a home as a speculative asset or a “can’t lose” proposition that will always gain in value.

Rental rates will, over time, rise to their historic average levels closer to one-third of the housing stock while the homeownership rate still has more room to fall. The number of vacant homes in the US—currently at just under 14 percent of the total—should also fall as homes are converted into in-demand rental properties or sold at prices that reflect a reasonable market value. These adjustments are underway but, as current housing statistics illustrate, the bottoming process will take time.

This is good news for the country’s banks. As weaker borrowers see their homes foreclosed and credit conditions tighten for new borrowers, credit quality is improving, as this chart shows. 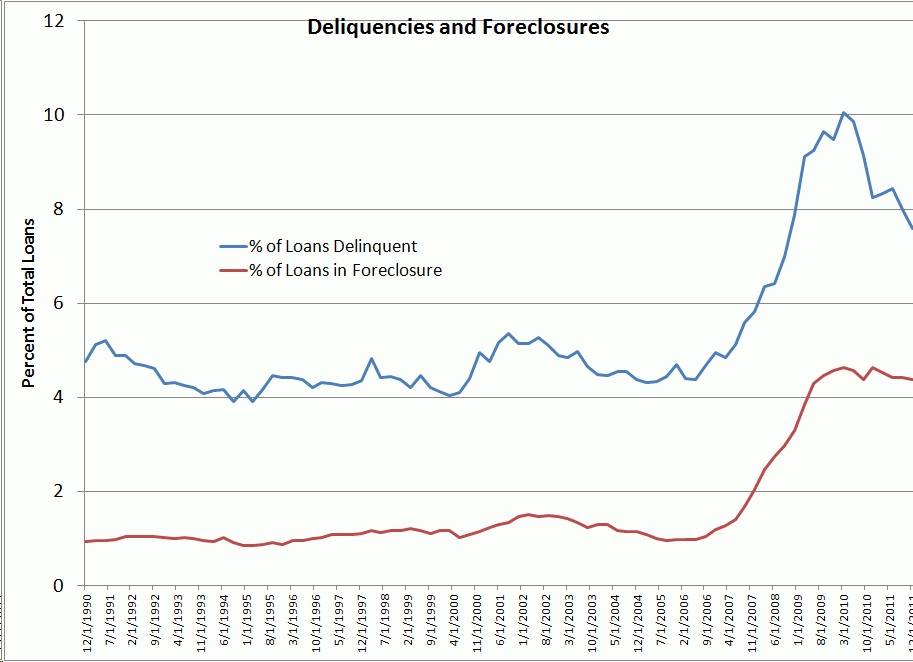 The good news on this chart is that the number of US mortgage loans that are seriously behind on their mortgage payments has plummeted from over 10 percent at its 2010 highs to closer to 7.5 percent today. Of course, that still represents close to twice the average delinquency rate of the pre-crisis era but it’s rapidly moving in the right direction as banks clear bad loans from their books.

Positive trends are underway in the extremely important US housing market, which is undoubtedly bottoming. However, housing remains far from what anyone could consider healthy and additional recovery from the excesses of the 2000-2007 period will be needed to put housing on a firmer footing. Prognostications that the US housing market will be a major tailwind for US gross domestic product (GDP) growth are at least a year premature. It’s time to temper your enthusiasm.

Over the past few weeks, I’ve received several queries from subscribers concerning the IPO of SandRidge Mississippian II (NYSE: SDR), a US royalty trust that I covered in depth in the January 25 Investing Daily article “Energy Investing: Eagerly Awaiting the IPO of SandRidge Mississippian Trust II.”  I wrote that I expected this high-yield trust to go public in early April; it listed for trading on April 18.

As I explained in a flash alert to Energy Strategist readers earlier this week, SandRidge Mississippian II (NYSE: SDR) priced at $21, the high end of its proposed $19 to $21 valuation range; the trust also up-sized its offering from 25 million to 26 million units, a sign of strong demand for the issue.

SandRidge Mississippian II will likely distribute about $2 per unit in 2012, which equates to a 9.5 percent yield at the stock’s current price. We expect the trust to pay out almost $3 per unit in 2013, equivalent to a yield of more than 14 percent at current levels.

Finally, one of the most important events to watch over the next few days is the French presidential election, with the first round slated for April 22 and the second for May 6. The most likely scenario is that center-right leader President Nicolas Sarkozy and his Socialist opponent Francois Hollande advance to the second round; current polls suggest that Hollande would defeat Sarkozy in a two-way match-up, although polls have narrowed a bit and the French are famous (or perhaps infamous) for delivering electoral surprises.

It appears that the markets already are pricing in a Hollande win, which would usher in greater government spending and a reversal of Sarkozy’s austerity measures. I will watch the French sovereign bond and credit default swaps markets particularly carefully over the next few weeks, as the election cycle continues. The potential looms for this election to precipitate a jump in French borrowing costs or to destabilize the still-precarious EU credit markets, with severely negative ramifications for global stock markets.