LG Display: On the Ropes But Still Slugging

In the May 16 issue of The Global Investment Strategist, I explained that shares of South Korea’s LG Display (NYSE: LPL) are trading at undemanding valuations and warrant a look.

The company is one of the leaders in the thin film transistor liquid crystal display (TFT-LCD) panel market with a 22 percent global market share.

LG Display’s shares have been falling as a wave of bad news clobbers the company. First-quarter results were not as good as expected and delays have plagued the company’s iPad3 panel supply. Even worse are reports that South Korean prosecutors raided LG Display’s headquarters, to determine whether it had illegally obtained technology from other companies. Investors will remain cautious until the matter is resolved.

The company recently reached a settlement in the US over LCD maker price-fixing claims and also is on the verge of settling a class-action lawsuit brought by consumers. The stakes could be high: last December, seven LCD makers agreed to pay several US states a total of USD539 million to settle price-fixing claims.

If LG Display sets aside about USD170 million for settlement provisioning, as seems necessary, the company is likely to report an operating loss rather than an operating profit (as was expected here) in the second quarter.
For the first quarter of 2012, the company reported an operating loss of USD153.79, as shipments declined by 3.9 percent quarter over quarter, stemming from a decline in TV sales and a glitch in iPad3 panel production. LG Display posted first-quarter sales of USD5.2 billion, down about 6 percent QoQ. One positive first-quarter result was the drop in inventory; see chart below. 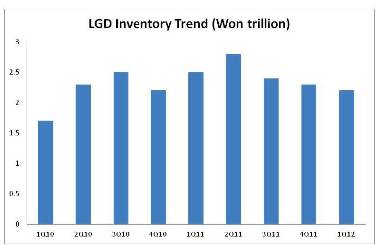 Despite its current woes, LG Display enjoys many long-term advantages. Inventory has been declining, LCD panel prices have been picking up, the company’s iPad3 panel supply is back on track, and the company has enough cash on hand to cover its non-operational obligations. Finally, LCD TV demand is growing and global PC shipments have been rising.

Pending legal issues may inhibit the company’s ability to post an operating profit in the second quarter, but these problems are ephemeral. The table is set for LG Display to post solid revenue, in the second quarter and beyond. An eventual return to profitability won’t be far behind. LG Display is a turnaround technology story and remains undervalued.