When to Buy Homebuilder-Related Stocks

The homebuilders sector has an exchange-traded fund (ETF), the SPDR S&P Homebuilders (NYSE: XHB), which can be used as an index proxy for the sector. The fund is only a little over six years old, so it doesn’t reflect a deep history of data. However, after its debut in February 2006, XHB has captured almost all of the housing bubble collapse and subsequent activity.

For investors considering the fund, a seemingly relevant metric would be new home sales data, which is reported monthly by the U.S. Census Bureau. The following graph shows that there is an expected relationship between the numbers of new home sales and the price of XHB. 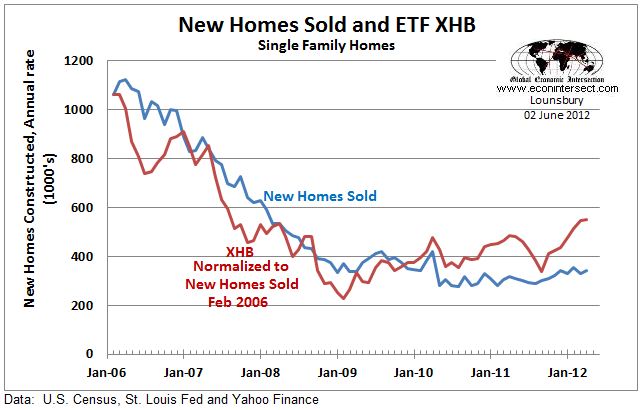 However, what appears at first glance to be a slam-dunk requires further examination.

The first question is whether the data that is announced early in the fourth week of each month can be used as a signal for buying XHB. If so, then the price of XHB a few days later at the end of the month should show some correlation to the change in the number of new home sales. XHB would be up for the month when new home sales increased and down when they decreased.

The Census Bureau announced the most recent new home sales data, for the month of April, on May 23. The question we ask is, does the change in new homes sales month-over-month (seasonally adjusted) have any relationship to the price change in XHB for the month of May? We will also address later whether there is any effect on the next full month after, which in the case of this example will be June.

The following graph shows the correlation diagram for plotting monthly changes in XHB on the y-axis against the changes for the previous month in new home sales. 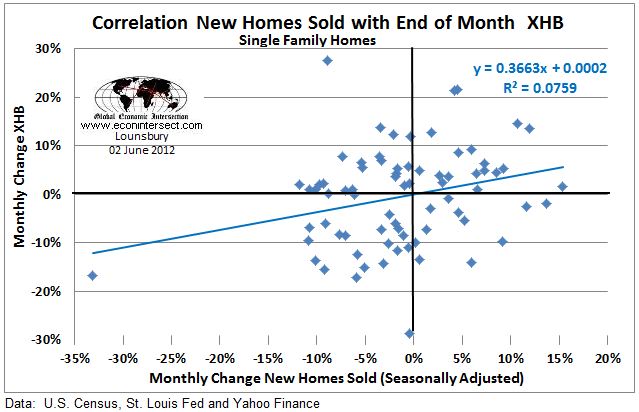 Only two encouraging facts emerge from the graph above:

It might be possible that the price of XHB for the month following each new home sales number would better reflect the expected effect. Not so. The correlation for the following month is actually (r = -0.01, or R2 = 0.0001). Therefore, in the case of the example given earlier, the April new home sales data announced May 23 will have, on average, no effect whatsoever on the price change for XHB in June.

The final question about the relationship between new home sales and XHB over more than six years involves the observation that the data is very noisy, especially the price of XHB. In such cases, moving averages may bring out relationships that are lost in the noise of fluctuation for single data points. The following table shows that the use of moving averages does give better results. 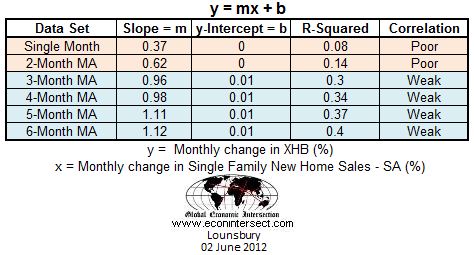 When three or more month moving averages are used:

However, the improvements above are insufficient to provide a basis for good trading signals. The reason is obvious in the final graphic below. We have selected for analysis the three-month moving averages for the data because that is the shortest smoothing span that gives the improved but weak correlation and a slope near the expected 1:1 value. 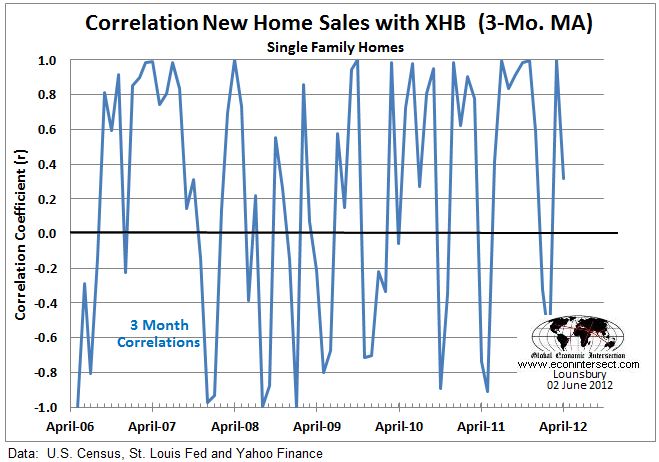 The correlation coefficient for the entire 74 months (71 months of three-month moving averages) varies frequently from near -1 to near +1 when the correlations are viewed over three month spans. So, a few months after one has seen near perfect correlation between the new housing sales and XHB, it can frequently happen that the correlation will be reversed and very negative.

Looking back one more time at the first graph, we will again note that there are clearly long-term trend relationships between the direction of change for new home sales and the price of XHB. However, trying to use the relationship for making timing decisions for buying and selling the ETF is problematic. In fact, even looking at the trend changes, XHB clearly hit bottom in February 2009, but there are three low points for new homes sales in August 2010, October 2010 and February 2011. The rise in new home sales from February 2011 is sufficiently weak to indicate that a bottom for new home sales has yet to be reached.

Don’t use new home sales for making buying and selling decisions for homebuilders. Since February 2009, XHB is up about 150 percent (including 7 percent dividends). From the time of the first bottom in new home sales in August 2010, the gain is 56 percent; from the second triple bottom two months later, up 43 percent; and from the third triple bottom four months after the second, up only 22 percent.