A Robust Pipeline of MLP IPOs

Many brokerage and financial websites incorrectly report recently listed stocks’ yields until these companies have paid a full year’s worth of dividends, a quirk that provide savvy investors with an opportunity to purchase the most promising dividend payers before the herd catches on.

Investors mulling a position in a recently listed stock should pay close attention to two key dates: the quiet period, when investment banks underwriting the IPO are barred from issuing research reports or earnings estimates on the firm; and the lock-up date, when company insiders are prohibited from selling their shares.

At the expiration of the quiet period, brokerage houses involved in the IPO often issue lengthy research reports trumpeting the fledgling stock’s growth prospects. Nothing drives trading volume and price appreciation like a slew of positive initiations from analysts at the big investment banks.

Recent IPOs sometimes come under near-term selling pressure when the lock-up date passes, as company insiders seek to monetize some of their stakes. Investors shouldn’t necessarily regard these sales as a portent of future disappointment; insiders with an outsized proportion of their wealth tied up in the company’s stock may look to raise cash and use the proceeds for other purposes.

For income-seeking investors, IPOs of master limited partnerships (MLP) can be a lucrative opportunity to buy into long-term growth stories at favorable valuations. In many cases, MLPs grow their distributions at the fastest rate during their first two years as public companies; there’s nothing like a growing distribution to drive price appreciation and total returns.

However, selectivity is the key to outperformance. Investors must have a thorough understanding of the publicly traded partnership’s business and growth prospects, especially as the universe of MLPs expands and diversifies.

All too often, investors gravitate toward the highest-yielding publicly traded partnerships without understanding the underlying risks. Many energy-related MLPs managed to maintain their distributions throughout the financial crisis and Great Recession, overcoming frozen capital markets and plummeting oil and gas prices. MLPs that own midstream assets such as pipelines proved the most resilient; these names tend to garner much of their cash flow from fees and are relatively insulated from fluctuations in commodity prices.

Much of the marketing literature associated with the roughly 30 MLP-focused funds that have launched within the past two years touts the toll-like regularity of the sector’s cash flows. (See Flood of MLP-Focused Funds.)

But the increasing popularity of MLPs among individual and institutional investors–a subject we covered at great length in The Case for MLPs: Demographics and Investor Psychology–has led to a profusion of new offerings, some of which entail additional risks that inexperienced investors may overlook.

Over the past five years, 41 MLPs have gone public to varying degrees of success. For example, IPOs from the financial sector have underperformed, largely because of their subpar distribution yields, fluctuations in cash flow and concerns that the government will crack down on a loophole that allows “carried interest” to be taxed at a lower rate. (My colleague Elliott Gue addressed the latter risk in Don’t Get Carried Away.) 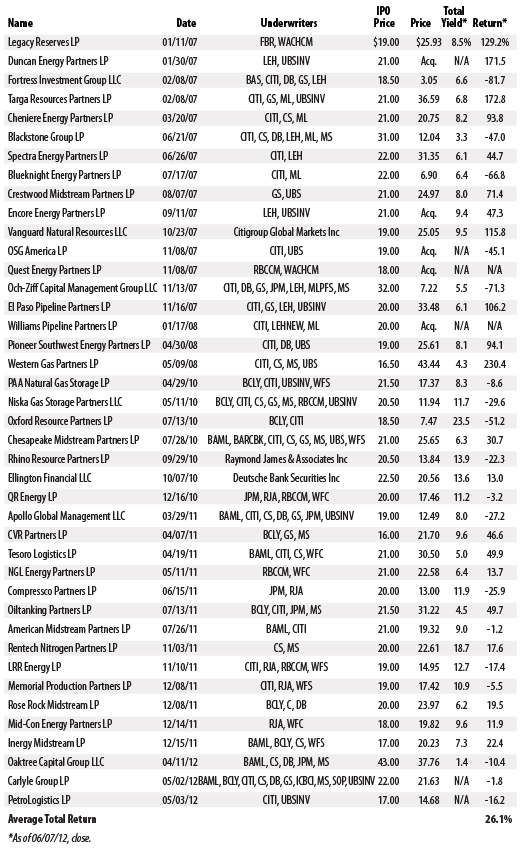 More recently, a number of unconventional MLPs have debuted on the New York Stock Exchange. In 2011 CVR Partners LP (NYSE: UAN) and Rentech Nitrogen Partners LP (NYSE: RNF) went public and, thus far, have generated solid returns for investors. Unlike most MLPs, CVR Partners and Rentech Nitrogen Partners have significant exposure to commodity prices; the MLPs’ distributable cash flow will ebb and flow with the prospects of the global fertilizer industry.

Although we’re bullish on agricultural commodities and fertilizer in the long term, seasonal price gyrations and those related to global supply and demand conditions are inevitable. Both MLPs disburse all of the distributable cash flow generated each quarter; none will be set aside to invest in the business or to meet future distributions.

For these reasons, CVR Partners and Rentech Nitrogen Partners differ dramatically from their peers. Most MLPs are set up to generate predictable, fee-based cash flows that support a steady distribution. Over time, MLPs look to buy or build new fee-generating assets that allow them to grow their payout. The group’s traditional modus operandi has been to avoid distribution cuts at all costs and gradually increase payouts over time.

CVR Partners’ S-1/A filing from April 2, 2012, acknowledges this this difference:

Investors who are looking for an investment that will pay regular and predictable quarterly distributions should not invest in our common units. We expect our business performance will be more seasonal and volatile, and our cash flows will be less stable, than the business performance and cash flows of most publicly traded partnerships. As a result, our quarterly cash distributions will be volatile and are expected to vary quarterly and annually.

This approach doesn’t necessarily make CVR Partners and Rentech Nitrogen Partners bad investments; when the supply-demand balance in the fertilizer market is bullish, these MLPs can reward unitholders with substantial distributions. However, investors should closely monitor these names for potential weakness.

Petrologistics LP (NYSE: PDH), the latest MLP to make its public debut, owns a world-scale plant that processes propane into propylene, one of the basic building blocks of innumerable plastics and synthetic materials.

The company’s most recent S-1/A filing includes the same caveat as CVR Partners. Not only can maintenance-related outages at Petrologistics’ plant lead to fluctuations in distributable cash flow, but the MLP’s distribution hinges on the propane-propylene spread. Although propane prices remain advantageous because of rising production from US shale plays and the unseasonably warm 2011-12 winter, overproduction and weak economic growth have dented propylene demand.

Investors looking to profit from newly listed MLPs will be spoiled with choices in coming months, as 11 partnerships have filed S-1 registration statements in anticipation of a potential IPO. 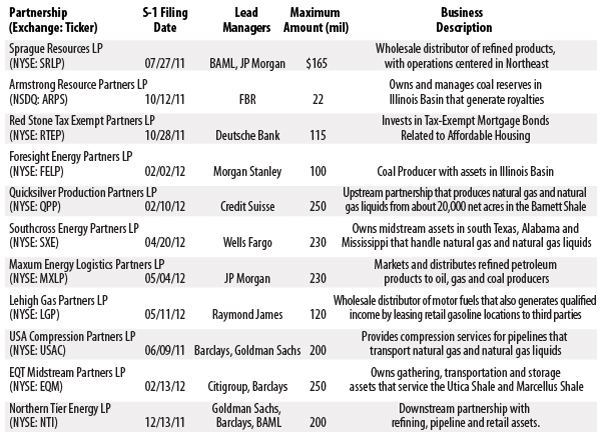 Among the ranks of the potential new offerings is Northern Tier Energy LP (NYSE: NTI), a downstream partnership that owns a refinery in Minnesota with a nameplate capacity of 74,000 barrels per day. The company also operates 166 convenience stores and 67 franchised locations. If Northern Tier Energy goes through with its IPO, the partnership will be one of the few pure refining plays in the MLP universe.

Comments from various management teams suggest that investors should expect new MLPs in traditional upstream and midstream business lines, as well as in nontraditional industries such as oil-field services and deepwater drilling. The appeal of the structure is simple: Many of these assets will earn a higher multiple as part of an MLP than within a traditional corporate structure.

Here’s a review of quarterly conference calls from the past six months that have included discussions about spinning off assets as an MLP. Note that this informal (and undoubtedly incomplete) survey doesn’t include private-equity firms that may be looking to monetize assets.

Regardless of whether these companies follow through with plans to form MLPs, the frequency with which these conversations are occurring and the breadth of energy-related firms considering the structure suggests that the pipeline of IPOs will remain robust.

Although many MLPs are designed to grow their distributions rapidly in their first few years as a public company, investors should closely evaluate the firm’s business prospects, the stability of its cash flow and the growth potential–either via drop-down transactions from its parent or opportunities for organic expansion.