No Bull: There’s More Downside Ahead

In response to softening US economic data, the US Federal Reserve announced on June 20 that it would extend its Operation Twist program until the end of 2012.

First unveiled a year ago, Operation Twist aims to reduce long-term US interest rates through the purchase of long-dated US government bonds. Specifically, as part of its first and second rounds of quantitative easing dubbed QE and QE2, the central bank’s balance sheet expanded to more than $2.87 trillion worth of bonds (see chart below). 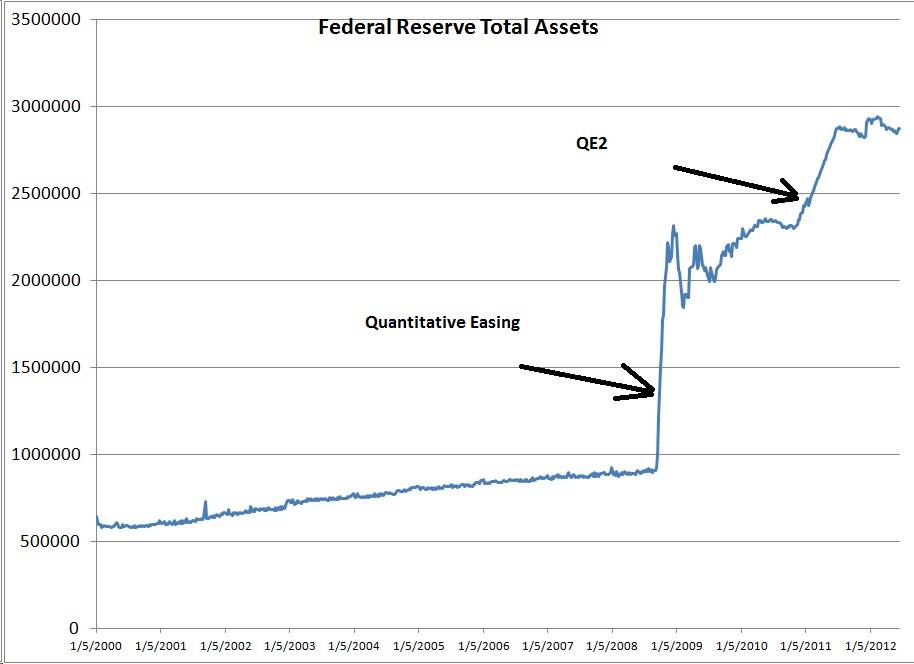 In Operation Twist, the size of the Fed’s balance sheet does not expand. Instead, the central bank sells off short-term Treasuries and buys bonds with maturities 6 to 30 years into the future. The Fed’s buying of long-dated bonds pushes down yields, which helps reduce borrowing rates on lending products such as mortgages.

…growth in employment has slowed in recent months, and the unemployment rate remains elevated. Business fixed investment has continued to advance. Household spending appears to be rising at a somewhat slower pace than earlier in the year. Despite some signs of improvement, the housing sector remains depressed.

None of this should come as a major surprise to our readers; we’ve been predicting a softening in US economic data for months. In our March 16 issue, “Yields on the Rise,” when US Treasury yields spiked and many pundits predicted that the Fed would raise rates sooner than expected, we cautioned that the US economic recovery remained fragile and investors were far too bullish on growth prospects.

Our outlook remains the same. As US economic data continues to weaken, expect the Fed to keep rates at ultra-low levels through 2014. The central bank also is likely to announce a third round of quantitative easing (QE3) later this year, perhaps totaling more than half a trillion dollars in additional bond purchases. We suspect Federal Reserve Chairman Ben Bernanke will choose the annual late-August conference in Jackson Hole, Wyoming to unveil QE3, just as he did when unveiling QE2 back in 2010.

We continue to look for more downside in stocks and other risk assets this summer. The June stock market rally in the S&P 500 was simply an oversold bounce in the context of a broader market correction that began in early April. At a minimum, we expect the S&P 500 to re-test its early June lows of around 1,266. We also expect the index to undercut those levels and retest technical support in the 1,200 to 1,225 area.

Crude oil prices have also been hit hard over the past few weeks for the same reasons stocks have corrected, namely concerns about global economic growth. However, crude is more oversold than the broader market and fundamental supply/demand balances remain tight outside of the US.

We’re looking for West Texas Intermediate crude oil to find support near last year’s lows of around $75 to $76/bbl and Brent crude oil should bottom out in the $85 to $90/bbl region. Ironically, falling oil prices this summer will stoke demand during summer driving season and boost consumers.

The market needs to overcome three fundamental headwinds before we become true believers in any rally: weaker-than-expected US economic data, continued instability in EU credit markets and the looming 2013 US fiscal cliff. Despite the S&P 500’s June rally, none of these issues have been resolved.

In fact, a widely watched survey of factory activity in and around Philadelphia plummeted in June, underscoring the near-term risks for the economy. The Philadelphia Federal Reserve Bank Manufacturing Index, released on June 21, posted its weakest reading since last August.

The Philadelphia Fed Index is based on a monthly survey of manufacturing companies in the third Federal Reserve District, which covers eastern Pennsylvania, southern New Jersey and Delaware. Levels above 0 indicate expansion in activity, while levels below 0 indicate contraction (see chart below). 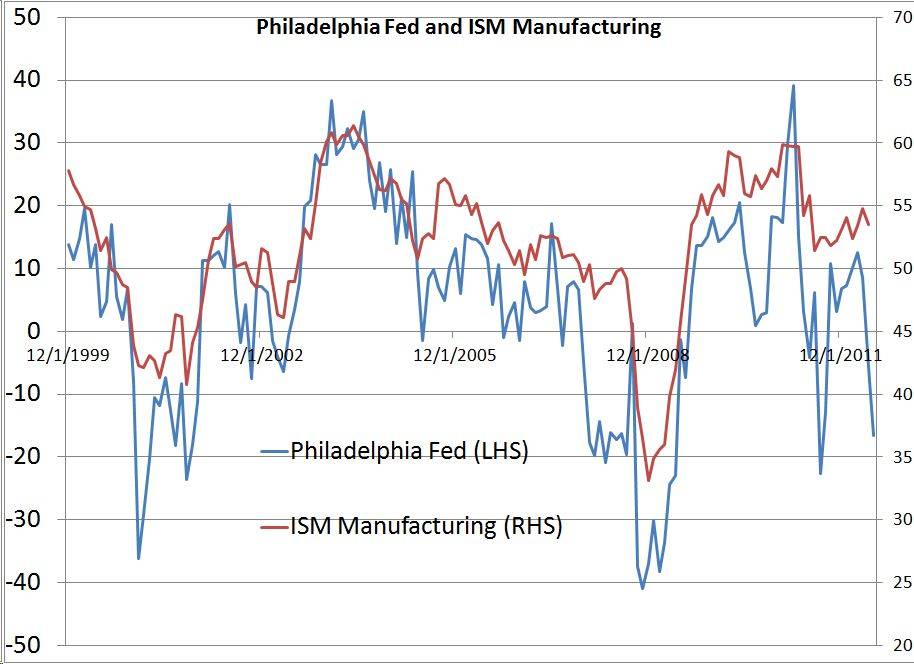 Note that when the Philadelphia Fed Index took a dive under -20 last year, the PMI data also weakened, although never below its key 50 level that divides expansion and contraction. The same trends are visible during the 2007-09 and 2001 recessions.

The June Philadelphia Fed Index came in at -16.6, down from -5.8 in May and well below expectations of 0. The consensus of economists is that the June ISM Manufacturing survey will come in at 52.8, down only slightly from the 53.5 reported in May. Given weakness in the Philly Fed data, the 52.8 consensus is far too bullish and ISM is poised to disappoint. A far weaker-than-expected ISM Manufacturing survey would serve to further stoke concerns of weakening global growth.

As with the ISM survey, the Philadelphia Fed survey includes a number of secondary indexes that offer useful information about the economy (see chart below). 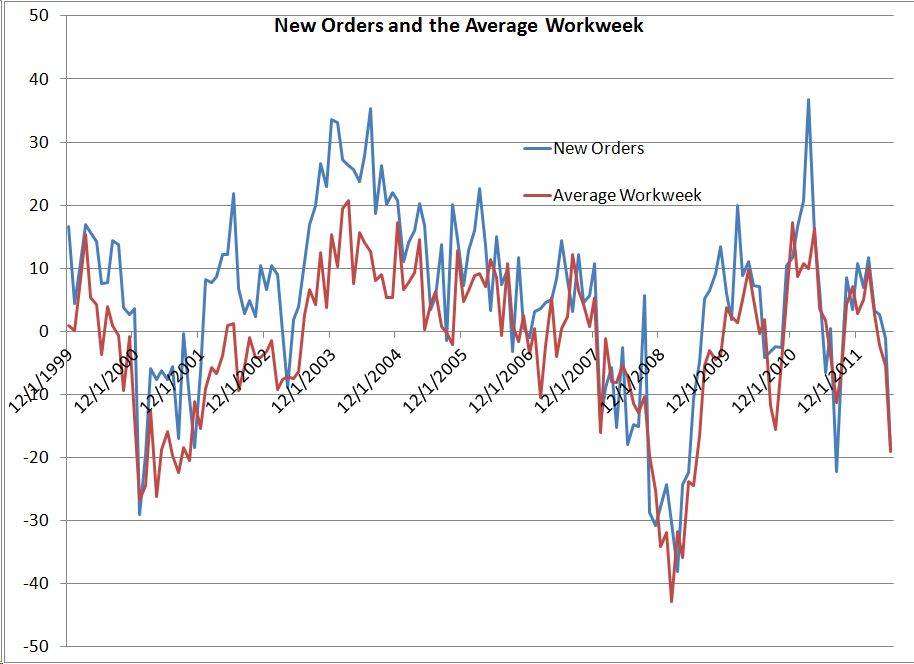 This chart shows two key surveys within the larger Philly Fed Index—New Orders and the Average Workweek—that are both considered leading indicators of economic health.

The New Orders Index is a measure of the pace of incoming new orders for manufactured products. Manufacturers typically work to fill orders and run backlogs of unfilled orders each month. As the pace of orders slows, manufacturing activity can remain robust for a month or two, as manufacturers work to continue filling backlogged orders. However, a slowdown in new orders will result in a slowdown in activity. The fact that the New Orders component is even weaker than the headline Philly Fed number at -18.8 is not a good sign for manufacturing activity later this summer.

The average workweek data reflects how hard manufacturers are working their employees. Typically, in the early stages of an economic slowdown, employers respond to weakening order trends by cutting back on employee overtime or asking their employees to skip a few shifts each week. The logic is that it’s expensive to hire and fire quality workers. If the slowdown in orders turns out to be temporary, cutting hours is an easy way to reduce costs without resorting to layoffs. If economic weakness persists, employers will likely implement much bigger cuts and actual layoffs. Changes in the length of the workweek tend to lead changes in payrolls data.

What’s worrying is that the average workweek also plummeted in the most recent Philadelphia Fed survey to below -19. The next payrolls number from the US Bureau of Labor Statistics (BLS) is due on July 7; analysts expect that the US added about 70,000 private payrolls in June. Weakness in the Philadelphia Fed average workweek index suggests that even this modest expectation could prove overly aggressive.

Private payrolls gains already have slowed from an average of over 200,000 per month from December through March, to just 85,000 on average in April and May. The Federal Reserve directly cited deteriorating labor market conditions as one rationale for its decision to continue with Operation Twist through the end of the year. The market would react negatively to a  weaker-than-expected June Employment report.

We’re not forecasting a recession for the US or global economy this year. The US economic outlook really hasn’t changed much since the first quarter of this year; the economy has been and will continue to grow at a 2 percent to 3 percent annualized pace in coming quarters. A warm winter in 2011-12 artificially boosted the data and made the recovery seem to accelerate, but that was an illusion. Similarly, the current data isn’t as bad as it seems; expectations simply became far too bullish during the wintertime mini-acceleration.

What we’re looking for over the next couple of months are signs of panic, just as we saw in the summers of 2010 and 2011. Perhaps another sudden deterioration in US economic data will prompt renewed recession fears in the US and send the market sharply lower. Alternatively, more bad headlines out of Europe could begin to weigh on global credit markets, which have remained rather placid over the past few weeks even as Spanish government bond yields jumped over 7 percent. Another debt downgrade for the US or rising fears of the 2013 fiscal cliff could also catalyze instability.

Regardless of its manifestation, investor panic would suggest that expectations have moved from way too bullish in February and March to excessively bearish. That will pave the route for a year-end rally just as it did in 2010 and 2011. We’re just not there yet.