Treasuries: A Great But Bumpy Ride

Treasury bonds have been a great investment over the past 10 years, especially since the middle of 2007. The iShares Barclays 20+ Year Treasury Bond Fund (NYSE: TLT) is an exchange-traded fund (ETF) that has racked up a gain of 130 percent since its introduction nearly 10 years ago, about 9 percent per year compounded. Over the past five years, the gain has been over 70 percent. Since July 2, 2007, TLT is up 73 percent, while the S&P 500 index is almost exactly unchanged.
However, the ride for Treasury investors has not been smooth. This has not been your grandfather’s safe old bond market. It has seen volatility that one would associate with a wildly speculative venture, as shown in the following graph:

If the chart were not labeled, one might quickly assume that this investment were nothing for widows and orphans. But it is the ETF for the 20- and 30-year Treasury bonds that are everybody’s “riskless” investment and the immediate safe haven for global investors whenever fear strikes the markets.

However, it is just because fear has been raging frequently since 2007 that the extreme volatility has occurred. And it is possible that more fearful panic attacks are yet to come.

So what is a conservative investor to do?

The extreme volatility of bonds has been greatly dampened when they are included in a portfolio that contains other investments. In this article, we take a look at a simple portfolio that was set up to be 50 percent TLT and 50 percent stocks, represented by the SPDR S&P 500 Index (NYSE: SPY) on July 31, 2002, the day that TLT was launched.

The following graphic shows the relative performance of the three investments: TLT only, SPY only and the 50:50 portfolio. 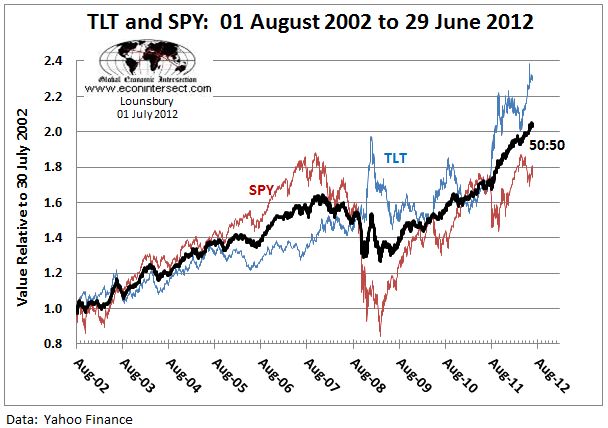 It is immediately obvious how smooth the 50:50 line is compared to either TLT (blue) or SPY (red). There are numerous times when SPY and TLT have made very strong moves in opposite directions. The correlation coefficient for the daily percentage changes of each of the EFTs over the entire 10-year time interval is -0.428, a weak inverse (negative) correlation. But that weak negative correlation is sufficient to greatly smooth the performance of the 50:50 portfolio.

A better understanding of how the weak 10-year correlation can have a major effect is conveyed by the following graph. The 6-month and 1-year correlations have changed over time, remaining essentially zero for most of the bull market from 2002 to 2007.

The correlations became much more negative in 2008, just in time to exert an important moderating effect on the 50:50 portfolio during the stock market crash. 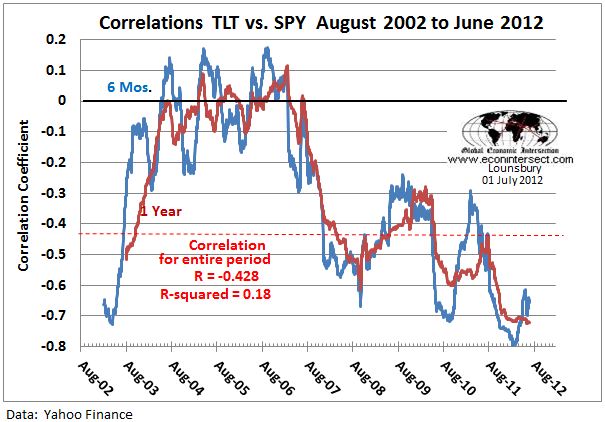 During the current bull market the average changes in TLT have been almost two-thirds those of SPY, nearly twice the magnitude seen in the 2002-07 market. The larger magnitude of the correlation relationship between TLT and SPY has added to the increased negative correlation smoothing effect for the portfolio over the last three years.

The biggest benefit of this hypothetical portfolio has been the impact of mixing the two ETFs on portfolio drawdowns:

The effect of this simple binary portfolio on reducing drawdowns is astounding. The two individual ETFs experienced 9 (SPY) and 19 (TLT) drawdowns of 5 percent or more. The 50:50 portfolio had only four.

All three of the cases saw very large drawdowns during the financial crisis but the 50:50 was the smallest—not that anyone would take comfort in “only” having a 21.5 percent drawdown.

We expect that periodic rebalancing would improve the performance and further reduce the volatility of this binary portfolio. That scenario has not been examined here, but rebalancing will be addressed in future articles. Also, not many people have portfolios with only two investments. We will provide analysis of more complicated portfolios in future articles for Investing Daily.