Diversification is Not a Panacea

The traditional way to reduce risk is to diversify. However, as we have learned in the 21st century, a well-diversified portfolio is not immune from outsized losses. The second half of 2008 saw losses in so many asset classes that it seemed there was no place to hide unless you just sold everything and waited it out in cash. Here, we look at a portfolio of three uncorrelated asset classes to see what happened.

The S&P 500 experienced a total decline in the stock market crash from October 2007 to March 2009 of almost 60 percent. The only market decline that was more severe during the past 100 years occurred at the start of the Great Depression (1929-32). The drawdown during the 2007-09 decline for the SPDR ETF for the S&P 500 (NYSE:SPY) was a monstrous 55.2 percent, cushioned slightly from the total fall for the index by dividends paid.

Standard portfolio management practices developed over the previous three decades failed to protect investors from significant losses. Two of our previous articles on Investing Daily have looked at how simple binary portfolios of SPY behaved during recent years.

Treasuries: A Great But Bumpy Ride (July 2) looked at combining SPY with a bond ETF (NYSE: TLT). This combination did cut the maximum drawdown to “only” 21.5 percent, but still left four other significant drawdowns over the 10-year period. The average loss for the five drawdowns was 14 percent. The old-fashioned idea that bonds go up when stocks go down just hasn’t worked very well in the new century.

Gold’s Persistent Allure (June 19) combined SPY with the gold ETF (NYSE: GLD). That reduced the maximum drawdown a little below 20 percent, but produced eight other significant drawdowns. The average for the nine drawdowns was 9.9 percent in the 7 ½ years studied.

We have also looked at the binary portfolio for TLT combined with GLD (not published before) and obtained similar results, which we will discuss briefly here.

These two ETFs have a correlation coefficient R = 0.04, virtually zero correlation over the 7 ½ year period since GLD was first available (November 18, 2004). The time variation of the correlation in this case is much less than for the first two ETF pairs, and stayed in the negligible area (+/-0.2) for all 7 ½ years for both 6-month and one-year correlations. The 30-day correlation reached the poor correlation range outside of +/-0.2 less than 5 percent of the time.

This is a classic case of two variables having virtually no correlation even over short time intervals. The other two pairs examined in the previous articles had a much stronger time variant behavior of correlation.

Yet the result for GLD combined with TLT is surprisingly similar to the other two pairs, as demonstrated in the following graph and the table below it. 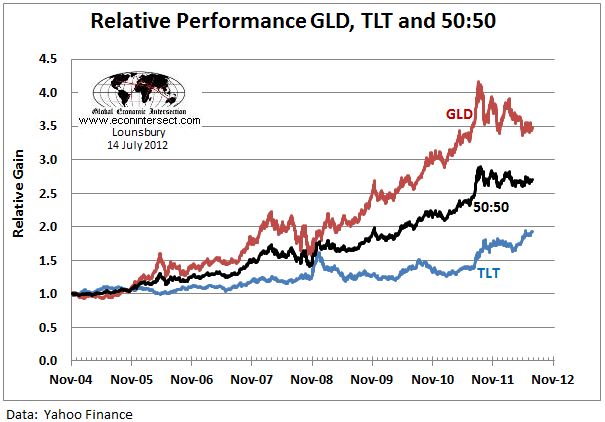 In this article, we will go one step further to look at a three-component portfolio, one-third in each of the three ETFs. The relative performance graph appears to be a little smoother for the three-ETF portfolio, compared to the three binary portfolios: 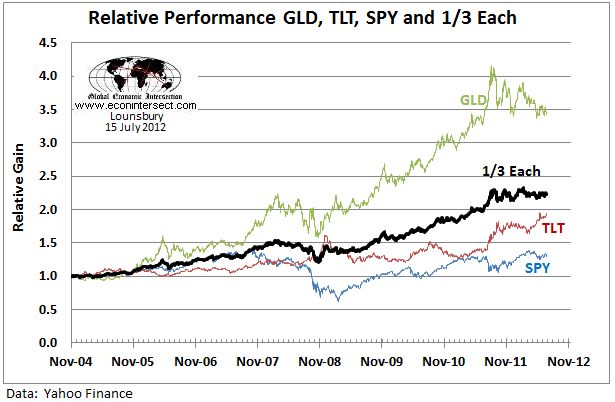 The drawdown data doesn’t bear out the first impression. The worst drawdown is nearly identical to two of the three binary pairs. The effect that might have been anticipated because of the lower 18.8 percent drawdown for the TLT/GPD pair has not materialized. 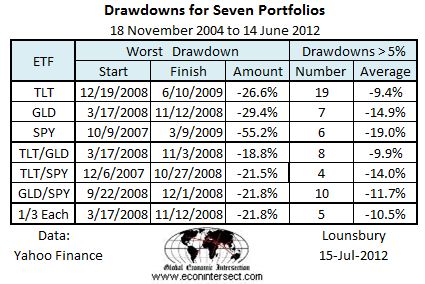 The 21st century problem that investors must cope with is the failure of mixing asset classes of nominally poor, nil or even negative correlations. This process just hasn’t been working as described by Modern Portfolio Theory. The reason for this is that correlations can vary over different time periods. In the second half of 2008, we had what many call a Black Swan event, something so improbable that it can never happen. But it did.

We now recognize that the old rules based on normal distributions and time averaged correlations just don’t work when correlations change drastically with time. The Black Swan arrives when all the presumed uncorrelated elements line up and become highly correlated. Even when the correlations don’t change significantly, near zero correlations are not all that effective in reducing drawdown losses compared to cases where correlations shift more into alignment. This is seen with the TLT/GLD pairing reviewed above.

The reason that Black Swan events were presumed virtually impossible was the result of making poor assumptions and then building a theory on them.