In contrast to its export-driven peers, Indonesia is one of the rare emerging market nations to boast a consumer-driven economy, with domestic consumption estimated to contribute roughly 55 percent toward its gross domestic product (GDP). That means the island nation, which is the fourth-largest country in the world by population, could weather a global downturn far better than other emerging economies that are far more dependent upon developed-world consumption. Even during the 2008-09 global recession, Indonesia’s gross domestic product (GDP) still managed to produce slightly more than 4 percent year-over-year growth before rebounding to a growth rate of over 6 percent.

The country’s burgeoning middle class, which its central bank estimates is just over 60 percent of its population, saw its household net income soar more than 80 percent in 2011. The booming economy has kept Indonesia’s unemployment rate at an enviable 6.3 percent , while the inflation rate has fallen from a 15-year average of 12.2 percent to just 4.5 percent as of June. And after 14 years of junk ratings, Indonesia recently enjoyed a ratings boost to investment-grade status from both Moody’s Investors Service and Fitch Ratings.

These favorable characteristics as well as a perception of relative safety have attracted significant foreign direct investment (FDI), which jumped 30.9 percent in the second quarter from a year ago to USD5.9 billion.

Beyond that, I recently spoke with David Ruff, the portfolio manager for Forward Select EM Dividend (FSLRX), who identified Indonesia as having particularly strong fundamentals. In fact, Ruff said Indonesian firms are so compelling that his portfolio has an outsize weighting of over 13 percent in Indonesian names versus a weighting below 3 percent  for his fund’s benchmark.

Ruff employs a unique methodology that uses a company’s dividend yield as a signal for divining value plays. His initial screen searches for stocks that have higher-than-average yields for their local markets. Because these stocks tend to be beaten down, he then uses fundamental analysis to determine whether a firm has a catalyst for a potential turnaround. Though he also uses this technique in his more broad-based Forward International Dividend (FFINX), Ruff says this approach works especially well in emerging markets, where a lack of information gives him an edge in identifying such plays before other investors pile into them.

Investors who examine the performance of Forward International Dividend should note that Ruff took the helm in late 2008, and that the fund now ranks in the top 3 percent of Morningstar’s foreign large-cap blend category over the trailing three-year period. Forward Select EM Dividend was launched in May of last year, so it has yet to produce sufficient data to be suggestive of future performance. Nevertheless, over the trailing 12-month period, the fund is in the top 7 percent of Morningstar’s emerging market category.

Unfortunately, the fund’s actual price gains have significantly lagged its NAV because of its long-term tendency to trade at a discount. Even so, its returns based on price alone are still extraordinary, though not quite as high as those of its actual underlying portfolio. Even better, the fund achieved these returns without the use of leverage, which is somewhat uncommon in the CEF world.

The fund’s distribution rate is only 1.6 percent (based on price), and the distribution is comprised of investment income, as well as short-term and (mostly) long-term capital gains. Fortunately, the fund is not in the habit of making destructive returns of capital.

However, it’s important to note that this fund is not for the faint of heart. Its seasoned management team (based in Singapore) runs an extremely concentrated portfolio with just 25 holdings. Although the fund’s volatility has cooled somewhat over the past three years, it’s exhibited substantially greater volatility than the broad-based international benchmark MSCI EAFE over longer-term periods.

And while the Indonesian economy may prove resilient during the next global downturn, that doesn’t mean its stock market won’t suffer losses in excess of developed-world markets. In 2008, for example, the fund dropped almost 57 percent (on a price basis) versus the EAFE’s 43.4 percent loss. That means even aggressive investors should limit their allocations to just 3 percent to 5 percent of their overall portfolios.

Finally, CEFs occupy an obscure corner of the investment world, and that means trading volumes can be rather thin. This fund’s average daily trading volume over the past three months is a little more than 36,000 shares. And it’s most recent bid/ask spread (at time of writing) is 6 cents. So investors should always use buy and sell limits when trading shares of this fund. 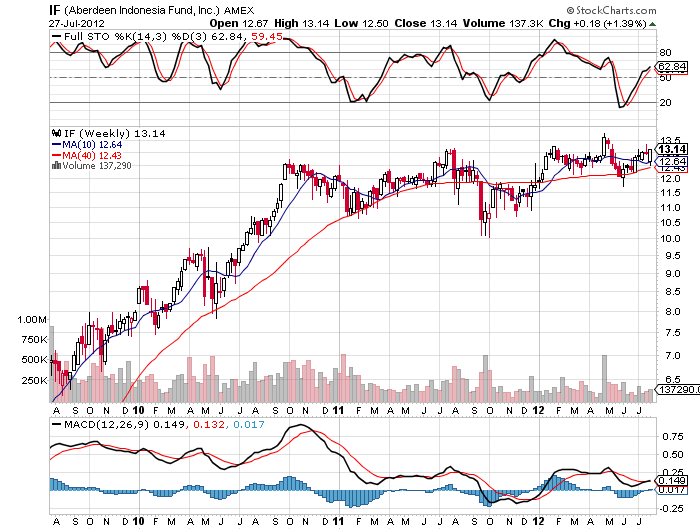