Monetizing Mobile: Facebook’s Sponsored Stories are Not the Answer

The difficulty will be in monetizing wireless technology. For the telecom companies it’s great because it’s more minutes being spent on the phone, but for the content providers it becomes harder to get people to part with their money.

Will Facebook (NasdaqGS: FB) ever stop going down?  The social networking company’s IPO came out at $38 per share back on May 18th and it has been a one-way ticket to investment losses ever since. The latest disaster for Facebook was investor disappointment with the company’s release last Thursday (July 26th) of its second-quarter financial report. Despite the fact that the company’s revenues grew 32% year-over-year to $1.18 billion — beating analyst estimates – and adjusted earnings of $0.12 per share were flat with last year but matched analyst estimates, the stock tanked 13% on the news.

We can’t blame poor forward guidance for the stock drop because Facebook refuses to provide guidance. But maybe we can blame the company’s refusal to provide guidance as a source of investor frustration. In the post-earnings conference call, the only forward projection Facebook CFO David Ebersman was willing to make regarding the second half of fiscal 2012 involved operating expenses, stating that they would rise significantly:

While we ultimately believe Facebook’s business model should support attractive operating margins, at this early stage of our growth, investment is a top priority as opposed to managing for a target margin.

Profit margins be damned – not exactly what investors want to hear. Since profits are calculated as revenues minus expenses, it would be nice to know how much second-half revenue is expected to increase as a counterweight to the expected increase in operating expenses. Unfortunately, CFO Ebersman refused to offer any revenue projections, stating:

Revenue growth is just harder to predict, and it’s particularly hard to predict when you’re really focusing on a new product that you’re in the early stages of launching, as we are with Sponsored Stories in News Feed.

Since advertising constitutes 84% of Facebook revenues, the key to Facebook’s future is advertising growth. Here’s the problem: although Facebook’s monthly average users increased 29% year-over-year to 955 million, the growth rate in mobile users grew much faster at 67% and more than half of all users (543 million) now access Facebook using mobile devices (e.g., smartphones). Banner ads don’t work on smartphones because the screen is too small. There simply isn’t enough “real estate” on a small smartphone screen to accommodate both the primary social-networking function and the money-making advertising function.

Furthermore, people using smartphones are “on the go” and interested only in communication, not shopping. Internet purchases wait until the person is at home, sitting down, and has time to compare prices among different websites, as well as a free hand to pull out her credit card.  According to CFO Ebersman, advertising revenue growth is lagging behind user growth because mobile users do not spend money on advertisements at anywhere near the same rate as desktop users do:

Ad impressions continued the recent trend of growing more slowly than users as more of our usage is on mobile devices. This trend is particularly true in markets such as the U.S., where smartphone use is expanding rapidly. The overall number of ads delivered in the U.S. this quarter decreased 2% year-over-year despite a 10% increase in daily users and despite the increase in ads per page from the product changes I mentioned earlier, as daily Web users in the U.S. declined in favor of mobile users. And we’re seeing similar trends in other developed markets.

Earlier this year, we launched Sponsored Stories in Facebook News Feed. Sponsored Stories are regular stories that people see in the News Feeds already, updates, likes, comments posted to Facebook every day that a marketer pays to highlight. For example, if I post a positive review of a product I purchased at Wal-Mart, about 20% of my friends have seen the post, depending on things like when they check their News Feed. Using Sponsored Stories, Wal-Mart can pay to boost distribution of this post so a larger percentage of my friends see it.

Facebook users spend a large percentage of their time on News Feed. Sponsored Stories enable marketers to interact with their customers where their customers are spending their time. Our early results are encouraging. As measured by click-through rates, Sponsored Stories in News Feed perform multiple times better on both desktop and mobile than ads in the right-hand column.

Sponsored Stories in News Feed are the cornerstone of our mobile monetization strategy. News Feed functions in exactly the same way whether you’re on the desktop or phone. This is important because we avoid the dilemma faced by other industry players, where to put ads on the smaller screens. With News Feed, marketing is incorporated seamlessly into the user experience on mobile devices. We recently enabled our advertisers to buy us exclusively in mobile News Feed.

Relying on the news feed for mobile advertising dollars just doesn’t cut it. CEO Zuckerberg calls it “an encouraging start” that by the end of June sponsored stories were generating $1 million per day in ad revenue, half of which was coming from mobile users. Let’s see: $1 million per day equals $365 million per year, which is only about 30% of total revenues. When you take into account that sponsored stories will probably cannibalize ad revenue from other sources, this mobile strategy is underwhelming.

During the conference call, COO Sheryl Sandberg claimed that 70% of Facebook ad campaigns resulted in a return on investment (ROI) of at least three times the cost of the advertising (i.e., “ad spend’) and 49% returned at least five times the ad spend. All fine and dandy, but this ROI data applies to all Facebook ads, not just ads on mobile devices let alone sponsored stories. In other words, the ROI on sponsored stories remains pure guesswork.

COO Sandberg admits that the advertising experience on Facebook for clients is “complicated” and that the market needs to be “educated” about the value of Facebook ads “over time.” The problem, as Sandberg puts it, is the delay between seeing a Facebook ad and purchasing based on that ad:

When you see an ad on Facebook, you don’t go and click to a purchase right there, but you’re more likely to search later on and buy a product or to walk into a store and buy a product. Facebook marketers need to learn how to make their ads really a two-way dialogue with consumers.

In other words, Facebook ads don’t work right away, but are just the beginning of a relationship with customers that needs to be nurtured with further dialogue. This doesn’t sound just complicated, but a pain in the derriere. Advertisers want to close the deal (i.e. receive cash) as soon as possible after an advertisement runs and Sandberg is basically saying that the payback period is long and arduous.

No wonder advertisers need to be educated – common sense would argue that delayed payback is a bad deal. It sounds more like advertisers need to be brainwashed as opposed to educated! As to how long this advertiser “education” will take to generate significant profit growth for Facebook, Sandberg unsatisfactorily answered that it “will depend” on many factors. Thanks for the complete vagueness, Sheryl!

The good news for Facebook is that users will not have the ability to opt-out of sponsored stories altogether, but must opt-out of having each of their discussion posts, “likes”, or “check ins” used by advertisers on an individual basis and only after at least one sponsored story has already run on the news feed using that interaction. Many users might get fed up with the constant effort of individual opt-out activity and just let sponsored stories using their interaction data go through unimpeded. Others, however, may be so concerned about privacy that they stop using Facebook altogether.

No Mobile Operating System Means Facebook is No Google or Apple

Many analysts are skeptical of Facebook’s mobile prospects. There is not getting around the fact that the mobile space is controlled by Apple’s (NasdaqGS: AAPL) iPhone iOS and Google’s  (NasdaqGS: GOOG) Android mobile operating systems and these companies can leverage these operating systems to build apps that get the upper hand against Facebook in monetizing mobile web browsing.  The obvious answer for Facebook is to develop its own smartphone and mobile operating system, but CEO Zuckerberg squashed such rumors in the conference call:

Facebook is the most used app on basically every mobile platform. We want to not just have apps that people use but also be kind of deeply integrated into the operating systems as possible. We want to support a development ecosystem, where other apps can build on top of Facebook. So that’s why you’ll see us do things like support Apple in the iOS integration that they wanted to do.

There are a lot of things that you can build in other mobile operating systems that aren’t really like building out a whole phone, which I think wouldn’t really make much sense for us to do.

If Zuckerberg thinks Apple is going to make it easy for Facebook to integrate into iOS and monetize mobile ad spending on iPhones, he’s delusional. Whoever controls the operating system gets the lion share of profits; it’s that simple and what worries owners of Facebook stock. According the research firm IDC:

The jury is in: Facebook is not and will not be a second Google.

Investors are not happy with Facebook’s decision to make sponsored stories the “cornerstone” of their mobile monetization strategy. Facebook’s stock price has declined substantially as a result of this skepticism. If mobile is the future and the migration of more Internet users to mobile is hurting Facebook, why not invest in stocks that actually benefit from mobile Internet growth: 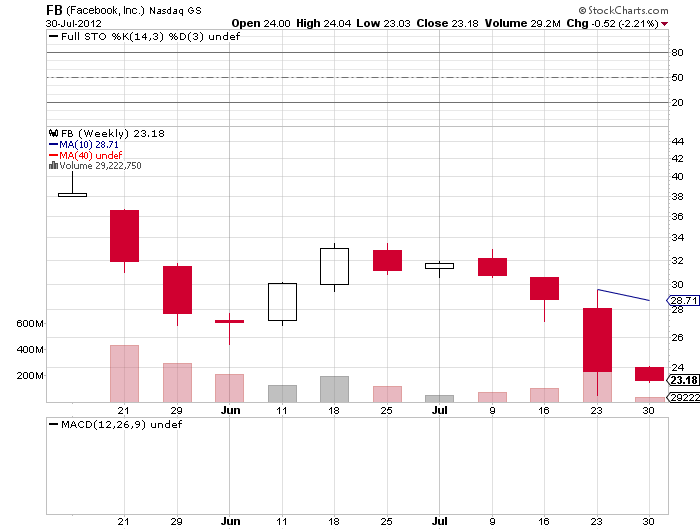