Northern Tier Energy LP (NYSE: NTI) on July 26 joined the rank of publicly traded partnerships, finishing the session at $14.16 per unit after its initial public offering (IPO) fetched a price the fell well short of the $19 to $21 per unit that the company had anticipated.

According to the most recent amended registration statement that the firm filed with the Securities and Exchange Commission (SEC), the fledgling master limited partnership (MLP) expects to distribute $2.68 per unit over the next 12 months. Based on this assumption, the stock sported an estimated yield of about 19 percent at the end of its first day of trading. The units would have yielded 13 percent, had the IPO achieved its price target.

The MLP divides its operations into two business segments: refining and retail.

Northern Tier Energy’s asset base includes the St. Paul Park Refinery, which boasts a nameplate capacity of 74,000 barrels per day, as well as a 17 percent interest in the Minnesota Pipeline, a system that delivers much of the facility’s feedstock. The firm also owns associated refined-product terminals storage tanks, railcar loading and unloading stations, and a dock on the Mississippi River.

In 2011 Northern Tier Energy sold about 80 percent of its gasoline and diesel volumes to the 166 operated and 67 franchised SuperAmerica convenient stores that comprise the MLP’s retail operations. Meanwhile, SuperMom’s Bakery, which produces baked goods and prepared foods, keeps SuperAmerica and third-party convenience stores’ shelves stocked with tasty tidbits. The MLP also has a contract to supply substantially all the fuel sold by 90 independent Marathon gas stations. Northern Tier Energy holds these retail assets, which don’t generate income that meets the qualifications for an MLP, in a subsidiary that’s subject to corporate taxes.

Prospective investors should disregard the potential for a 19 percent yield and instead focus on the sustainability of Northern Tier Energy’s quarterly distribution and the partnership’s underlying growth prospects.

Buy-and-hold retail investors have traditionally prized the above-average yields available in the MLP sector and have bid up names that generate stable cash flow and grow their quarterly distributions reliably over time.

Unlike the majority of energy-related MLPs, Northern Tier Energy won’t target a minimum quarterly distribution or seek to minimize its exposure to swings in commodity prices through an extensive hedging program. Instead, the firm will disburse all the available cash generated in a given quarter, giving investors exposure to the upside and downside of the business cycle.

At the same time, much of the firm’s near-term growth prospects hinge on a plan to expand its refinery’s access to cost-advantaged feedstock.

Northern Tier Energy on June 22 entered an exclusivity agreement with Saddle Butte Pipeline LLC that includes a proposed nonbinding shipping commitment of 50,000 barrels of oil per day on the High Prairie Pipeline, which would deliver crude from McKenzie County, N.D., to Clearbrook, Minn. The MLP would also take an equity stake in the project.

Within the retail segment, Northern Tier Energy’s growth opportunities likely will come from mergers and acquisitions.

The Sand to Go Public

Hi-Crush Partners LP (NYSE: HCLP) submitted its S-1 form on July 6, bringing the pipeline of potential publicly traded partnerships that have filed registration statements with the SEC to 15. 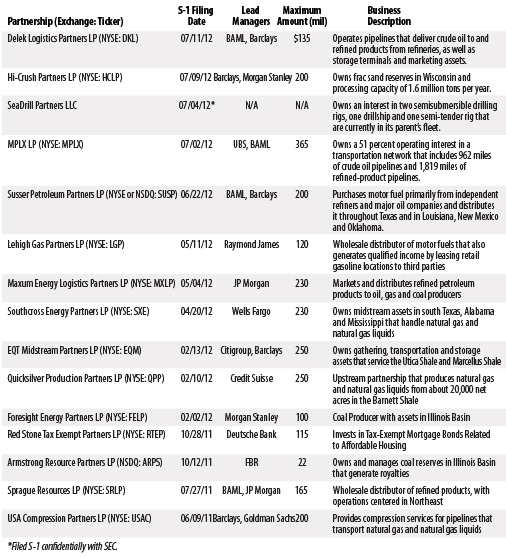 If Hi-Crush Partners were to complete its IPO, the firm would become the first MLP that supplies oil services companies with sand used in hydraulic fracturing, an innovation that’s critical to unlocking the hydrocarbons trapped in shale and other low-permeability reservoir rocks.

This controversial production technique involves pumping large quantities of water and a small percentage of chemicals into the rock formation at high pressure, producing a network of cracks through which oil and natural gas can flow. The inclusion of a proppant–typically sand or ceramic material–ensures that these passages remain open.

Despite the relative novelty of this business line to the MLP space, the partnership will exhibit many of the qualities traditionally associated with this security class.

Not only does Hi-Crush Partners’ prospectus call for the MLP to pay a yet-to-be-determined minimum distribution, but the firm also seeks to increase the predictability of its cash flow by securing take-or-pay agreements with its clients. These contracts require the customer to purchase a minimum amount of sand each month at a fixed price, guaranteeing a base level of cash flow. However, these contracts also include make-whole clauses that require Hi-Crush Partners to compensate its customers if it fails to deliver its monthly quota.

Hi-Crush Partners’ sole assets at the time of its IPO would be its 48.4 million tons of proven sand reserves and an expanded processing facility in Wyeville, Wis., that has a nameplate capacity of 1.6 million tons. About 91 percent of this productive capacity is backed by contracts through the second quarter of 2014, after which the level of coverage declines to 71 percent until the second quarter of 2016.

The MLP’s sponsor, Hi-Crush Proppants LLC, has also granted the spin-off the right of first offer on approximately 1,700 acres of additional land in western Wisconsin’ that’s prospective for fracturing sand.

A short operating history, coupled with rapidly changing dynamics in the domestic energy sector, represent the biggest uncertainties for investors considering a position in this prospective publicly traded partnership.

With earnings season in full swing, one upstream companies has indicated that they’re considering monetizing some energy-related assets to shore up their balance sheets and help fund exploration and field development. (See A Robust Pipeline of MLP IPOs for an admittedly incomplete list of names that have discussed spinning off assets as an MLP in recent months.)

Exploration and production company Whiting Petroleum Corp (NYSE: WLL) has already raised capital by creating two oil and gas royalty trusts, the latter of which my colleague Elliott Gue analyzed at length in Evaluating Whiting USA Trust II. In a conference call to discuss second-quarter results, CEO James Volker indicated that the company could spin off some mature acreage in royalty trusts and that its midstream assets would be well-suited for an MLP:

We don’t have anything to announce for that right now…but I think you need only look at the cash flow that we’ve detailed for you here about our Robinson Lake plant and apply what I would say is the traditional sort of MLP multiples to that and you’ll get an idea of the value that’s probably not fully reflected in our stock price.

We will continue to monitor second-quarter results and associated conference calls for other companies looking to monetize energy-related assets in an MLP spin-off.