Founder’s Buyout Offer for Best Buy is Full of Holes

Over the past six months, I have written on two occasions about the woes of big-box consumer electronics retailer Best Buy (NYSE: BBY). The first article detailed the company’s radical restructuring and store-closing retrenchment, while the second article (only two weeks later) recounted the dismissal of former CEO Brian Dunn because of an embarrassing sex scandal. Both articles were negative about Best Buy’s future and through last week (Aug. 3rd) the stock price had fallen significantly as expected, 28.8% and 20.9%, respectively (self-administered pat on the back).

Best Buy is in Trouble

In May, Best Buy released first-quarter earnings that reflected further business erosion with same-store sales down 5.3% and operating income down a whopping 43%. Interim CEO Mike Mikan, although not conceding defeat, admitted that the company faces serious problems:

Armed with information and choice, consumers shop differently today. The annual rate of growth of e-commerce transactions is far outstripping traditional retail sales. These changes have created risks and dislocation. We have to better adapt to the new realities of the marketplace.

Standard & Poor’s has placed Best Buy’s credit rating on “CreditWatch negative” since early April when the store-closing plan was first announced. The situation is so dire that hedge-fund manager David Einhorn dumped his entire position in the company during the second quarter, calling Best Buy “particularly irksom” and vulnerable to “additional business disruption.”

So why did Best Buy rise as much as 22% today (Aug. 6th) before falling back to a gain of “only” 13%? Founder Richard Schulze filed with the SEC a letter to Best Buy’s board of directors offering to consider acquiring the company for between $24 and $26 per share. This would amount to a purchase premium of between 36% and 47% based on last week’s $17.64 closing price. Best Buy issued an unenthusiastic press release acknowledging the offer, saying it would consider it, but calling it “highly conditional.”

The 71-year-old Schulze not only founded Best Buy in 1966, but served as CEO for 36 years until 2002 and was Chairman of the Board until June of this year. He was forced to resign as Chairman after a company investigation of the Brian Dunn sex scandal concluded in May that Schulze had acted inappropriately by: (1) failing to notify the board of Dunn’s alleged sexual misconduct when he first learned of the allegation in December 2011; and (2) informing Dunn about the allegation without shielding the name of the female accuser, thus exposing her to potential retaliation. Sounds like Schulze is a corporate version of former Penn State football coach Joe Paterno!

Schulze was supposed to resign as Chairman on June 21st at the company’s annual meeting, but announced on June 7th that he was not only resigning the Chairmanship two weeks early, but was also resigning from the board of directors altogether even though the original plan was for him to stay on the board for another year (until June 2013). Schulze’s reason for resigning early was a desire to “explore all available options for my ownership stake.” His ownership stake is substantial at 70 million shares, which is worth about $1.2 billion or 20.1% of shares outstanding. At the time, nobody knew whether Schulze was thinking of selling his stake or using it to make a bid for the company.

Schulze’s indication of interest is not a formal buyout offer, but requires many contingencies to occur first, and this explains why the stock closed on Monday (Aug. 6th) at only $19.99, nowhere near the proposed $24-$26 buyout range. Schulze is willing to contribute his $1.2 billion equity stake as part of the buyout, but that still requires billions of dollars more from private equity firms and debt lenders, none of whom have committed yet.

Although Schulze says in the letter that he has had conversations with private equity firms and former Best Buy executives (including former CEO Brad Anderson) about a buyout offer, he has “not reached any agreements with any of the private equity firms or former executives.” Regarding debt financing, all Schulze says is that Credit Suisse (NYSE: CS), his financial advisor, “is highly confident that it can arrange the necessary debt financing.” Lastly, Schulze emphasizes that he “shall not be subject to any binding obligation with respect to any transaction unless and until a definitive agreement is executed and delivered.”

Can a buyout offer get any less certain? To be fair to Schulze, under Minnesota’s anti-takeover statute he is prohibited from forming a buyout consortium without the permission of the target company’s board of directors. Talk about anti-free market! So far, Best Buy’s board has refused “for several weeks” to provide Schulze with the corporate financial “due diligence” information he has requested to finalize his valuation of the company and ensure there are no hidden skeletons in the closet. Schulze’s decision to go public with a letter is aimed at prompting the board into taking immediate action on his due-diligence request.

Best Buy Shareholders Should Hope for a Takeover

Based on the money-losing and miserable competitive position Best Buy finds itself in, I sincerely hope the board takes Schulze’s offer seriously, assuming Schulze’s interest is sincere. Investors must take into account the fact that tentative offers like Schulze’s often fail to materialize, as seen in Carl Icahn’s failed bid for Clorox (NYSE: CLX) and Coty’s failed bid for Avon Products (NYSE: AVP).

Going private would allow new management to make the drastic changes needed to save Best Buy without the interference of impatient public shareholders. By failing to accept Schulze’s offer (after perhaps negotiating a higher takeout price), Best Buy’s current board would risk being stigmatized as the next Jerry Yang – the Yahoo! (NasdaqGS: YHOO) founder who rejected Microsoft’s (NasdaqGS: MSFT) $33 per share offer in May 2008  only to see Yahoo!’s stock price subsequently plunge below $10.

Schulze’s buyout offer may not be the only one on the table. Rumors are swirling that Amazon.com (NasdaqGS: AMZN) may throw its hat into the ring and make a bid. Given all of this takeover speculation, shorting Best Buy may not be a good idea right now. Just ask hedge fund JANA Partners, which said a couple of weeks ago that “a big box retailer whose category is being entered by Amazon” (i.e., Best Buy) was its favorite short idea. Ouch! 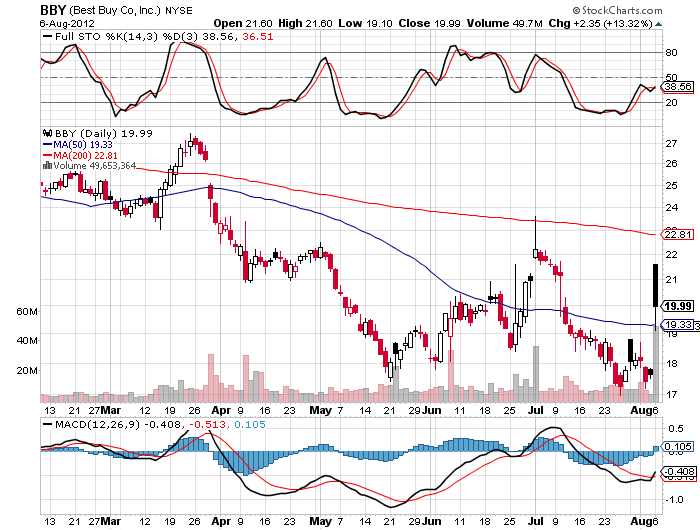