Priceline.com Lets You “Name Your Own Price” on the Stock $117 Lower

As a Star Trek fan and long-time admirer of actor William Shatner, part of me is smirking at Priceline.com’s (NasdaqGS: PCLN) $117.48 price decline (-17.3%) on Wednesday (Aug. 8th). Investors have given a very big “thumbs down” in reaction to the company’s second-quarter financial report, which beat analyst estimates for earnings per share but missed revenue estimates. Even worse, both earnings and revenue guidance for the third quarter is much lower than analysts were projecting:

Third-quarter EPS growth is projected at 17% (at the midpoint), less than half the 43% year-over-year growth in the second quarter, and Q3 revenue growth is projected to run only in the 9% to 15% range, which is a substantial slowdown from Q2’s 20.3%.

Guidance reflects an assumption that economic conditions in Europe will further deteriorate. The Company believes that concerns related to sovereign debt and the viability of the Euro have negatively impacted historical operating results and are likely to impact future results. Given the uncertainty surrounding worldwide economic conditions, particularly in Europe where much of the Company’s business is concentrated, the Company believes the variability around its guidance is greater than is usually the case.

Priceline.com’s Move Towards Hotels Means Moving Away From “Name Your Own Price”

I’m calling the stock’s 17.3% plunge “The Curse of Captain James T. Kirk.” Shatner was unceremoniously fired earlier this year after having been the brand image of Priceline for 14 years. Shatner’s “The Negotiator” character played up the fact that customers no longer had to “take or leave” a travel company’s quoted price for an airline ticket, hotel room, or car rental. Instead, using Priceline’s bidding system, customers could “name their own price” and see whether any of Priceline’s travel partners would accept their low-ball bid. Half-price bids were routinely achievable, but the customer had to bid without knowing exactly which hotel they were dealing with (only whether it was a 3-star or 4-star hotel), or what time of day they would be flying.

Personally, I always found this secrecy and uncertainty maddening and didn’t use the bidding service as a result. But many cheapskates didn’t mind the uncertainty if they could save half price or more. No doubt about it, Priceline’s stock has been an extraordinary performer over the past decade, outperforming the S&P 500 by 5,280 percentage points!

Priceline’s growth has greatly benefitted from many acquisitions:

So why, given this success, did Priceline decide to fire Shatner in a Super Bowl commercial where he dies in a bus-explosion fireball? The reason is that Priceline is steering away from “Name Your Own Price” in order adopt a fixed-price “Express Deals” concept similar to the daily deals offered by Groupon (NasdaqGS: GRPN). The “Name Your Own Price” gimmick works best with airline flights, but airlines have reduced spare capacity to the lowest level in a decade, so they no longer need to offer half-price deals to fill up the fewer planes currently in the air. Whereas customers consider airplanes to be commodities, they are much more particular about hotels and are less willing to bid on an unnamed property in an unknown location. Consequently, with Priceline’s acquisition-led growth concentrating on the hotel business, the company no longer benefits from the old bidding model.

Firing William Shatner Was a Mistake

While the shift to hotels makes its phase-out of Shatner’s “Negotiator” character somewhat understandable, there has been a heavy public relations cost. As one commentator put it back in January when the bus-explosion fireball commercial aired:

This is a huge mistake. They’ve invested millions in developing this brand, and now they are “moving in a new direction.” How many times have companies come to this decision and destroyed their brand recognition with their target audience? Even when Geico created that stupid caveman character, they still stuck with that little green Gekko because their audience knew, and liked him.

People loved the William Shatner character, and they automatically associated him with Priceline’s brand and vice-versa. I have no doubt that their market share value will significantly decline over time.

The fact that most of Priceline’s growth has occurred through its Europe-based acquisitions hasn’t helped either – 60% of its hotel revenues now come from recessionary Europe, which is not the place you want to be right now.

Providing evidence that Priceline’s problems are company-specific and not indicative of a global travel slowdown is the fact that U.S.-based online travel competitor Expedia (NasdaqGS: EXPE) gapped up 20% after reporting better-than-expected second-quarter results and announcing an increase in its dividend.

My takeaway: Even after today’s price decline, the stock is richly valued at 26 times trailing earnings, which cannot be supported by Priceline’s newly-lowered growth rates and suggest an even lower stock price in the weeks ahead. If you want to live long and prosper, don’t mess with Captain Kirk. 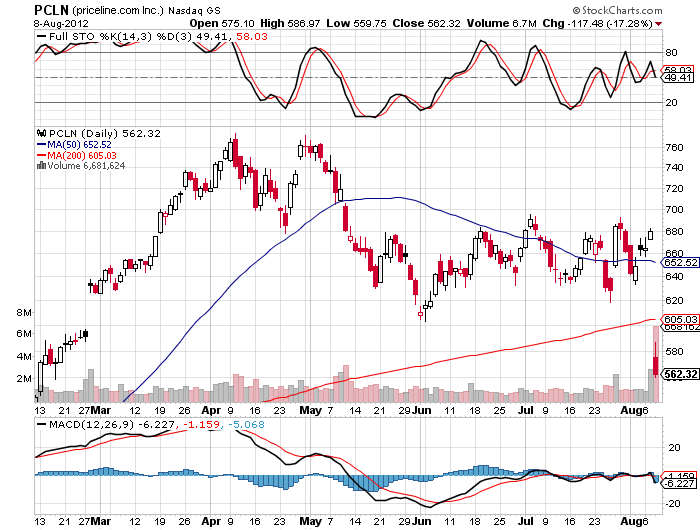