How to Play the Summer Divergence

For the first 30 months after the secular bear market low of March 2009, small capitalization stocks consistently led the way. In most of the year that followed, from August of 2011, the highs and lows of the three market indices, S&P 500, Nasdaq 100 and Russell 2000 have continued to move up and down pretty much in lockstep, but with the S&P 500 assuming the leadership role.

This lockstep behavior appears to have changed since the end of June. Since the high for Russell 2000 on July 3, both the S&P 500 and the Nasdaq 100 large cap indexes have continued to advance, but the small cap Russell 2000 index has traded down.

The divergence since the high for the Russell 2000 at the beginning of July (and especially since July 12) for the three major indices, represented by SPDR Exchange-Traded Fund (ETF) for the S&P 500 (NYSE: SPY), Powershares ETF for the Nasdaq 100 (NASDAQ: QQQ) and iShares ETF for the Russell 2000 (NYSE: IWM) is illustrated in the first graph below.

The three did trade down by similar amounts until July 12, but since then SPY and QQQ have been much stronger, trading up between 5 percent and 6 percent, while IWM is up only about one-fourth as much and is still trading below its July 3 closing high. 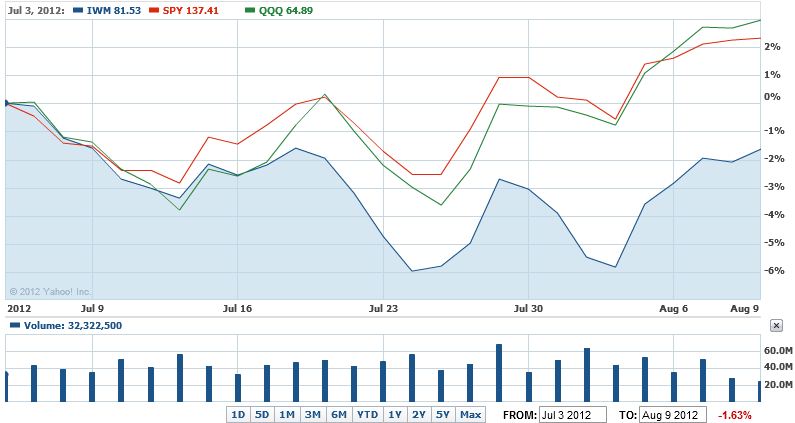 The closest thing to the current behavior during the past 3 years occurred for about four weeks late August into September last year, when IWM traded down, QQQ traded sideways and SPY traded up.

The current situation is different: In the last four weeks, both SPY and QQQ have traded up while IWM has declined.

To gain an appreciation for what is significant about the current behavior, let’s look at a longer-term view of the three ETFs all the way back to March 9, 2009: 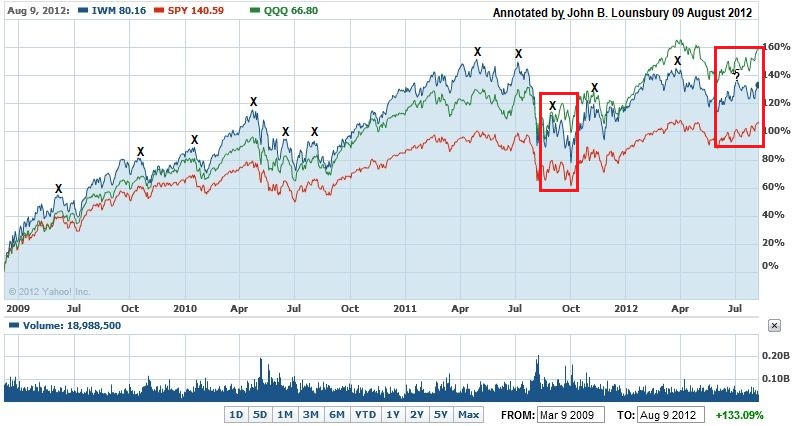 The 11 peaks in IWM that preceded declines of approximately 15 percent or more are marked with an “X”. The two periods where a significant divergence occurred for IWM with either or both of the other two ETFs are outlined with red boxes. The most recent event has the IWM peak marked with a question mark because that decline either (1) is not yet completed or (2) will prove to be only 6 percent. IMW need only rise above 81.53 (less than 1.37 above the Thursday, August, 9 close) to exceed the closing high on July 3 and remove the question mark.

However, whether the high for IWM on July 3 becomes a top defining the start of a 15 percent or more decline or not, the more important question is whether the large cap indices continue to pull away from the Russell 2000. The longer this continues, the more investors should be reducing exposure to small caps.

The other factor is the observation that small caps often lead bull markets until they mature, but then underperform as the large caps top out. The longer this underperformance for IWM lasts, the more likely that the end of the great bull market from 2009 is near, or at least that a significant correction (20 percent or more) is imminent.

Our recommended investment plan for the coming weeks: