Special Situation Stocks: Betting on a Turnaround in RadioShack Lacks a Catalyst

Sometimes even the so-called “smart money” can make bets that are more akin to gambling than investing. At least, that’s what appears to be the case with one top-performing mutual fund’s recent investment in shares of beaten-down consumer electronics chain RadioShack (NYSE: RSH).

I had been researching the most recent portfolio additions to the best mutual funds with trailing 12-month yields greater than 3 percent. There was really only one fund that truly fulfilled my stringent criteria, which required market-beating returns over both the short- and long-term, while incurring less volatility: Columbia Dividend Opportunity (INUTX).

The large-cap value fund has a 3.2 percent yield and managed to beat the broad market by 1 percentage point to 2 percentage points annually over the three-year, five-year, and 10-year trailing time periods with less risk than the market. Unfortunately, the fund has a 5.75 percent front-end load, which is a substantial performance hurdle for shareholders, and likely makes it only a compelling investment if you have access to it in an account where the load is waived.

Nevertheless, we can still mine its portfolio for stock-picking ideas. The fund last reported the full composition of its portfolio at the end of May. Among the new additions to the portfolio were the following stocks: Eaton (NYSE: ETN), Analog Devices (NasdaqGS: ADI), Apple (NasdaqGS: AAPL), Hillshire Brands (NYSE: HSH) and, of course, RadioShack.

RadioShack caught my attention because its shares have been absolutely crushed due to an antiquated business model that has resulted in declining earnings that have since turned into losses over the past two quarters. Could the fund’s management team have identified a catalyst for a turnaround that has somehow eluded the rest of Wall Street?

Over the past several years, RadioShack has attempted to shift its business model from a small-box purveyor of general consumer electronics toward a model that focuses on smartphone sales.

Sales of prepaid and postpaid mobile phones and other similar devices at RadioShack’s more than 7,300 retail locations accounted for 51.4 percent of revenue in 2011, an increase of 19 percent from the prior year. Its mix of retail locations includes over 4,700 company-operated stores, nearly 1,500 mobile phone kiosks in big-box retailers such as Target (NYSE: TGT), and another 1,100 dealer outlets.

However, both the consumer electronics and mobile device retail spaces are extraordinarily competitive, and include big-box retailer Best Buy (NYSE: BBY) and the online low-cost leader Amazon.com (NasdaqGS: AMZN). As the smartphone market matures, RadioShack’s margins are compressing at an alarming rate, down 810 basis points in the second quarter from a year ago.

Although the company still has ample cash on its balance sheet ($517.7 million at the end of the most recent quarter), it has $375 million in convertible bonds maturing in a little less than a year.

RadioShack’s financial straits also forced management to suspend its $0.125 quarterly dividend, which at the close of the trading day prior to its earnings report yielded an eye-popping 13.7 percent, a sure sign of a troubled company.

Beyond that, RadioShack has a staggering amount of short interest. The percentage of shares held short comprised 46.5 percent of the company’s float at the end of July, which is equivalent to 9.4 days of trading volume in the stock.

An Investment Thesis for Buying RadioShack is Elusive

So why did Columbia Dividend Opportunity’s seasoned management team initiate a position earlier this year? The fund has invested in deep-value special situations in the past, although in RadioShack’s case, it doesn’t appear that the present management team’s business model offers a credible catalyst for a turnaround.

The fund’s management did bump its allocation to the consumer discretionary sector a full percentage point during the first five months of the year, and RadioShack was part of that shift. The fund acquired almost 3.8 million shares of RadioShack stock, which accounts for roughly 3.8 percent of the company’s shares outstanding. Among its peers in the mutual fund industry, that makes Columbia Dividend Opportunity the largest single shareholder. Fortunately, the fund’s portfolio is diversified across 129 equity holdings, so its position in RadioShack accounts for just 0.44 percent of its portfolio.

Additionally, the same management team also runs Columbia Strategic Investor (CSVAX) and purchased a substantial stake in RadioShack shares for that fund as well. The fund bought 767,000 shares, which is roughly 0.8 percent of RadioShack’s shares outstanding, and accounts for 0.47 percent of the fund’s assets. Together, both funds hold roughly 4.6 percent of RadioShack’s shares outstanding. Although we don’t know the average price at which the shares were acquired, management’s value orientation means they likely picked up shares during the market’s swoon in late spring when RadioShack shares fell as low as $4.53.

Perhaps management felt that RadioShack’s shares had already been discounted so severely, that all it would take is modest improvement in the company’s operating performance for the shares to stop falling. But now the shares are trading around $3, which likely leaves the fund significantly underwater on its bet.

Hoping for a Takeover

Short of an unexpected improvement in operations, RadioShack shareholders may be holding out hope that either Best Buy or a private equity firm may swoop in and acquire the company. Rumors of such a possibility have abounded for years. At present, however, Best Buy founder Richard Schulze is attempting to take his company private through a leveraged buyout. That may not leave Best Buy with the bandwidth to pursue an acquisition of RadioShack. Though private equity may be attracted by RadioShack’s cash position, relatively low level of long-term debt, and its distressed status, that’s been the case for a while now.

It’s possible corporate insiders may be aware that such a deal could be in the offing. Just two days after earnings, six members of RadioShack’s board purchased almost 495,000 shares in the company for prices ranging between $2.50 and $2.63 per share. But company insiders occasionally make such purchases as more of a public relations move than actual long-term conviction in their firm.

Still, the money these insiders spent to acquire their shares is hardly insubstantial. Or maybe like Columbia Dividend Opportunity’s management, they’ve been lured into the ultimate value trap. 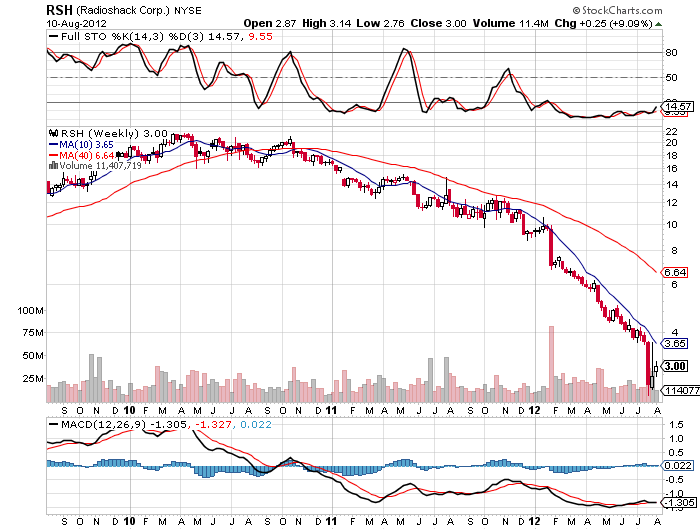