Last week I wrote about 3 Stock Plungers and only liked the future prospects of one of the stocks: Idenix Pharmaceuticals (NasdaqGM: IDIX). My main reason for thinking a sustainable stock rebound is possible was because it’s a top-ten holding of value-investing legend Seth Klarman, who owns a 9.2% stake in the company (10 million shares) at an average purchase price of $8 per share (30% higher than the stock’s current price of $6.15). Klarman’s Baupost Group has bought shares in Idenix for five consecutive quarters.

This begged the question why Klarman is so enamored with Idenix. I couldn’t get an interview with Klarman to ask him and Baupost Group’s 2011 shareholder letter (dated Jan. 31, 2012) doesn’t mention Idenix — even though Klarman started buying the stock in Q2 2011. Consequently, I needed to research Idenix myself.

I discovered that the Idenix investment story is all about the market opportunity for treating Hepatitis C, a virus that infects the liver and is life-threatening – slowly destroying the liver over 20-30 years (resulting in cirrhosis or cancer). For those that are unsure, the liver is a vital organ that we cannot live without.

There is no vaccine for Hepatitis C, so the number of people who will get infected (e.g., sexual intercourse, tattoos, blood transfusions/dialysis, sharing dirty needles, mother/child) is predictable and not likely to go down. Furthermore, the body does not develop immunity from experiencing the disease, so people can get infected multiple times. In other words, the market demand for Hepatitis C drug cures is high and long-lasting. Below are some facts about Hepatitis C:

Prior to 2011, the standard treatment for Hepatitis C was a combination of immune-boosting peginterferon injections – offered by Merck (NYSE: MRK) and Roche Holding AG (OTC Markets: RHHBY) — and ribavirin anti-viral pills (ribavirin patent has expired, so generic versions are available from several companies). Course of treatment was long at 48 weeks and costs $15,000 to $30,000, the cure rate was only 46% and there were severe side effects (e.g., flu-like symptoms, anemia, depression).

Then, in May 2011, the Food & Drug Administration (FDA) approved two new Hepatitis C drugs called “protease inhibitors” that promise much higher cure rates (75%) and shorter treatment protocols (half as long at 24 weeks). Both of these drugs are taken orally in pill form but only work in conjunction with the standard peginterferon injections and ribavirin treatment. The two new drugs are:

Based on the higher cure rate and simpler dosing from Incivek, it should come as no surprise that Incivek is outselling Victrelis 3-to-1.

But Vertex’s dominance with Incivek could be short-lived because other drug companies are working on new Hepatitis C drugs called “nucleotides” that offer the holy grail of therapy: pill-only treatment that does not require the peginterferon/ribavirin injection albatross.

Perhaps in the forefront of all-oral Hepatitis C treatment is Gilead Sciences (NasdaqGS: GILD), which in November 2011 acquired biotech company Pharmhasset in a monstrous $10.8 billion all-cash deal. Pharmhasset’s Hepatitis C drug in Phase III trials is called PSI-7977 and could be on the market by 2014. According to Gilead, PSI-7977 is “way ahead of everybody else” and promises a cure in only 8-to-12 weeks of treatment. However, news in February that patients experience a relapse of Hepatitis C symptoms after stopping treatment with PSI-7977 caused Gilead’s stock price to suffer its largest one-day drop in 11 years. Since February, Gilead has recovered to all-time highs, which suggests investors have concluded that PSI-7977 will remain the core treatment for Hepatitis C – perhaps in combination with other drugs — despite the relapse issue.

Gilead’s drug may be best, but it won’t be the first all-oral treatment on the market because Roche Holdings is expected to offer an all-oral drug cocktail possibly consisting of setrobuvir (obtained in its acquisition of Anadys Pharmaceuticals in October 2011), danoprevir (purchased from InterMune (NasdaqGS: ITMN) in October 2010), and Merck’s Victrelis.

With Bristol-Myers Squibb’s (NYSE: BMY) abandonment of the Hepatitis C drug (BMS-986094) acquired from Inhibitex for $2.5 billion and the FDA clinical hold on Idenix’s Hepatitis C drug (IDX-19368) pending additional safety data, the path to riches in Hepatitis C treatment is proving to be a tortuous one. Other drug companies in the race for Hepatitis C drug treatments or vaccines include:

Achillion is a Prime Takeover Candidate

Of all of these companies, the best speculative buy right now may be Achillion. It is a pure-play on Hepatitis C with two promising drugs under development (one protease inhibitor and one NS5). There are no FDA clinical holds on Achillion’s drug pipeline like there are on Idenix and Achillion’s small market cap of $481 million makes the company an easily digestible acquisition for big boys like Gilead, Roche, Merck, or Abbott.

Furthermore, I have a soft spot for Achillion because it is located in New Haven, Connecticut (where I lived for four years) and is in partnership with my alma mater, Yale University. Good things happen to people and companies associated with a top-notch educational institution like Yale. 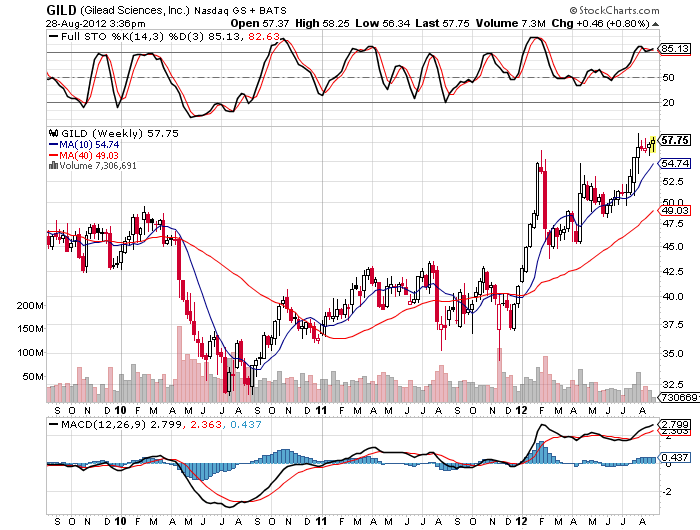 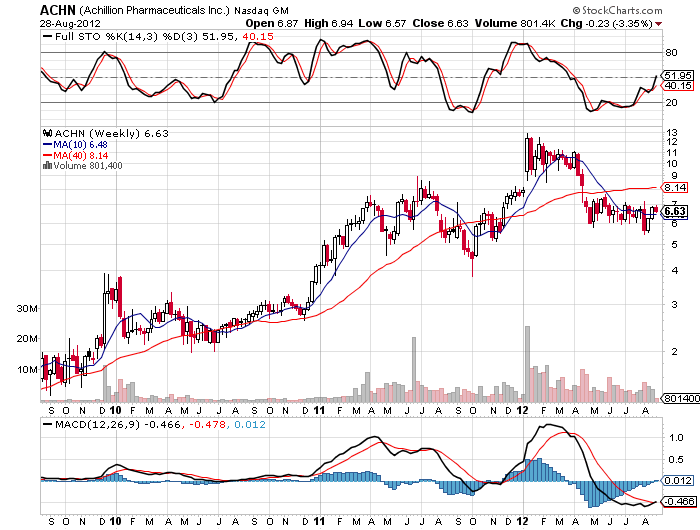