QE3: Not a Panacea for Home Builder Stocks

The announcement of a third round of quantitative easing (QE3) and the massive Federal Reserve commitment to buy RMBS Residential Mortgage backed securities for the indefinite future buoyed stock markets. Few sectors were pushed up more than the SPDR Homebuilders ETF (NYSE: XHB).

While the S&P 500 saw a gain from lows on Thursday, September 13, to highs on Friday of 2.65 percent, XHB soared by more than 6.5 percent. Expectations seemed to have been ignited for a new housing boom.

As passions cooled, XHB came back to earth and the market in general cooled down.  The S&P 500 index closed on Tuesday, September 18, up 1.59 percent from the close the previous Wednesday and XHB was up 1.41 percent.

This all happened for good reason.

Why QE3 Won’t Matter Much

The QE3 program announced by the Fed last week promises to buy $40 billion of RMBS a month for the indefinite future. An undisclosed fraction of this is expected to be new securities consisting of newly issued mortgages, with the idea that the housing market can be advanced further into recovery.

This idea has a fatal flaw.

The banks have been unable to process nearly half of the mortgage mods they should have under the Housing Affordable Modification Program (HAMP), according to a study by a top research team comprised of the Federal Reserve Bank of Chicago, the US Office of the Comptroller of the Currency (OCC), and four professors from leading universities.

More than 40,000 mortgages per month would be needed if one-fourth of QE3 went to new mortgages with an average loan value of $250,000.

However, aside from the logistics barriers discussed, several other factors inhibit home sales, as I explain below.

A big headwind comes from the 10.8 million homeowners currently underwater on their mortgages. Some of these would ordinarily be in the market to sell and buy another home, but can’t afford to sell their current home.

An additional 2.3 million homeowners have within 5 percent of the balance remaining on their mortgage. Because seller costs can range between 5 percent and 6 percent, many of these are similarly inhibited from selling to buy another home. That puts about 13 million homeowners in the equity trap that will make selling and buying a new home difficult.

A 2009 study by Paul Emrath at HousingEconomics.com found that the average time homebuyers remain in a home is around 15 years. The potential per year for reduced home sales from this source is therefore 867,000. If we arbitrarily assign a 0.7 factor to the potential total, we come up with an estimate of 600,000 a year not buying a home because they are under water on their current mortgage.

Note: The adjustment factor assumes that 30 percent of those underwater will find a way to sell and move without destroying their credit and/or down payment needed to buy another home, perhaps too high an expectation.

There have been 4.4 million completed foreclosures (bank repossessions) from 2007 through the end of 2011 (Statistic Brain*). Virtually all of these former homeowners are not eligible to buy another home because of credit impairment.

If we use the same 15-year normalizing factor as above, that indicates another 300,000 who otherwise would have been buying a home each year.  As time moves forward, early foreclosures will disappear from the credit record and those foreclosed in 2007 and 2008 will become eligible to get another mortgage, provided their credit is otherwise good.

As soon as the million or so foreclosure completion rate of the last three years starts to decline significantly, the 300,000 number will start to decline. That is not likely to change for at least a couple more years.

According to a research paper from the Federal Reserve Bank of Cleveland, the average net new household formation rate from 1997 to 2007 was around 1.5 million. For 2008-2011, the average was approximately 500,000. The accumulated deficit in new households is now about 2.5 million and is expected to continue to grow this year with an expected 1 million new households formed in 2012.

It is reasonable to assume that this represents a future demand overhang that will come into play when there has been sufficient economic recovery. This is not likely until employment recovers to more normal levels.

In the meantime, it’s reasonable to assume an estimated shortfall of 500,000 per year, at least for 2012 and 2013. The same Cleveland Fed paper gives an average home ownership rate for those under 35 at about 40 percent, so we can add 200,000 a year home buyer shortfall per year from this source, assuming that the under 35 age group dominates the population contributing to the new household formation shortfall.

The number of unemployed today has been estimated by many sources to be 23 million, below what would be the case if we had more normal unemployment levels and past employment population ratios. Many of these 23 million will already be counted in the groups we have enumerated above.

To be conservative, let’s subtract the total of all those counted previously from the total number of people without work; that leaves another 3 million people. For a 60 percent home ownership rate and an average of 2.3 persons per household, we calculate another 800,000 fewer able to buy a house that would be otherwise.

I estimate the factors above result in a reduced demand for housing purchase between 1.1 million a year (without the unemployment impact included) and 1.9 million including the effects of high unemployment.

If these numbers are added to the current sales rate of about 4.5 million houses per year, the result is 5.6 million (or 6.4 million). That would certainly put home sales at a very healthy volume, and the higher number might even be considered “bubbly.”

The current level of home sales is easily justified based on the major economic factors that inhibit realizing a higher demand. There are obvious economic factors to watch to see when increased housing sales are likely—and QE3 is not one of them. 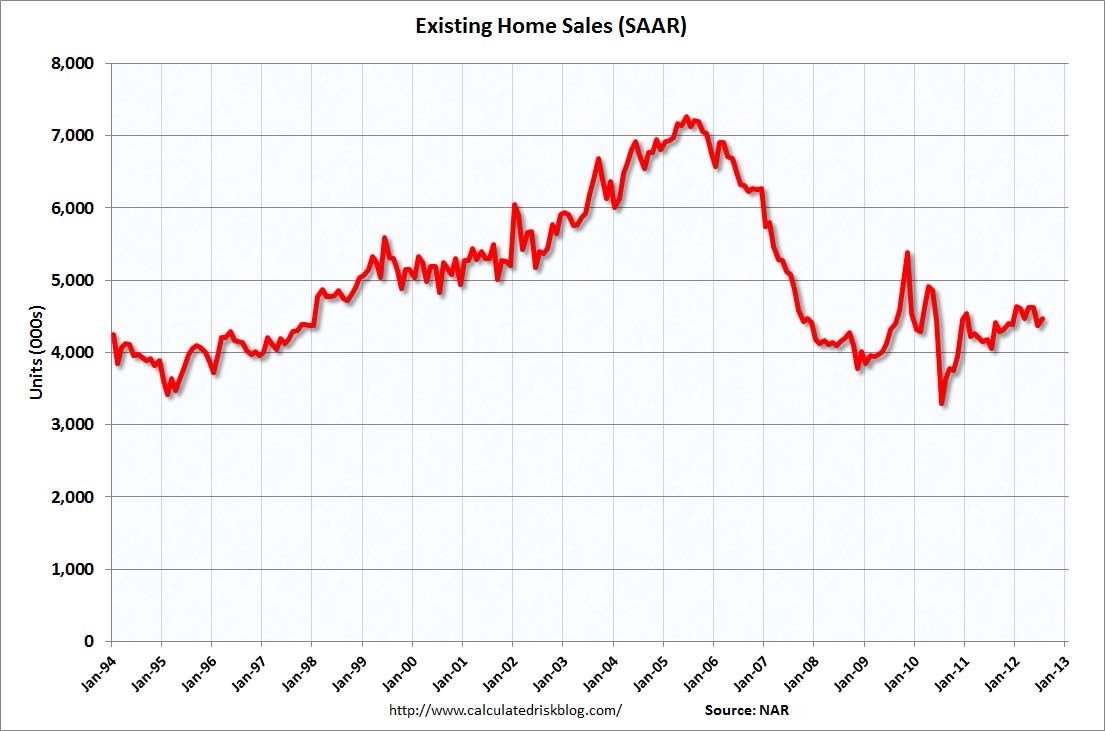 There is no reason to expect that the housing bubble peak above 7 million existing home sales per year is something achievable for many years to come. Therefore, the projected sales volumes between 5.6 million and 6.4 million per year with removal of all the Great Recession produced impediments is a reasonable estimate of the top for a fully recovered market.

The missing 1.1 million to 1.9 million buyers account for why home sales are where they are and are likely to remain there for the next couple of years. QE3 could not produce a magic flood of home buyers even if the banks were able and willing to process the mortgage applications.

Please provide feedback on this article in the “comments” section below.