Free Cash Flow May Be King, But It’s Not Infallible

Although free cash flow is hardly an infallible metric when it comes to evaluating the strength of a business, cash flow is generally considered far more reliable than net income. That point was underscored for me recently when Investing Daily senior editor Jim Fink inspired me to take another look at Financial Shenanigans, Howard Schilit’s classic tome on accounting gimmickry.

As Schilit notes, profits are typically subject to accrual accounting, which can involve a substantial amount of subjectivity even when a good faith effort is made in their calculation. Of course, that also leaves plenty of room for potential manipulation by less scrupulous management teams.

But that doesn’t mean that the income statement can simply be discarded in favor of the statement of cash flows. Instead, Schilit argues that one must understand their interplay. Toward that end, he offers one helpful rule of thumb when evaluating well-established companies: Net income should be validated by cash flows from operations. In other words, a high level of profits should be mirrored by a similarly high level of operating cash flow. Otherwise, it’s possible that profits were “financially engineered” rather than a true reflection of how a company performed.

With that in mind, I decided to go a step further and construct a screen that focuses on free cash flow, which is operating cash flow less capital expenditures. I was hoping to find companies that produced more free cash flow than net income.

But companies that typically generate high levels of free cash flow tend to be in the mature phase of their growth cycle, with Home Depot (NYSE: HD) offered as one famous example.

A little more than a decade ago, Home Depot routinely posted negative free cash flow because it was busy reinvesting in the growth of its business. But now that the market is saturated with its stores, the firm is generating robust free cash flow, but relatively anemic growth. Its capital expenditures are largely geared toward maintenance of its existing business rather than ramping up with openings of more new stores.

To guard against a similar scenario, I decided to include growth in capital expenditures over the trailing three-year period among my criteria. Additionally, I employed several other criteria to further pare the results to a manageable list of names, including a 5 percent or greater increase in inside ownership over the past six months. And while Schilit’s approach was reserved for large, established names, I applied the screen to companies with market capitalizations as low as $200 million.

Unfortunately, the names that passed my screen were largely beaten down, and many, such as FreightCar America (NasdaqGS: RAIL), have no apparent near-term catalyst for a turnaround.

The railcar maker, for example, has a leading 79 percent market share in coal cars. Though coal comprised almost 45 percent of the tons originated by Class I railroads in 2011, its dominance of the energy market is rapidly fading in favor of cheaper natural gas. In the 1990s, coal was responsible for generating 56 percent of electricity on average, but its share has steadily dropped over the past decade, and has now fallen below 40 percent this year.

Coal exports have risen dramatically over the past few years, but not nearly enough to offset the decline in domestic demand. And with natural gas prices likely to remain low until the US has the necessary export facilities in place to accommodate overseas demand, cheap natural gas seems to be a reality for at least several more years.

For now, FreightCar America is dependent upon the replacement cycle among the aging eastern coal car fleet. It boasts a strong balance sheet, which should help it to endure a weak demand environment, but its growth potential has been seriously impaired.

However, Applied Materials (NasdaqGS: AMAT) may offer the potential for a medium-term trade. The company is the leading maker of tools for semiconductor fabrication, though it also has small, but growing segments in solar power and flat-panel displays. The firm averages more than $1 billion in research and development spending each year, and now has an installed base of more than 22,000 tools across the three major chip industry segments. Most of its competitors are smaller firms that focus on specialized niches in chip fabrication.

The semiconductor industry is highly cyclical, and that constant boom and bust has not rewarded Applied Materials’ long-term shareholders. At present, its shares trade almost 20 percent below their 52-week high, due to chip foundries’ slackening demand, which compelled management to lower its guidance for the remainder of the firm’s fiscal year.

For its fiscal fourth quarter, which concludes at the end of October, the company forecast that sales would drop 25 percent to 40 percent sequentially. In early June, chip foundries began scaling back their orders due to both seasonal factors and global macroeconomic uncertainty.

Additionally, the chip business has become even more volatile, as technology has enabled foundries to shrink their lead times for procuring new equipment. Now foundries are better able to tailor their production to the peaks in new tablet and smartphone offerings. In fact, management has noted that peak demand has occurred during their fiscal second quarter (ended April) in each of the past three years. That happens to roughly coincide with highs in Applied Materials’ share price in each of those calendar years between February and March.

However, management expects normal levels of demand to resume in the following quarter and subsequent year, particularly as the ever-greater demands of the latest generation of mobile devices push chipmakers into high gear.

In the meantime, the $13.7 billion company has an extraordinarily strong balance sheet, with $2.2 billion in cash and just $1.9 billion in long-term debt. Its strong free cash flows support both a dividend (currently yielding 3.1 percent) and a share repurchase program, which bought back $500 million worth of shares (3.6 percent of shares outstanding) in the most recent quarter.

Barring a new global recession, the firm’s shares have already been sufficiently punished, and they should recover over the next six to 12 months. Analysts forecast earnings to rise 11.1 percent in 2013, and then 23.8 percent in 2014. As I noted earlier, this is more of a medium-term play, and it’s suitable only for patient, risk-tolerant investors: Set a slightly stingy buy limit at $10.50 and sell the shares once they hit $13.50. 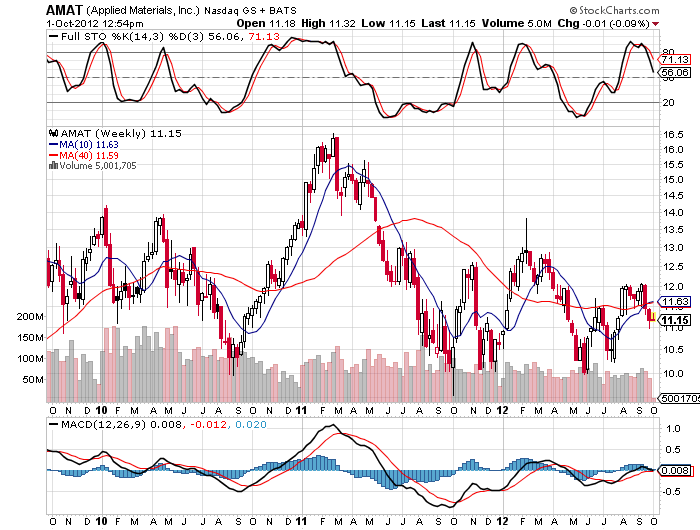