Some stocks are impossible to analyze or predict because investors are so enamored by the “story.” Silly things like a company’s profits have no bearing on the stock price. Amazon.com (NasdaqGS: AMZN) is one such stock. It is simply amazing to me how the stock of this Internet retailer continues to climb regardless of fundamentals!

After Thursday’s market close, Amazon’s third-quarter financial report revealed that the company experienced its first quarterly loss since 2003.  As Investing Daily contributor Chad Fraser noted back in July, the company warned that a third-quarter operating loss was possible, but the loss turned out to be worse than imagined. Excluding a $0.37 per share investment-related loss in daily-deal company Living Social, Amazon lost $0.23 per share – almost triple analyst expectations of a $0.08 per share loss. The one piece of “good” news – if you can call it that – is that Amazon’s operating loss of $28 million beat analyst estimates of $42 million, which marked the fourth consecutive quarter that operating losses were lower than expected. But celebrating losses just because they are less than they could have been seems perverse to me.

Revenue growth has always mattered more to Amazon investors than earnings, but Amazon also missed revenue estimates by $90 million and issued weak fourth-quarter revenue guidance that was $1.3 billion below what analysts were projecting. Yet, in Friday’s trading the stock closed up 6.9%! Granted, this post-earnings rebound ocurred after Amazon had suffered a 15% correction since mid-September on fears of an earnings and revenue slowdown, so today’s rebound could just be a sigh of relief that the realized slowdown wasn’t as bad as feared. But one would think that the expected slowdown would have been fully factored into analyst estimates and yet the company still missed these lowered expectations.

If Ronald Reagan was the Teflon president, Amazon is the Teflon stock. No bad news seems to “stick.” Reagan was also called “the great communicator” because of his optimism about the future and people were always willing to forgive short-term problems because they believed in his long-term vision. Similarly, Amazon CEO Jeff Bezos is also a great communicator who mesmerizes investors with long-term visions of complete global dominance of the retail world. Just look at this Bezos interview from 2011 and you feel a similar sense of excitement that one often felt listening to Apple’s (NasdaqGS: AAPL) Steve Jobs.  Amazon’s motto is “work hard, have fun, make history” and people just want to invest (as well as work there).

In other words, the sky is the limit! In Bezos’ world, worrying about current profit/loss statements is a waste of time – everything will work out in the end when Amazon’s huge investments finally pay off and the company dominates the retail world with an unsurpassable “network effect” of consumer information and sticky relationships based on earned goodwill. His immodest goal is to become “Earth’s most customer-centric company.” Not the U.S., not North America, not even the Western Hemisphere – but Earth’s. Bezos’ comment in Amazon’s 2010 shareholder letter that “we have unshakeable conviction that the long-term interests of shareowners are perfectly aligned with the interests of customers” sounds a lot like Mark Zuckerberg, CEO of Facebook (NasdaqGS: FB), who said at the time of the company’s IPO: “we don’t build services to make money; we make money to build better services.” In the 1989 movie Field of Dreams, the faith-based mantra was “If you build it, he will come” — meaning the baseball ghost of Shoeless Joe Jackson, the star of the 1919 White Sox world series team. Investors are showing a similar type of faith in Amazon.com’s promise that profits will someday come.

Does Bezos’ bluster include a bunch of hype? Sure, but it is more than that. Back at the turn of the century, many Internet companies that eventually went bankrupt made similar promises of world domination and their stocks momentarily skyrocketed on investor enthusiasm. But Amazon.com’s business offers real value and is not just hype. The company survived the dot.com bust and proved skeptics wrong, paying off all of its $2 billion in debt in 2009 (although it still has hidden debt in the form of operating leases). Just last month, Amazon.com hit an all-time high. Consider these facts:

Yes, the story looks great. But at a current 12-month trailing P/E ratio of 290 and a forward P/E ratio of 100, the stock appears to be priced to perfection and supported by wild dreams that may not materialize. And don’t forget that one of the company’s greatest competitive advantages versus brick-and-mortar retailers – no sales tax on purchases – has come to an end in California and several other states.

I can’t recommend buying this stock – or any stock – that trades at such a nosebleed valuation. But I would rather walk over 100 yards of red-hot coals than short the stock either.

Bottom line: I will admire Amazon.com from afar as a spectator, hoping for the best, expecting the worst, but investing my money elsewhere. 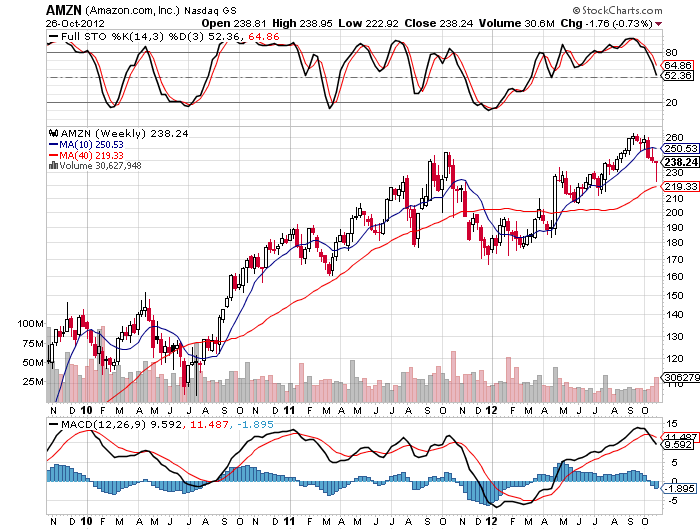