Is Apple’s Price Decline a Leading Indicator for the Stock Market?

Unless you’ve been living in a cave, you’ve probably noticed that Apple (NasdaqGS: AAPL) stock has recently seriously underperformed the overall stock market. On November 8th, the king of smartphones and tablets hit bear-market territory by falling intraday to a low of $533.72 — more than 24% below its all-time high of $705.07 hit seven weeks ago on September 21st.  Since the beta of Apple stock is 1.21, we would expect the S&P 500 to fall a bear-market-sized 20% (24%/1.21) to match Apple’s decline. So far, the S&P 500 has only fallen 6.3% intraday (-5.4% on a closing basis):

Apple and Nasdaq Are Leading Indicators for the S&P 500

Apple has the largest market capitalization of any stock in the world, so its stock is – by definition – a coincident indicator of the stock market. It comprises 17.4% of the Nasdaq-100 (more than double any other stock) and 4.3% of the S&P 500.  There’s some evidence that it – and the Nasdaq in general – are also leading indicators of the S&P 500 and Dow Jones Industrials. Take a look at the relative performance of the Nasdaq at big tops and bottoms for the stock market:

Based on this table, Nasdaq is slightly better than Apple at leading the market, but both have been good in the two most recent market turning points. This improving performance by Apple is probably due to the fact that it has become a larger component of the Nasdaq, so the index and the stock mirror each other more closely. Consequently, the recent bear market in Apple shares may be a warning sign for the S&P 500 and Dow Jones Industrials. I’m not the first person to notice the forecasting value of watching the Nasdaq. Market technician Gerald Appel (no relation to the company) – the inventor of MACD – has written extensively about the Nasdaq/NYSE relative strength ratio. And let’s not forget that major U.S. stock indices have formed the largest head-and-shoulders bearish chart pattern in 100 years.

What is Wrong with Apple?

Of course, Apple’s problems could simply be company-specific and portend nothing about the financial health of the other 499 stocks in the S&P 500.  So, what exactly is wrong with Apple? First, let’s not panic. Apple has been a huge stock-market  winner. Since the end of 2008, the stock has trounced the S&P 500 by more than ten-fold (720% vs. 62%):

But several adverse developments have occurred recently suggesting that it may be wise to curb your enthusiasm looking forward:

Apple is the opposite of the open, collaborative, slightly disorganized Google. It worked precisely because it was a dictatorship. But dictatorships without their dear leaders tend to fall to infighting, intrigue and inefficiency. This could be Apple’s future.

All of these problems at Apple lead some smart investors to conclude that Apple stock has further to fall. Bond king Jeffery Gundlach and money manager Martin Sosnoff see the stock falling back into the low $400s where it plateaued for almost the entire second half of 2011. NYU finance professor Aswath Damodaran very-publicly sold his Apple stock last April at $600 because momentum investors were causing the stock price to become too volatile, but Damodaran continues to believe Apple is worth $710 per share. Apple’s huge cash stash of $121 billion doesn’t hurt the bullish thesis.

Regardless of whether Apple is destined to fall back to $400 in the intermediate term, I believe the stock is near a short-term bottom, having come close to hitting short-term support at the May 18th low of $522.18. There is speculation that Apple’s next quarterly earnings report is going to be a “blowout” – partly due to Apple’s intentionally-massive increase in purchase obligations to third-party suppliers from $13.6 billion last quarter to $21.1 billion this quarter (page 38 of 10-K). There is also historical evidence that bear markets in Apple stock are followed by explosive earnings gains.

If the “blowout” speculation proves true – or even if it doesn’t but the speculation continues to build prior to the next Apple earnings release in late January – then the stock will probably experience a right-shoulder run-up to the $644 left-shoulder peak reached on April 10, 2012 sometime over the next three months. 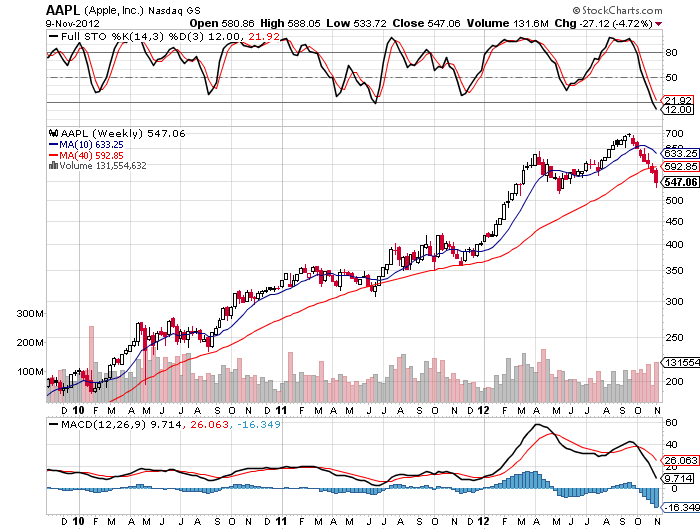