The Federal Reserve’s December 12th meeting was quite momentous. If I told you that the Fed was both: (1) ending its commitment to maintain its zero-interest-rate policy (ZIRP)  “at least through mid-2015,” and (2) not renewing its “Operation Twist” policy which involved the sale of $45 billion per month in short-term securities to buy the same amount of long-term securities, you might think it signaled the end of the Fed’s extraordinary monetary policy accommodation began in December 2008 during the depths of the global financial crisis.

Nothing could be further from the truth. In fact, Fed Chairman Bernanke is digging an even deeper hole for the U.S. economy with additional quantitative easing. Unbelievable!

Get Ready for More Money Printing with QE Infinity Plus!

Back on September 13th, the Federal Reserve unleashed Quantitative Easing (QE) Part 3, which here at Investing Daily we have affectionately called QE Infinity because it was an open-ended commitment to purchase $40 billion per month in mortgage-backed securities. At the time, I called QE Infinity “unnecessary and dangerous” because money printing doesn’t create jobs but simply increases inflationary pressures and financial asset prices. A majority of economists surveyed by the Wall Street Journal between Dec. 7th and Dec. 11th  recommended that the Fed stop quantitative easing altogether, with Wells Fargo economist John Silvia stating:

It’s distorting market prices and creating problems in the future. The Fed’s bond-buying was making long-term Treasuries too expensive without significantly easing problems in the labor market. The Fed needs to back away and let interest rates rise just a little bit.

Despite the opposition of economists, on December 12th The Fed announced the following policy actions:

Richmond bank president Jeffrey Lacker voted against both the new bond buying and the new inflation and employment targets for ending ZIRP, stating in his dissent:

Monetary policy has only a limited ability to reduce unemployment, and such effects are transitory and generally short-lived. Moreover, a single indicator cannot provide a complete picture of labor market conditions. Therefore, I do not believe that tying the federal funds rate to a specific numerical threshold for unemployment is an appropriate and balanced approach to the FOMC’s price stability and maximum employment mandates. I would prefer to describe in qualitative terms the economic conditions under which our monetary policy stance is likely to change.

QE Infinity Plus and ZIRP are Treated Differently

The specific inflation and unemployment rate numerical targets apply only to the ZIRP policy, not the QE Infinity Plus (i.e., bond-buying) program. Interestingly, it is the exact proposal put forth by Chicago bank president Charles Evans in a November 27th speech, except that the Fed decided on targeting inflationary expectations (measured by the Personal Consumption Expenditures Index) 1-2 years in the future instead of Evan’s 2-3 years in the future. The PCE Index rises about one-quarter less of a percent than the more-commonly reported Consumer Price Index (CPI), so translating the Fed’s new inflation target to the CPI would push the target to about 2.8%. Two-year inflation expectations (USGGBE02) based on two-year Treasury Inflation Protected Securities (TIPS) are currently only 1.27%, as measured by Bloomberg. Thirty-year inflation expectations rose as high as 2.58% — the highest since September — on news of the Fed’s newest QE expansion.

In the case of when to end QE Infinity Plus, the Fed will only look at  employment, but on a more flexible qualitative basis (i.e., “substantial improvement in the outlook for the labor market”) rather than the ZIRP’s strict numerical basis of 6.5%. Why the differing treatment? According to Fed Chairman Bernanke’s opening statement (pp. 2-3) at the press conference, quantitative easing is experimental and its long-term efficacy and detrimental side-effects are uncertain. Consequently, it will probably be discontinued faster than ZIRP:

The asset purchases are about creating some near-term momentum in the economy trying to strengthen growth and job creation. If future evidence suggests that the program’s effectiveness has declined, or if potential unintended side effects or risks become apparent as the balance sheet grows, we will modify the program as appropriate. Because we expect to learn more over time about the efficacy and potential costs of asset purchases in the current economic context, we believe that qualitative guidance is more appropriate at this time

Since inflation is a likely detrimental side effect of QE Infinity Plus, I’m sure that the Fed will look at inflation alongside employment even though Bernanke claims that “substantial improvement” in employment is the main criterion for QE continuation.

Removing the date commitment of mid-2015 for ZIRP only three months after announcing it does not inspire confidence in the Fed. Rather, it suggests policy chaos.  Granted, Bernanke claims that the change in ZIRP policy is not as dramatic as it appears, since the Fed’s outlook for both the unemployment rate and inflation through mid-2015 is that the 6.5% and 2.5% thresholds will not be met, but the fact remains that the Fed has now freed itself to raise rates much sooner than mid 2015 if necessary.

The objective of the Fed’s QE Infinity Plus program is to “maintain downward pressure on longer-term interest rates.” So why have long-term interest rates shot up since the announcement? Take a look at the yield reaction of the 10-year U.S. Treasury: 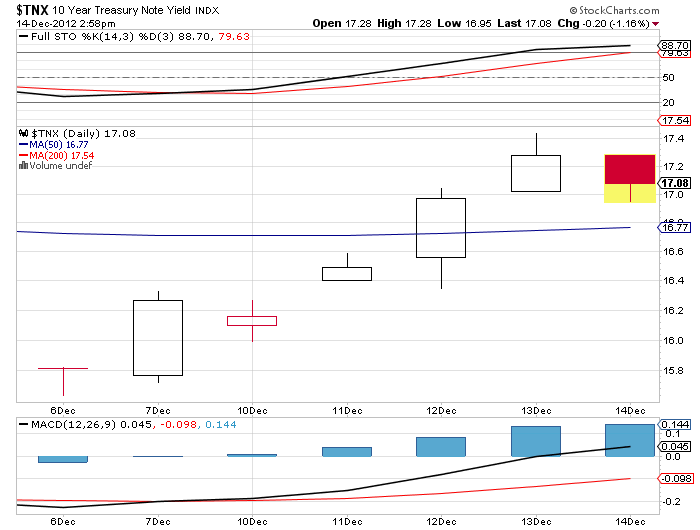 It has shot up from under 1.58% to over 1.70% in the past week – the exact opposite of what the Fed allegedly wants! According to Bentley University economics professor Scott Sumner, the problem is that the Fed is printing money to buy these bonds and the increased money supply is stoking inflationary pressure:

When the Fed buys bonds the money supply rises. Supply and demand still hold true, but we must think about two markets, bonds and money.  The value of money falls when the supply increases, at least in the long run.  Expectations of a decline in money’s value reduce the expected real value of future interest and principal, which is paid out in nominal dollars. That’s why more money means lower bond prices, other things equal.

So, moving forward, the Fed will buy $85 billion of bonds each and every month with freshly printed money. The ironic result is that inflation and long-term interest rates may rise much faster with QE Infinity Plus than it would have without!

Monetary U.S. Government Debt is the Real Motivation Behind QE Infinity Plus

Perhaps Bernanke realizes this and his real motivation is not keeping long-term interest rates super low. Rather, he actually wouldn’t mind if interest rates rise provided that inflation rises even faster. If Bernanke wants inflation above 2.5%, that would help explain why he doesn’t want the specific 2.5% inflation target to apply to the QE Infinity Plus program. With U.S. gross national debt (includes inter-governmental obligations) above 100% of GDP for the first time since the 1940s, the only way the federal government will ever remain solvent is by monetizing the debt through currency-debasing inflation.

According to Andrew Garthwaite, global strategist at Credit Suisse, governments throughout the developed world plan to keep real interest rates (i.e., nominal interest rates minus inflation) negative for “at least a decade” in order to reduce government debt burdens. Goldman Sachs disagrees, stating that U.S. real economic growth is set to accelerate and real interest rates are likely to rise in the second half of 2013, which will hurt gold prices.

I’m siding with Credit Suisse on this issue; Goldman Sachs is wrong now, just like it was wrong three years ago when it made a similar argument. QE Infinity Plus will have a significant money-printing inflationary effect that will outweigh any pickup in real economic growth. Guess what performs best in a negative real interest rate environment? Stocks and commodities like gold bullion. I would have a healthy allocation to both.