This Operator of “Aerial Workhorses” Is Poised to Soar

Igor Sikorsky, builder of the world’s first functioning helicopter, was passionate about these flying machines: “The helicopter approaches closer than any other [vehicle] to fulfillment of mankind’s ancient dreams of the flying horse and the magic carpet.”

Farther out to sea and faster back to shore—that’s increasingly the demand of energy companies on Bristow Group (NYSE: VTOL), the leading provider of helicopter services for the offshore oil and gas industry.

The surging price of crude oil this year, combined with advances in drilling technology, is allowing companies to operate rigs in water that’s deeper than previously feasible. Bristow is positioned to reap more of the profits from this deepwater activity than any other helicopter operator.

Despite the broader stock market slump, Bristow’s shares have popped about 13% over the past month, as oil prices resume their upward trajectory and the company signs new contracts.

I’ve covered aerospace/defense for decades. In my youth, as the editor of a publication devoted to rotorcraft, I even flew helicopter gunships. That’s me, emerging from the cockpit of a Bell Textron Cobra AH-1 attack helicopter. 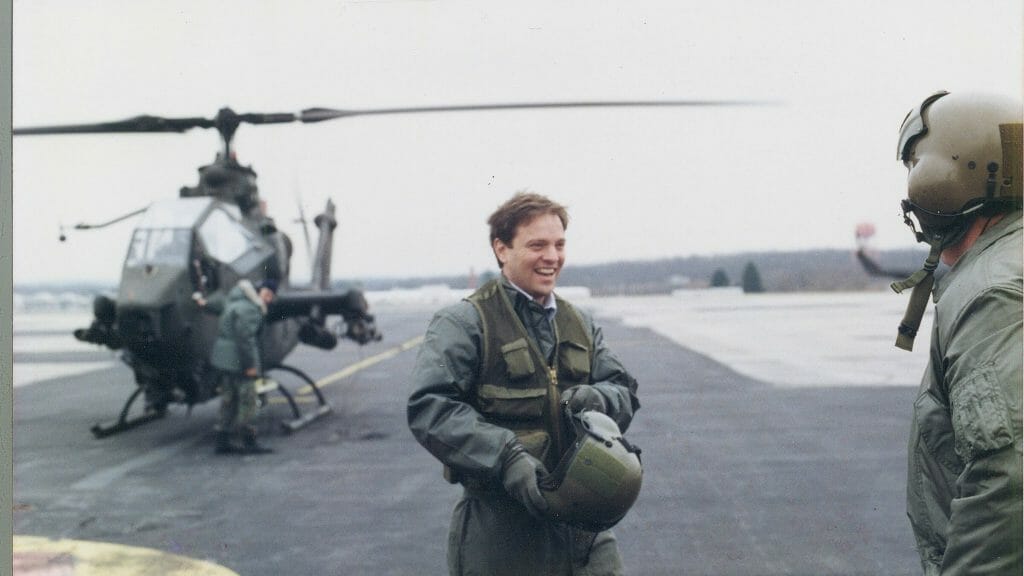 So, yeah, I know a thing or two about helicopters…and how to invest in them.

Based in Houston with a market cap of $813.7 million, Bristow currently operates 229 aircraft, of which 213 are helicopters and the rest fixed wing. The firm boasts the world’s largest commercial offshore rotorcraft fleet.

About 99% of Bristow’s revenue stems from offshore oil and gas transportation. The remaining revenue is generated by the company’s search and rescue services, helicopter maintenance facilities, and pilot training academy. Bristow’s presence is vast, with operations in virtually every region of the world.

High oil prices are stimulating greater investments in offshore wells, raising rig utilization. These rigs require helicopters to transport crews and gear back and forth on a frequent, intraday basis—and to do it safely.

Helicopter activity in the offshore support sector is directly proportional to the capital and exploration outlays of the oil industry. It’s also axiomatic that capital and exploration expenditures are directly influenced by the prices of crude oil. As oil prices again close in on the $100 per barrel threshold, companies such as Bristow are assured of steady demand.

As the largest company of its type, Bristow is thriving from renewed interest in deepwater drilling around the world. Shallower oil prospects are always drilled first. For that reason, the prolific oil discoveries of the future like beneath water deeper than 600 feet—the level typically considered the deepwater mark.

Bristow is in rapid expansion mode among its offshore energy clients in Argentina, Brazil, Colombia, Mexico and Venezuela. These countries are all heavily dependent on the oil industry, creating a reliable, intrinsic need for the unique capabilities of helicopters. They’re also enjoying greater oil demand this year, as countries look for alternatives to Russian oil and gas due to Western sanctions.

But Latin America isn’t the only source of growth. Bristow paid $250 million to acquire Cougar Helicopters, the largest offshore energy helicopter operator in Canada, another country where oil and gas activity is thriving due to Western sanctions against Russia for its invasion of Ukraine.

Bristow is expanding its non-energy work as well. The company’s Aberdeen, Scotland-based subsidiary took over the United Kingdom’s helicopter search and rescue operations. The contract is worth £1.6 billion and it ends 70 years of search and rescue that historically had been performed by the Royal Air Force (RAF) and Royal Navy.

Bristow’s modern fleet of helicopters, including Sikorsky S-92 and AgustaWestland 189 models, will replace the government’s aging Sea Kings. Under the contract, 22 helicopters operate from 10 locations around the UK.

The Helicopter Industry Takes Off

According to the results of new research report released August 24, strong demand is forecast in every region of the world in all rotorcraft sectors, especially in offshore transport.

For the next several years, oil and gas companies will continue to rely on Bristow to make the most of every working minute on remote rigs. But the company is taking steps to insulate itself from the cyclical nature of the energy patch.

Helicopters are complex machines that require considerable maintenance; operating them is a notoriously capital-intensive activity. To free up cash returns to shareholders, Bristow over the next few years will expand its leasing program to encompass up to 30% of its fleet.

Bristow also emphasizes longer-term customer contracts that allow it to pass along surcharges for fuel and maintenance, which protects the company’s bottom line from spikes in overhead.

Moreover, it’s common practice for Bristow to rebuild a helicopter two or even three times, which means any given machine in the field can offer up to three decades of high-margin operation.

Looking for an alternative way to cash in on the resurgence of oil and gas prices? Consider this helicopter stock, which gets scant attention from the financial media. The analyst consensus calls for VTOL to reach $43 per share over the next 12 months, which implies a gain of 48%. The stock currently trades at about $28.60, above its 50-day moving average of $25.60, which is a bullish sign.

In today’s bear market, a projected gain of nearly 50% over the next 12 months is nothing to sneeze at. As the energy patch continues its dogged search for remote offshore reserves, this helicopter stock will continue to gain altitude.

Editor’s Note: Looking for additional alternative investments, to weather this volatile bear market? Helicopters aren’t the only means to get high (so to speak). Take a look at cannabis and hallucinogens, which are increasingly legal and profitable.

I urge you to read my new book: The Wide World of Weed and Psychedelics. The product of years of painstaking research, my book is now available for sale.

You can reap exponential profits in the psychotropics revolution, but you need to pick the right investments. My book is your definitive guide for making money in the booming marijuana and psychedelics industries. Click here to order your copy.