Humanity is beset by a litany of woes: terrorism, environmental degradation, civil strife, erratic weather caused by climate change—you name it. These challenges threaten all types of governments and businesses in every region of the globe.

One company is the leader in helping beleaguered managers on the front lines: Tetra Tech (NASDAQ: TTEK). With a market cap of $1.76 billion, Tetra Tech provides consulting, engineering and technical services for the water, environment, energy, infrastructure, and natural resources sectors.

Tetra Tech’s clients include federal, state, and local government agencies in the US, as well as commercial and international clients. The company also has a growing presence in the energy sector, for pollution prevention and remediation.

Founded in 1966 and headquartered in Pasadena, California, Tetra Tech prepares facilities, infrastructure and supply chains for the worst—and comes to the rescue if the worst actually occurs.

For nearly five decades, Tetra Tech has responded to thousands of chemical, biological, radiological, nuclear, and explosive releases, as well as natural calamities such as hurricanes, tornadoes, floods, and earthquakes.

Notably, Tetra Tech supported the US Environmental Protection Agency (EPA) in 2005 with response and remediation services for environmental emergencies resulting from Hurricanes Katrina and Rita and the subsequent flooding in New Orleans, Louisiana.

Part of the company’s Katrina-related services included search and rescue, deploying as many as 65 responders to affected areas.

With the emergence of international markets that are interconnected and operate around the clock, companies increasingly rely on global supply chains to maximize efficiency. However, the vast scope of these supply chains makes them vulnerable to catastrophic disruption.

The tsunami-triggered nuclear crisis in Japan in 2011 is a stark case in point. The earthquake and massive tidal wave that followed in that country disrupted a wide range of global supply chains, casting a spotlight on the inadequate disaster preparedness of many outsourcing companies.

Tetra Tech is now involved in the establishment of tsunami warning centers commissioned by the US government.

When unexpected disaster strikes a company, particularly an outsourcing firm with far-flung operations, decision makers often find themselves at a nexus, where supply chain management and emergency response intersect.

Without a well-prepared roadmap in hand, the supply chain—and by extension, the company—can fall to its knees. Tetra Tech has carved out a specialty and track record as the “go to” company for disaster preparedness and response.

However, Tetra Tech is the leader in crisis management, whereas the operations of its rivals are considerably more diffuse and their fortunes are more closely tied to the cyclical construction sector.

From Fracking to Fallout

Tetra Tech also is a play on the environmental ramifications of booming shale gas production in North America.

Natural gas is considered a “clean” source of energy, but the use of hydraulic fracturing to extract it from shale formations—a technique known as “fracking”—provides opportunities for Tetra Tech.

Fracking remains controversial because it often results in contaminated soil and groundwater; Tetra Tech mitigates this pollution and reclaims damaged water and land.

As fracking gains momentum and environmental regulations governing its use become stricter, the company’s management expects revenue from oil and gas clients to reach at least $300 million in 2013, twice the amount in 2012.

Demand for nuclear power generates another stream of reliable revenue for Tetra Tech. The company provides a full suite of services to the nuclear power industry, including siting, licensing, administration, and decommissioning of nuclear plants.

At 20 percent of the US electrical power mix, nuclear is here to stay, regardless of the pending wave of shutdowns. What’s more, Tetra Tech profits from both sides of the nuclear coin—the company’s services are recruited for new construction as well as plant closures.

Meanwhile, continuing social unrest around the globe puts the company in line to receive contracts for risky work in various regional “hot spots.”

In May, Tetra Tech announced that it had won a contract worth $100 million from the US Department of State, for the building and renovation of diplomatic facilities overseas. This award comes on the heels of the deadly and highly politicized terrorist attacks on the US diplomatic compound in Benghazi, Libya.

In June, Tetra Tech announced that it had been awarded a $400 million contract to provide technical assistance for the US Agency for International Development (USAID) clean energy program in the dangerous operating environs of Afghanistan, Iraq, Pakistan, South Sudan and Yemen.

Mirroring the experience of many government contractors, Tetra Tech’s stock has taken a hit in recent months, because of fears that federal budget sequestration would hurt revenue (see graph, below). However, this pessimism is unwarranted and creates a rare opportunity to buy an intrinsically strong company at attractive prices.

Regardless of Washington’s budgetary follies, the share price should get a boost this year from accelerating global growth, worsening unrest overseas, persistent pollution woes, and continued prosperity in the energy sector. 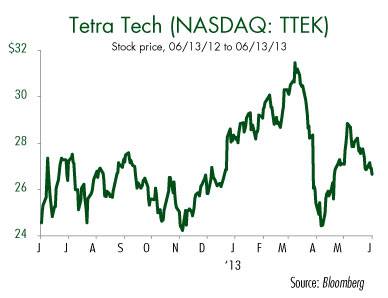 Revenue in the second quarter was $521 million, up 9.2 percent compared to $477 million in the same quarter last year.

Tetra Tech sports a 12-month trailing price-to-earnings (P/E) ratio of only 15.9, compared to the trailing P/E of 20.7 for its industry of technical services. Analysts’ consensus calls for Tetra Tech to hit $1.66 in EPS for its current fiscal year.

The stock is a bargain at current valuations—and a good play on a world that’s likely to remain one big trouble spot for some time to come.