The deal making has officially concluded; the order books are now closed. This year’s Paris Air Show, ended June 23, witnessed a robust roster of sales to airlines that are optimistic about economic growth and willing to spend billions of dollars for new aircraft.

The biennial gathering, the world’s largest and most prestigious showcase for commercial and military aircraft, marked its 50th anniversary this year.

During its seven-day run last week, the Paris Air Show attracted more than 350,000 attendees, as well as 2,200 corporate exhibitors from 44 countries. The exhibitor count was the highest in 10 years.

Now that the massive gathering is over and exhibitors have vacated the show’s location at Le Bourget airfield, what does it all mean for investors?

The upshot: Among all of the world’s aircraft makers, Boeing (NYSE: BA) is in the best position to benefit over the long haul from the aircraft sector’s resurgence.

Every Paris Air Show features an epic duel for primacy between Boeing and its archrival Airbus, a subsidiary of the European Aeronautic Defence and Space Company, or EADS (Paris: EAD).

EADS is a pan-European behemoth managed and subsidized by its major stakeholders of Germany, France and Spain. The company’s Airbus division and Boeing both announced several multi-billion dollar orders at Paris. However, Boeing’s successes at the show, combined with other contract wins earlier this year, put the Chicago-based company on track to reclaim the title from Airbus as world’s largest aircraft maker by revenue.

After years of struggle following the Great Recession of 2008-2009, the entire aviation sector was in high spirits at the Paris Air Show, as major aircraft manufacturers popped the champagne to celebrate record orders.

The IATA also reported that global airlines would invest $3.5 trillion to buy 27,800 new airplanes over the next two decades.

In flying demonstrations over the skies of Le Bourget, Boeing showed off its long-haul advanced jet, the 787 Dreamliner, which returned to production after Boeing fixed its highly publicized problems with lithium-ion batteries.

In a coup for the Dreamliner, Boeing won firm orders for huge purchases of the aircraft and other wide-body jets. Five companies at the show pledged a combined total of $30 billion to buy 102 copies of the 787-10, the stretched version of the Dreamliner.

Among the customers is GECAS, the aircraft-leasing arm of General Electric (NYSE: GE) to buy 10 of the 787-10 jets.

Making its maiden flight at the show was the Airbus A350, a long-haul rival to the Dreamliner that’s scheduled to go into production next year. The 787 and the A350 are constructed with durable, lightweight carbon composites, which reduce their fuel consumption and need for maintenance.

However, the unveiling of the A350 was trumped by Boeing’s Dreamliner orders, which are a breakthrough not only for the revenue, but also because they assuage concerns over the safety of the plane’s battery.

In tandem with the commercial industry’s return to health is continued strong demand for military aircraft. It shouldn’t be forgotten that the Paris Air Show performs double duty as a huge bazaar for military aircraft, both fixed and rotary wing, and many customers, notably new NATO members, continue to spend lavishly.

Boeing also serves as a play on persistent demand for military aircraft. Despite budgetary austerity in the US and Europe, the US continues to generate more foreign sales of weapons systems than any other nation on earth. This fact won’t change, despite Pentagon cutbacks.

One of America’s fastest-growing military export niches is aircraft. Fixed-wing combat airplanes account for one third of all global arms transfers, with US-based manufacturers such as Boeing topping the list of sellers.

According to analysts’ consensus, the global military aircraft market was valued at $38 billion in 2011; it’s expected to reach $71.9 billion by 2021, representing a compound annual growth rate of 6.58 percent during the forecast period.

The greatest demand for fighter jets will come from regional “hot spots” engaged in arms races. Boeing sells several popular jet fighter models to developing nations around the world. The company’s F/A-18 E/F Super Hornet is a particular favorite of developing nations that are seeking to enhance their defenses.

Boeing’s stock has been on a tear lately (see graph, below). However, the company’s enormous order backlog and latest operational results indicate that there’s plenty of upside left. 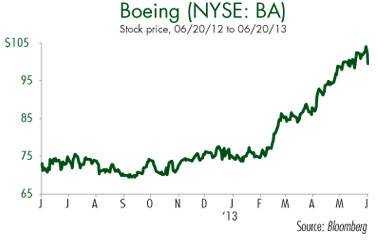 Boeing reported first-quarter 2013 earnings that handily surpassed analysts’ estimates, while at the same time assuring industry observers that its recent 787 battery woes are in the rear view mirror and would affect neither revenue nor profits.

Revenue fell 3 percent to $18.89 billion from $19.38 billion, but the drop stemmed from the temporary battery problems that delayed Dreamliner orders already in hand.

Boeing’s management reaffirmed earlier guidance that it expected EPS of $5 to $5.20 a share for the year. Wall Street’s consensus is even more optimistic, calling for the company to post EPS of $6.47 for the full year.

The plane maker’s exceptionally strong financial shape has allowed it to reward shareholders. In December 2012, Boeing raised its quarterly dividend by 10 percent to 48.5 cents per share from the previous payout of 44 cents per share.

Boeing also announced the resumption of its stock buyback program, with repurchases expected to reach about $2 billion this year.

With a 12-month trailing price-to-earnings (P/E) ratio of 18.7, Boeing’s stock is attractively valued. The P/E of 17.5 for the company’s industry of aerospace/defense is only slightly lower.

Boeing’s first-quarter backlog of orders grew to a record $392 billion, including $20 billion of net orders during the quarter. The company’s successful outing last week in Paris considerably fattened this existing order book, assuring healthy growth for several quarters to come.