Online gaming isn’t just an addiction among adolescent computer geeks—an increasing number of adults are getting hooked on the pastime, making it big business.

Nowhere is online gaming more popular than in China, which is home to more than 120 million practitioners, the most of any country.

According to the technology research firm Strategy Analytics, the global online gaming market generated $12 billion in revenue in 2012, up from $5.2 billion in 2007. Strategy Analytics estimates that the market will reach about $15 billion in annual revenue by the end of 2013, with China accounting for the largest portion at about $8 billion.

The trend is so powerful that the ruling Communist Party of China (CPC) no longer opposes online gaming as an example of Western decadence but now embraces it. The CPC develops and markets games designed to teach the masses about their responsibilities under socialism.

Tencent has risen to the top of this fiercely competitive space, which offers outsized opportunity for growth as China’s middle class expands and restlessly seeks new diversions. However, gaming also involves investment peril, due to the proliferation of smaller companies with dodgy balance sheets. Tencent is the most financially solid company in the field.

The other China-based leaders in online gaming, in order of annual revenue, are Netease (NASDAQ: NTES); Changyou (NASDAQ: CYOU); Shanda Games (NASDAQ: GAME); Perfect World (NASDAQ: PWRD); and Giant (NYSE: GA). Tencent leads the pack and indeed the rest of the world, with 40 percent of market share measured by revenue.

Tencent and its competitors cleverly exploit the passion for gaming by offering free access to many online games at their basic, easy-to-play levels, but start charging fees if a player wants more challenging upgrades. More than 40 games are in Tencent’s pipeline, with such evocative titles as Dungeon & Fighter and War of Zombie.

Not Just for Kids

The consultancy NPD Group reports that nearly 50 percent of gamers are between the ages of 18 to 49 years; the average gamer is now 34 years old. Surprisingly, NPD also found that women account for 40 percent of the market and their share is growing every year.

In China, online gaming is nothing short of an obsession amid a growing army of Internet devotees. According to government statistics, the country’s 718 million Internet users now amount to 52.7 percent of the country’s population and spend an average of 18.7 hours online per week, for a total of about 472 billion hours. Chinese gamers devote an average of eight hours per week to online gaming.

At the same time, China’s technology companies are driving global growth and innovation in the Internet, a dynamic assisted by the government’s latest Five Year Plan which calls for significant investments in the country’s online infrastructure.

The convergence of these trends has been pushing Tencent’s stock higher over the past 12 months (see graph, below). The company’s latest operational results indicate that the stock should continue riding the gaming wave higher. 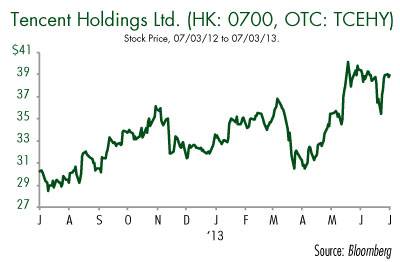 Tencent’s first-quarter earnings were $649.4 million, an increase of 17.3 percent quarter over quarter and a jump of 37.4 percent year over year.

As I wrote in a June 3 article on Investing Daily, SINA Corp is an up-and-comer in the social media space and is the best play now on the proliferation of microblogging in China.

Comcast, the nation’s leading provider of cable and communications products and services, has teamed with various entertainment companies to offer premium gaming services as part of its pay cable package.

MGT formerly owned a portfolio of legacy patents, which it has now sold. With a market cap of $26.9 million, $7 million in cash on hand and no debt, MGT intends to devote much of its resources on marketing, to expand its online user base. MGT is a promising company, but its stock is only suitable for aggressive investors willing to shoulder a high level of risk.

Meanwhile, Tencent’s dominance of online gaming in China remains assured for the foreseeable future. The company boasts a whopping market cap of $72.28 billion, with $4.86 billion in cash on its balance sheet, making it the powerhouse among its smattering of smaller rivals.

Tencent is putting its considerable war chest of cash to good use, by adapting its gaming platforms to smartphones and tablets, to stay abreast of the accelerating transition to mobile devices.

Tencent’s market lock is abetted by the Chinese government’s ban on all foreign business investment in the country’s Internet sector.

The company also is making acquisitions to expand outside of China. In 2012, Tencent acquired roughly 48 percent of US-based Epic Games for an undisclosed sum, outbidding Time Warner subsidiary Warner Brothers. Epic produces many bestselling series, such as Gears of War and Infinity Blade.

Tencent is a major presence in e-commerce, another fast-growing sector in China. According to the technology consultancy Forrester Research, annual online retail sales in China will reach $159.4 billion in 2015, compared to $48.8 billion in 2010.

Demand for consumer discretionary items is soaring in China, as the populace earns more money and China’s authorities put in place policies that encourage domestic consumption. Reinforcing this trend is a government-sanctioned shift away from the economy’s heavy reliance on exports.

As China’s consumers gain greater affluence and migrate to urban areas, they’re increasingly susceptible to advertising—especially the online ads for which Tencent specializes.

Tencent sports a 12-month trailing price-to-earnings (P/E) ratio of 34.7, compared to 23.9 for its industry of Internet information providers. But that’s a fair price to pay for the stock. Tencent offers greater growth prospects than its peers, with considerably less risk.