“Bureaucracy expands to meet the needs of the expanding bureaucracy.”
— Oscar Wilde.

Bureaucracies are abhorrent to many of us, but they form the epoxy of modern life. Nowhere is this reality more apparent than in America’s vast health care sector.

According to estimates from the US Centers for Medicare and Medicaid Services, total health care spending in the United States will grow from $2.8 trillion in 2012 to $4.8 trillion by 2021, an increase of 70 percent. Roughly a quarter of this spending is consumed by administration, not patient-centric services.

Weighing into this paper morass: the Patient Protection and Affordable Care Act (PPACA), commonly called Obamacare. Love it or hate it, President Obama’s signature domestic achievement is the law of the land and its implementation will require a bewildering array of forms handled by an army of bureaucrats.

These clerical warriors will report to a newly appointed corporate marshal: UK-based Serco Group (LSE: SRP). With a market cap of $3.3 billion and more than 120,000 employees, Serco delivers administrative and logistical support to government and private clients in over 30 countries.

This month, the White House announced that it had awarded Serco a “cost plus” fixed-fee contract initially worth $1.25 billion, to process applications under Obamacare for health insurance and tax credits.

It’s a massive undertaking, but Serco is accustomed to big and demanding clients. The company has long experience as a US government contractor, for the Pentagon, intelligence agencies and the State Department.

Serco’s latest contract to facilitate Obamacare not only provides a huge revenue shot in the arm but also positions the company for copious amounts of future administrative work, as the complex health care law unfolds.

Serco will help the federal government and states decide who is eligible for insurance subsidies and tax credits, as well as for Medicaid. The company also will play a role in determining who is entitled to exemptions from tax penalties imposed on individuals who forgo health insurance starting next year.

As the contract states: Serco’s responsibilities include “intake, routing, review and troubleshooting of applications.”

Serco already generates about 16 percent of its revenue in the US. The new contract takes effect October 1; the Obama administration has indicated that it might expand and extend the 12-month contract when it expires.

Federal budget cutbacks are generally bad news for government contractors, but austerity can actually generate more work for administrative experts such as Serco, which are asked to step into the void left by the downsizing of public agencies. This dynamic is especially salient in the health care sector.

Despite the increasing digitization of all facets of recordkeeping in society, Americans are expected to file a huge amount of paper applications to meet Obamacare’s requirements.

It’s not the purpose of this article or of Investing Daily to judge the merits of Obamacare; we’ll leave that to the politicians and pundits. But whether the law is good social policy or a wasteful monstrosity, one fact is clear: Obamacare’s red tape will translate into plenty of green for the best-positioned companies.

According to the American Action Forum, a Washington-based advocacy group, Obamacare has so far cost $30.8 billion and 111.4 million hours for individuals, health care providers and businesses to simply complete the necessary paperwork. The forum estimates that 55,742 employees working 2,000 hours per year will be needed to process all of the law’s provisions.

Major legislation of any type usually requires bureaucratic procedures for proper implementation. That’s why one of the hottest trends in the health sector is federally mandated electronic recordkeeping. The US still ranks as the fourth lowest among industrialized nations in terms of digitizing medical records and applications, paving the way for huge multi-year growth among outsourcing companies such as Serco.

One of Serco’s major competitors is Quality Systems, Inc. (Nasdaq: QSII), based in the US. Quality Systems develops information networks that automate medical and dental practices, but it’s a considerably smaller company and can’t match Serco’s proven ability to shoulder huge projects.

Among Serco’s most daunting tasks will be to set up and operate a mammoth mailroom, where it will receive hard copy applications and supporting documentation from individuals and employers.

Serco must not only process this paperwork and help bring it to fruition, but it must also make digital copies and destroy the paper originals.

This month, the UK government launched an investigation into Serco’s prison contracts in that country, under the suspicion that the company has been overcharging for certain services. This unexpected development sent the stock tumbling (see below). 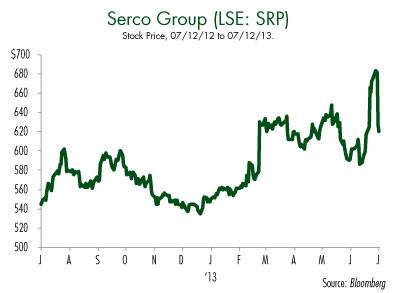 If Serco is found culpable, it could lose some contracting work from the British government, further pushing down the stock over the short term. However, over the long haul, a wholesale loss of contracts isn’t in the cards in any country, because few companies can match Serco’s size and expertise. Moreover, this sort of audit—although unwelcome for Serco—is not unusual in the contracting field.

The audit is likely to drag on for at least another month. If Serco is cleared, the stock should immediately soar. Regardless of the investigation’s outcome, it’s unlikely to materially affect the company’s long-term prospects.

One auspicious sign: the US government seems unconcerned by Westminster’s actions and still saw fit this month to award Serco its huge health administration contract.

Serco’s first six months of fiscal 2013 ended June 30; the company will post the results on August 29.

Serco’s EPS has grown by nearly 19 percent a year for the last five years. The analyst consensus is that the company’s EPS will continue this pace of growth for 2013.

Now offering a dividend yield of 1.7 percent, Serco has racked up a three-year compounded dividend growth rate of 37 percent.

Serco is currently targeting public and private clients in China, India, Brazil, and Turkey, an expansion that should drive revenue, earnings and dividend growth for the next several quarters. For aggressive investors, now’s an opportune time to buy the stock while it’s beaten down by ephemeral politics.