E-Commerce Jumps to a Latin Beat

As an investment destination, Latin America carries a lingering stigma. Many investors still view the region as undeveloped and riddled with civil strife, poverty, corruption, and violent crime—in short, too risky. In the financial media’s coverage of emerging markets, Asia seems to dominate the headlines.

Many Latin countries undeniably struggle with a multitude of woes, but a preoccupation with the region’s age-old afflictions misses the bigger and considerably more upbeat picture.

Latin America is home to a growing, increasingly educated and computer-literate middle class. And more and more of these Latin consumers are flexing their newfound purchasing power online.

Often referred to as “the eBay of Latin America,” MercadoLibre functions in the same manner. Indeed, eBay (NASDAQ: EBAY) holds an 18 percent ownership stake in MercadoLibre.

Headquartered in Buenos Aires, Argentina, MercadoLibre (which means “free market” in Spanish) hosts automated web-based commerce platforms that allow businesses and individuals to list items and conduct sales and purchases online in an auction or fixed-price format. MercadoLibre’s mode of operation is familiar to anyone who’s used eBay or Amazon (NASDAQ: AMZN).

MercadoLibre also offers MercadoPago, an integrated payments mechanism similar to eBay’s PayPal by which users send and receive payments online. In addition, the company’s MercadoClics program allows businesses and individuals to promote their products and services through online display and text advertisements.

As the largest company of its kind in Latin America, MercadoLibre’s dominance confers competitive advantages that elude even eBay and Amazon. As opposed to the more homogenous cultures of North America and Europe, the countries south of the border represent a rich and cacophonous variety of languages, currencies, customs, and regulations. It’s a high barrier to entry over which MercadoLibre has already vaulted. 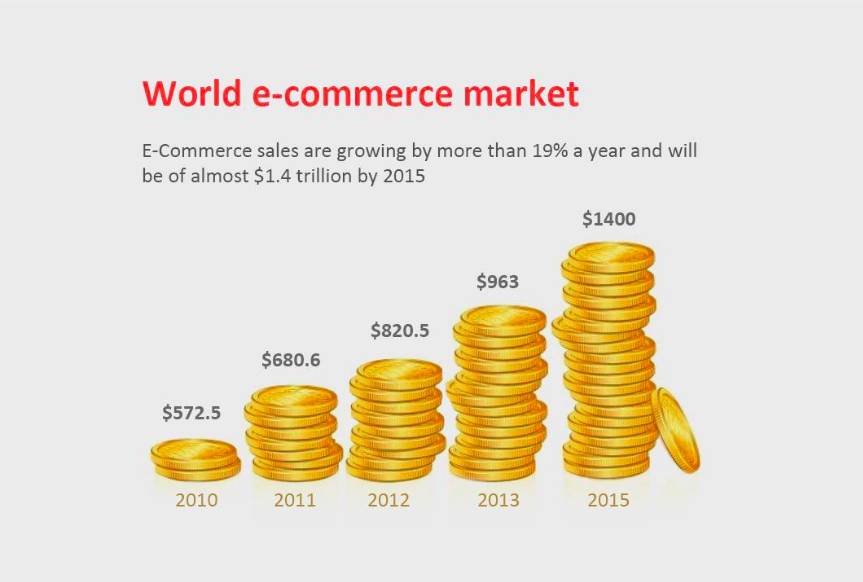 MercadoLibre’s room for regional growth is substantial. According to a 2012 study conducted by América Economía Intelligence (AEI) and Visa (NYSE: V), e-commerce activity in Latin America soared by 42.8 percent between 2010 and 2011 to hit $43 billion in sales, nearly twice the $22 billion that was posted in 2009.

Factors for e-commerce growth in Latin America include greater credit and debit card usage; the proliferation of social media and group shopping sites; enhanced online security that reinforces consumer confidence; and an expanding pool of “e-tailers” that reach customers through their websites.

Another catalyst is mobile commerce. As my colleague Chad Fraser explains in his August 22 article on Investing Daily, the trend toward mobile payments is picking up speed around the world.

For MercadoLibre, mobile now represents 3.5 percent of its traffic. The company is working hard to expand its mobile presence, through the continual development and release of new apps.

Shares of MercadoLibre have maintained momentum so far this year, despite the overall pullback of emerging markets (see stock graph, below). 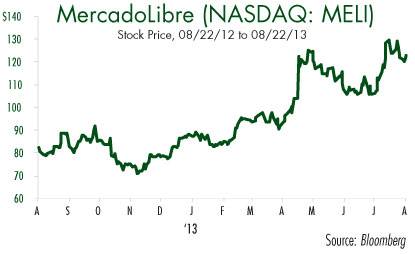 The company’s resilience in recent months amid the regional market slump bodes well for the stock’s future performance, as global economic recovery accelerates and the Latin middle class increasingly indulges its desire to shop online.

Throughout Latin America, leaders are plowing considerable sums into infrastructure spending, including Internet development, and pursuing policies designed to shift their economies from a heavy dependence on exports toward domestic demand.

Governments also are implementing reforms such as individual and corporate tax relief, minimum wage hikes and business deregulation, all designed to boost indigenous consumption. These trends are substantial tailwinds for MercadoLibre.

In August, the company reported second-quarter operating results that blew past analysts’ expectations.

MercadoLibre’s earnings increased 18 percent compared to the same quarter a year ago, driven by higher merchandise volumes and payment transactions. The company also posted a year-over-year jump of more than 23 percent in the size of its user base.

Total revenue in the quarter rose 26 percent to $112.18 million from $88.84 million in the year-ago period, marking the third straight quarter of revenue growth. The consensus revenue estimate had been $107.62 million.

Items sold on MercadoLibre during the second quarter increased 27 percent to $20.1 million, while total payments transactions through MercadoPago grew 35 percent to $7.4 million.

The company’s number of total registered users at the end of the second quarter was 90.2 million, up 23 percent year-over-year. New registered users during the period increased 22 percent to 4.5 million.

The stock sports a 12-month trailing price-to-earnings (P/E) ratio of 51.8, pricey compared to the trailing P/E of 31.4 for the company’s industry of Internet software and services.

However, with a market cap of $5.34 billion and a powerful shareholder in eBay, MercadoLibre is in solid shape to survive the vicissitudes of its often volatile field and prosper over the long haul.

For the past five years, MercadoLibre has racked up annual average earnings growth of 35.4 percent. In fact, MercadoLIbre has grown every year since it was founded in 1999, a predictability that should only get stronger as e-commerce continues to supplant bricks-and-mortar retailing in Latin America.

Even if emerging markets remain in their funk this year, the case for investing in MercadoLIbre isn’t solely predicated on the region’s future gross domestic product growth, although it certainly plays a role. Rather, the company is a direct play on the rise of a sophisticated middle class that is inevitably adopting the online shopping habits of the developed world.