Solar Stocks Turn Up The Heat

Investors who dismiss solar energy as a green hobby for Birkenstock-wearing environmentalists are missing out on big potential profits, as power from the sun becomes more pervasive, larger in scale and cheaper to produce.

To be sure, fossil fuels still dominate energy production, especially as the hydraulic fracturing (“fracking”) revolution in North America continues apace. But the world is also in the midst of a solar energy boom.

According to the solar industry’s current rate of growth, a new solar unit is installed in the US every four minutes. Since 2008, the country’s solar capacity has doubled. Cumulative solar electric capacity in the US now exceeds 9,370 megawatts (MW), sufficient to power more than 1.5 million American homes.

Globally, solar power consumption increased by 58 percent in 2012, to 93 terawatt-hours. A simiilar rate of year-over-year growth is expected for 2013.

Meanwhile, the average price of a solar panel has declined by 60 percent since 2011—and technological advances are pushing costs continually lower.

The latest statistics provide striking evidence that solar is not only here to stay but on the ascendancy. Two companies are well positioned to benefit: Canadian Solar (NASDAQ: CSIQ), a small-cap stock that’s more suitable for aggressive investors, and SunPower (NASDAQ: SPWR), a larger and safer play that’s nonetheless poised for market-beating growth.

According to a report released in late September by the Solar Energy Industries Association (SEIA) and GTM Research, the second quarter of 2013 was photovoltaic (PV) solar power’s second best ever, with 832 MW of capacity installed between April and June.

The second-quarter data, compiled in the SEIA/GTM quarterly “US Solar Market Insight Report,” show a steady upward trend in the use of PV solar. This growth occurred despite the vicissitudes of government policy, whereby Washington, DC and the states continually tinker with the industry’s tax credits and subsidies.

The report should quell investor doubts about the industry’s long-term viability (see Chart A below).

Chart A: Here Comes The Sun

US Photovoltaic Installations (in Megawatts) by Market Segment, First Quarter 2010 to Second Quarter 2013. 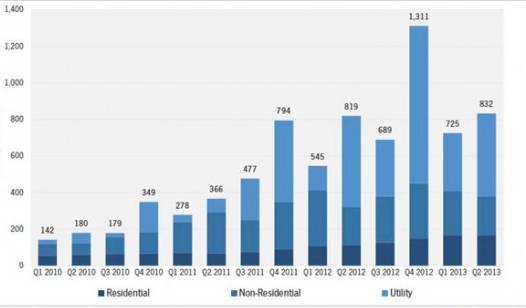 According to the SEIA/GTM report, the overall solar electric market remains on track for another record year, with 4,400 MW of PV and over 900 MW of concentrating solar power projected to come online in 2013.

Admittedly, the number of non-residential installations (solar PV for businesses) shrank 11 percent from last quarter, but that was largely due to a temporary setback in the form of regulatory uncertainty in certain states such as Massachusetts. Non-residential US growth in the second half of 2013 is projected to climb higher, as the Bay State and other states that are typically friendly to the solar industry sort out their rules.

According to the SEIA/GTM report, the big driver of growth for the second quarter was utility-scale solar PV projects. Utilities installed 452 MWs—an increase of 42 percent compared to the first quarter of 2013. A total of 38 utility projects were completed in the second quarter, with the 10 largest spread among the sun-splashed states of California and Arizona.

Another 4.1 gigawatts (GW) worth of utility projects are under construction, plus another 8 GW worth of signed power purchase agreements for future projects.

An ostensible cloud hanging over solar power’s otherwise bright future is US federal budget “sequestration,” which implemented cutbacks in government incentives for the solar industry. However, it’s noteworthy that solar installations continued to proliferate in the second quarter, despite curtailments in government assistance.

The utility sector’s rapid adoption of solar is expected to continue for the rest of this year and beyond, providing a multiyear boost for the solar PV market.

What’s more, in a major legislative victory this month for solar power, the California State Senate and State Assembly approved four solar-related bills that Governor Jerry Brown is expected to sign into law.

The bills comprise a complex package of incentives and regulations that will facilitate the continued expansion of solar generation in California. A central provision sustains so-called “net metering,” which allows renewable energy customers to sell their excess power back to the grid at retail prices.

The Golden State already ranks number one in the US in total installed solar capacity, with 3,761 MW. Net metering has proven a boon for residential rooftop solar installations around the country—and it could also pose a long-term threat to utilities.

Another threat to conventional power generation is solar’s ever-cheaper cost. Throughout the US, the average cost of a completed PV system dropped by 11 percent year-over-year in the second quarter to $3.05/W (see Chart B below). 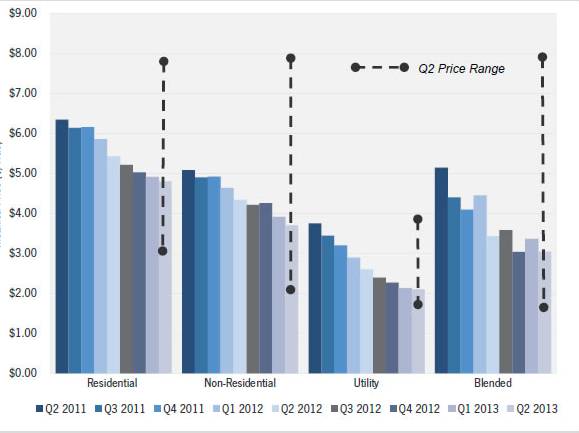 From China to Canada

The above trends have lifted the stock of Canadian Solar (see below). 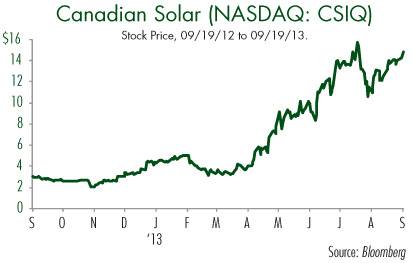 Most of Canadian Solar’s manufacturing facilities are based in China, but the company is officially headquartered in Ontario, Canada, a dual presence that reaps low-cost manufacturing but also obviates some of the hassles of investing in a China-based company.

Canadian Solar has several ambitious projects in the works, focusing on growth opportunities in emerging markets such as Japan. Notably, Canadian Solar recently inked a deal with Grand Renewable Solar LP for the construction of a 130 MW utility-scale solar power plant in Ontario that’s expected to generate revenue of over C$310 million ($301.1 million).

On the European Continent, Germany is a particularly promising source of future demand for the company. In the traumatic aftermath of the Fukushima nuclear disaster in Japan, German Chancellor Angela Merkel announced a plan to shut down all of the country’s nuclear power plants by 2022 and convert almost completely to solar and wind power by 2050.

On a sequential basis, second-quarter revenue increased more than 44 percent and module shipments jumped 34 percent. For the third quarter, Canadian Solar expects module shipments in the range of 410 to 430 MW. For the full year, the company estimates that shipments will come in at 1,600 to 1,800 MW, with Japan accounting for up to 40 percent.

With a market cap of $2.87 billion, SunPower is the number two player in the PV solar panel business, behind larger First Solar (NASDAQ: FSLR). Here’s why SunPower is a better play.

SunPower’s specialty is the design and installation of large, super-efficient panel arrays, which are in great demand in China, the Middle East and Japan. The company focuses on utility-scale solar power plants because they entail not just solar panel manufacturing but also high-margin engineering, integration and construction services.

This holistic approach allows SunPower to distinguish itself from simply being a maker of solar components, which are increasingly becoming commoditized.

The company also is benefitting from speculation that General Electric (NYSE: GE), the company that electrified America in the late 19th century, is contemplating First Solar as a takeover target. Any acquisition of First Solar would make SunPower the largest independent public company left in the industry.

As my colleague Tom Scarlett wrote in a May 28 Investing Daily article, the stars are increasingly in alignment for SunPower. The stock’s price has reflected the company’s improving prospects (see below). 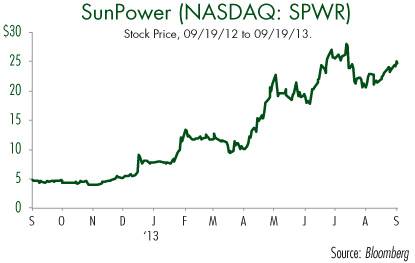 So far this year, SunPower has booked $100 million in North American commercial projects; inked a supply agreement totaling more than 25 MW for a power plant in Japan; and booked residential projects in Europe roughly worth 60 MV.

SunPower’s second-quarter revenue came in at $576.5 million, a drop from revenue of $635.4 million in the same quarter a year ago. But second-quarter earnings were strong, coming in at $19.6 million, compared to a loss of $84.2 in the same year-ago quarter.

This larger and well-established solar company is a growth play on the industry, without the risks of its smaller and more volatile peers. As the solar industry continues to consolidate, SunPower is likely to remain the most powerful survivor.