A number of readers have recently requested my near- and longer-term outlooks for the energy markets. Let’s first review how changing oil and gas prices have affected various sectors over the past year.

A year ago, West Texas Intermediate (WTI) was trading at $91.35 a barrel (bbl), while Brent crude was $110.35/bbl. That $19/bbl spread was a boon for oil refiners who could buy crude oil at prices based on WTI and sell finished products at prices tied to Brent. It was also a boon to railroads whose customers were happy to pay $10-$15/bbl to have oil shipped from North Dakota to the East or West Coast, where the delivered cost was still lower than for waterborne crudes like Brent.

Today WTI is trading at $103.38/bbl and Brent is at $108.85, for a Brent-WTI differential of $5.47/bbl. At that level, the windfall that refiners were enjoying a year ago is gone, and it is no longer economical to rail crude oil across the country. So the lower differential hurts both refiners and the railroads.

We had warned that the differential would begin to disappear this year as new pipeline capacity promised to alleviate the bottleneck in Cushing, OK that was depressing mid-continent oil prices. Cushing inventories began to drop rapidly in early July, and have now fallen to levels last seen in February 2012. As long as Cushing’s crude inventories continue to drop it will help keep the WTI-Brent differential in check, but further mid-continent production increases could start to slow or reverse the inventory drop. 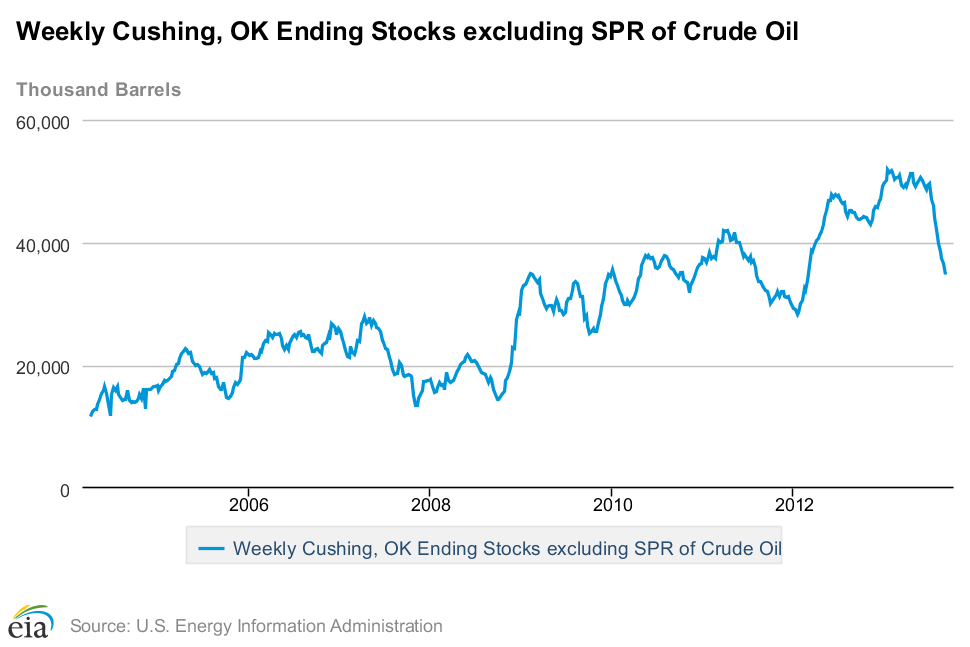 However, the particulars of how the Brent-WTI spread disappeared are important. Brent crude is still pretty close to the price of a year ago, while WTI has made a strong upward move. Thus, business remains good for oil producers selling waterborne crudes tied to Brent, while the picture has improved remarkably for those selling US crudes pegged off the WTI.

As a result, EOG Resources (NYSE: EOG), the largest oil producer in the Eagle Ford Shale in Texas, saw its share price climb by 55 percent over the past 12 months. Oasis Petroleum (NYSE: OAS), a pure play on the Bakken in North Dakota, registered a 74 percent increase in its share price. Impressive gains extended to domestic oil producers across the board. If you were in this space, you probably made money.

Natural gas has recovered nicely as well from a year ago, when prices bottomed out below $2 per thousand British thermal units (MMBtu). With the front-month contract for natural gas now hovering near $3.50/MMBtu, natural gas producers are in the same boat as the oil producers. Chesapeake Energy (NYSE: CHK), the nation’s second leading gas producer, has seen its share price climb 36 percent over the past year.

Of course what readers really want to know is what happens next. I think we can make a few predictions.

The first is that oil prices are likely to drift a bit lower from here. Of course short-term catalysts can literally appear overnight, but at the moment there are no obvious short-term catalysts that might drive up prices. Further, US crude oil inventories are near the top end of their five-year average. It would not surprise me to see WTI test the lower $90s or upper $80s during the fourth quarter. 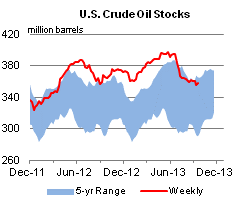 The longer-term catalysts are still in place to justify oil companies as a long-term investment, but you’re likely to find cheaper entry points for most US oil producers during the coming quarter.

Likewise, I don’t see much evidence that over the short term the Brent-WTI differential will rebound above $10/bbl. If this were to happen refiners would once again be attractive, and at $15/bbl the railroads would look pretty good. For now, I don’t expect conditions to improve much for refiners for one or two quarters, but the downside risk at this point looks pretty low. You might be a bit early to buy a refiner now, with the possibility of having to wait out a disappointing quarter or two.

The best looking investment for a longer-term investor has to be the natural gas producers. The fourth LNG export license was recently approved by the Department of Energy, and first mover Cheniere Energy (NYSE: LNG) is expected to begin shipping to customers in Europe and Asia by the fourth quarter of 2015.

Another positive catalyst may be the recently published EPA draft regulations that would make it uneconomical to build a new coal-fired power plant. Natural gas plants easily meet the proposed regulations, hence demand may continue to increase from the power sector.

Again, you might be a little early, but I like the domestic natural gas producers as one of the more attractive long-term investment opportunities out there.

As for coal and nuclear power, the outlook is still too negative to broadly recommend either sector. There may be some special situations in both, and there will undoubtedly be occasional rallies, but given the way the political winds are blowing these sectors don’t presently have much going for them.