Falling in Love With Butane

Fall is always a welcome change of pace for most people after a long, hot summer. It brings relief not only from the temperatures, but at the gasoline pump as well. Pundits frequently notice this phenomenon during election years, and assume that vested interests are trying to manipulate prices to win elections. But there is a more straightforward explanation to what’s going on, and it can benefit consumers, LNG producers, and sometimes refiners.

Everyone knows that gasoline evaporates. What you may not know is that there are numerous recipes for gasoline, and depending on the ingredients the gasoline can evaporate at very different rates. And because gasoline vapors contribute to smog, the EPA seasonally regulates gasoline blends to minimize gasoline vapors.

The same phenomenon applies to gasoline. As the temperature increases, the vapor pressure rises. Thus, in summer it is important to keep the RVP of gasoline at a lower level than in winter. The specific limit varies from state to state (and tends to be more restrictive in congested areas and warmer locations), but 7.8 psi is a common RVP limit in much of the US in the summer months. When a gasoline blender produces gasoline, it must be tested and it must be below the RVP limit for the month it is to be sold in.

In September, the RVP specifications begin to be phased back to cold weather blends which can have an RVP as high as 15 psi in some locations. This has a big effect on the cost of producing gasoline. The reason for this is butane.

Butane has an RVP of 52 psi, which means pure butane is a gas at normal pressures and temperatures. But it can be blended into gasoline, and its fractional contribution to the blend roughly determines its fractional contribution to the overall vapor pressure. As long as the total blend does not exceed normal atmospheric pressure (again, ~14.7 psi) butane can exist as a liquid in a gasoline blend.

Why do we care about blending butane? Because it is abundant and cheap. Butane can routinely trade at a $1/gallon discount to crude oil or gasoline. Butane is a component of natural gas liquids (NGLs), which are condensed out during natural gas processing. Given the huge expansion of natural gas production in the US, it should come as no surprise that NGL production is also on the rise. (Butane is also a byproduct of oil refining.) 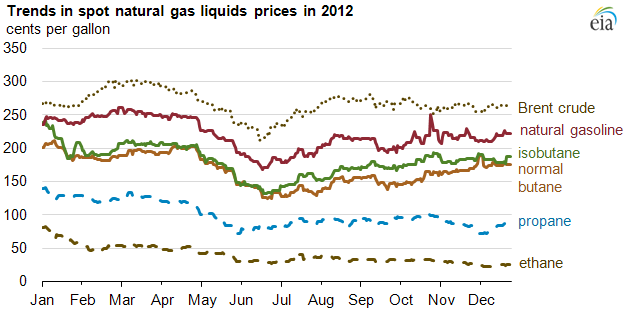 Thus, butane lowers the cost of producing gasoline in the “winter” blends. Not only is it cheaper, but because butane can be blended at higher levels after Sept. 15, the gasoline supply increases. For example, in the summer a gasoline blend might only contain 2 percent butane. In the fall, that gasoline blend might contain 10 or 12 percent butane, which can reduce the cost of production by a dime a gallon — and further reduce the price because gasoline supplies have increased by 10 percent thanks to the inclusion of butane.

This transition takes place after the high demand summer driving season has passed. Hence, supplies increase and cost less to produce just as demand falls. This perfect storm takes place every fall, and will generally drive down the cost of gasoline for consumers.

Beyond consumers, this seasonal increase in butane demand is a temporary boon for NGL producers who have suffered from low prices in recent years. Refiners may also benefit, but this is a more complex dynamic. Their costs for producing gasoline are lower, but the increase in supplies also increases competition, which may force them to pass on all of the savings to consumers.

Sometimes other factors can trump seasonal trends. In 2005, another perfect storm called Hurricane Katrina caused more than enough problems to trump the normal season effect of falling prices. Occasionally hurricanes or geopolitical events will have a big enough effect on oil prices that the seasonal effect is diminished or eliminated.

But more often than not, falling leaves are accompanied by falling gasoline prices, and now you know why. Enjoy it while you can, though. Spring always brings an end to this perfect storm when the RVP specification steps back down on May 1 — increasing costs and decreasing supplies just in time for the start of the summer driving season.