The Permanent Rise of Temporary Labor

In the bygone workplace of mid-century America, a corporate manager in need of a temporary secretary would issue the edict: “Get me a Kelly girl.” Today’s Internet-driven economy is producing a much wider array of temporary staffing jobs, regardless of gender.

As the staffing industry booms around the world, one company stands out as the best long-term investment play: Kelly Services (NASDAQ: KELYA), a pioneer in the field whose name is synonymous with “temps.” Not only does Kelly face more promising growth prospects than its peers, but its stock is undervalued as well.

With a market cap of $748 million, Kelly provides temporary staffing for a variety of industries. Kelly has more than 8,100 full-time employees, with more than 530,000 workers at any given time under its placement around the world.

Founded by William Russell Kelly in 1946, the company got its start by placing temporary clerical and secretarial workers who were invariably female—hence the term “Kelly girl,” which gained wide currency and entered modern folklore.

In 1966, the company changed its name from Kelly Girl Service to Kelly Services, to reflect the growing range of professions under its banner and an office culture that was evolving away from the sensibilities of TV’s “Mad Men.”

Temporary workers are in growing demand as companies seek labor flexibility and hedge their bets during an economic recovery that’s uneven and vulnerable.

Political unpredictability in Washington, DC makes temp agencies such as Kelly all the more appealing to employers that need to beef-up during the recovery but are reluctant to make firmer hiring commitments. The recent federal government shutdown is the latest example of lawmakers hindering economic expansion.

Anxiety over Obamacare’s health insurance requirements also is motivating many companies, especially smaller ones, to perform an end-run around the health reform law by resorting to temporary staffers. Temps sometimes get health insurance but usually that expensive privilege is only bestowed on full timers.

According to data from the consultancy Staffing Industry Analysts and other industry sources, the annual revenue of the global temporary staffing industry is about $339 billion. The US is the largest market, accounting for about 27 percent of total worldwide revenue. Revenue for the US staffing industry is projected to reach $139.4 billion in 2014, an increase of 6 percent over 2013.

According to the US Bureau of Labor Statistics, temporary workers made up 70.6 percent of the nation’s new jobs generated so far in 2013, compared to 29.4 percent for full-time jobs: 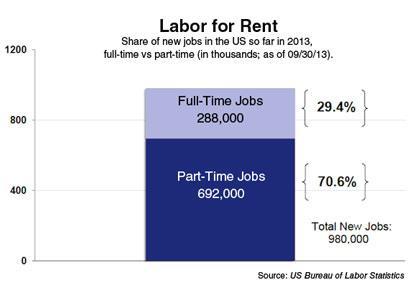 The average duration of employment with a staffing firm currently amounts to about 12 weeks. Temps also tend to work fewer than 35 hours a week, defined by economists as part-time employment.

Since the Great Recession ended in June 2009, the number of temporary workers in the US has soared more than 50 percent to nearly 2.7 million, the highest number on record.

During that four-year time period, the US added 913,200 temporary workers, a category that accounted for about 19 percent of all new jobs by the end of 2012: 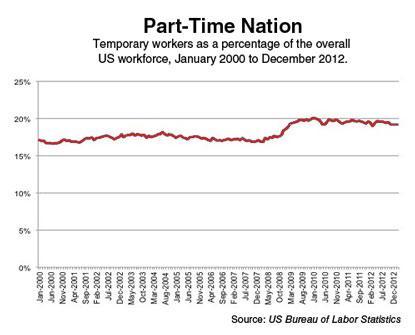 The economic logic for using these “free agents” is inescapable, if not ruthless. It’s costly to hire and fire high-quality workers. Rather than resort to layoffs of entrenched full-timers when the economy stumbles, it’s more efficient to prepare ahead of time by relying on temps.

But the worldwide labor market also is undergoing a structural change, whereby those temps are becoming more permanent.

Typically during recessions, there’s a jump in the number of part-time jobs and these jobs fall off as the economy recovers. This time around, though, temporary employment is remaining persistently high despite improving economic conditions.

Ordinarily during a recovery, employers who need additional workers are confident enough to take on new full-timers. However, employer resolve these days is being weakened by a host of worries, including civil strife in the Middle East, rising interest rates, imminent Federal Reserve tightening, and bloody budgetary battles in Washington. These anxieties help explain why the unprecedented boom in temp hiring is more resilient than in previous cycles.

The upshot: Businesses are increasingly regarding labor as just another variable cost that can be quickly cut when products and services are in low demand.

Even value-added, highly skilled jobs are increasingly outsourced to developing nations where educated professionals are willing to work for less than their counterparts in developed nations. Admittedly, these factors are contributing to worker insecurity, but the shift to temps is inexorable.

Kelly competes against a field of mostly bigger competitors, but the company stands out for its smaller size, bargain valuation and lower operating costs, all of which give it greater room for growth. These advantages have propelled Kelly’s stock price over the past 12 months: 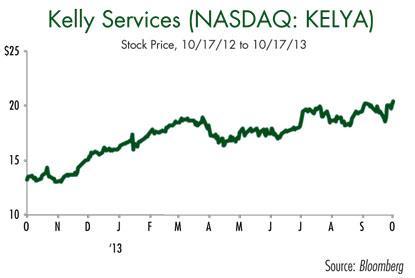 Another competitive advantage for Kelly is the company’s specialty in the creative services sector, which is increasingly the domain of younger and more mobile people with freshly minted college degrees.

In today’s fiber-optically connected “virtual” workplace, highly skilled employees insist on greater freedom of movement. Kelly has carved out a niche among this creative class, many of whom actually prefer temporary work that entails fewer entanglements.

To be sure, information technology is the granddaddy of outsourced staffing functions and it continues to provide Kelly with huge opportunities for growth, because of the ready ability to reap savings and streamline operations that are digital in nature.

Health care is another growth driver for Kelly. Obamacare’s requirement for more Americans to receive primary care coverage, combined with a graying population, will boost the need for temporary health care workers. At the same time, government cost restrictions will create an imperative for health providers to keep payroll and other overhead as low as possible.

Kelly is expanding its already extensive presence in emerging markets, which have shaken off their recent decline and should provide the company with long-term tailwinds. The company is especially focusing on China and Brazil, as growing ranks of well-educated professionals in those countries seek flexible employment with large multinationals that are based in developed countries.

Kelly’s most recent operating results took a mild hit, mostly from sluggish conditions in Europe. However, now that the euro zone is officially out of recession, this headwind should dissipate.

Kelly sports a trailing 12-month price-to-earnings (P/E) ratio of 15.8, a bargain compared to its industry of staffing and outsourcing services, which has a trailing P/E of 26.6. Moreover, the company boasts a strong balance sheet with almost no debt.

Kelly Services is in a prime spot to benefit, as temporary employment becomes a permanent way of life for millions of job-hungry applicants around the globe.