I spent the past week in the heart of the Athabasca oil sands in Fort McMurray, Alberta. I was there as a guest of the Canadian government, which hosts annual tours for small groups of journalists and energy analysts. The trip was incredibly informative, and helped me gain a much deeper understanding of what’s happening in Alberta’s oil sands.

In today’s Energy Letter, I want to provide readers with a general overview of the situation in Alberta. In this week’s Energy Strategist I will specifically discuss two companies that I visited on this trip — Cenovus Energy (NYSE: CVE, TSE:CVE) and Canadian Natural Resources (NYSE: CNQ, TSE: CNQ). In next week’s Energy Letter I will discuss some of the logistical issues involved in getting the oil sands crude to market.

Alberta has a population of 4 million people, and is Canada’s primary oil- and gas-producing province. Alberta’s economy is highly dependent on oil and gas. It’s situated next to its more liberal neighbor British Columbia, which is a bit like having Texas border California.

Canada has the third-largest oil reserves in the world — more than Iran or Iraq. Of the 173 billion barrels of Canadian reserves, 169 billion barrels are from oil sands, which are a mixture of sand, clay, water and bitumen — a very heavy oil.

Of the world’s oil reserves, 80 percent are state-owned or controlled. Only 20 percent of global reserves are accessible to independent oil and gas companies, and half of those are in Canada’s oil sands.

Alberta’s oil production has been growing by about 170,000 bpd each year, and a production increase of about 1.8 million bpd is forecast by 2022. There is some shale gas and tight oil in the central and southern part of the province, away from where oil sands are located. There have not been any forecasts made on future tight oil production in the province, as it is still at a pre-commercial stage.

Alberta’s goal is to be in the top quartile for conditions favorable for investing in the oil and gas industry, and to grow oil sands from its current market share of 2.1 percent of global oil consumption. Canada’s oil sands saw $25 billion (Canadian) of investment in 2012, versus $20 billion for conventional oil and gas. Historically most of the investment has originated from Canada, the US and Europe, but investments from Asia have increased substantially in recent years. Foreign countries with investments in Alberta’s oil sands include China, Japan, Korea, Thailand, Norway, France, UK and the Netherlands. 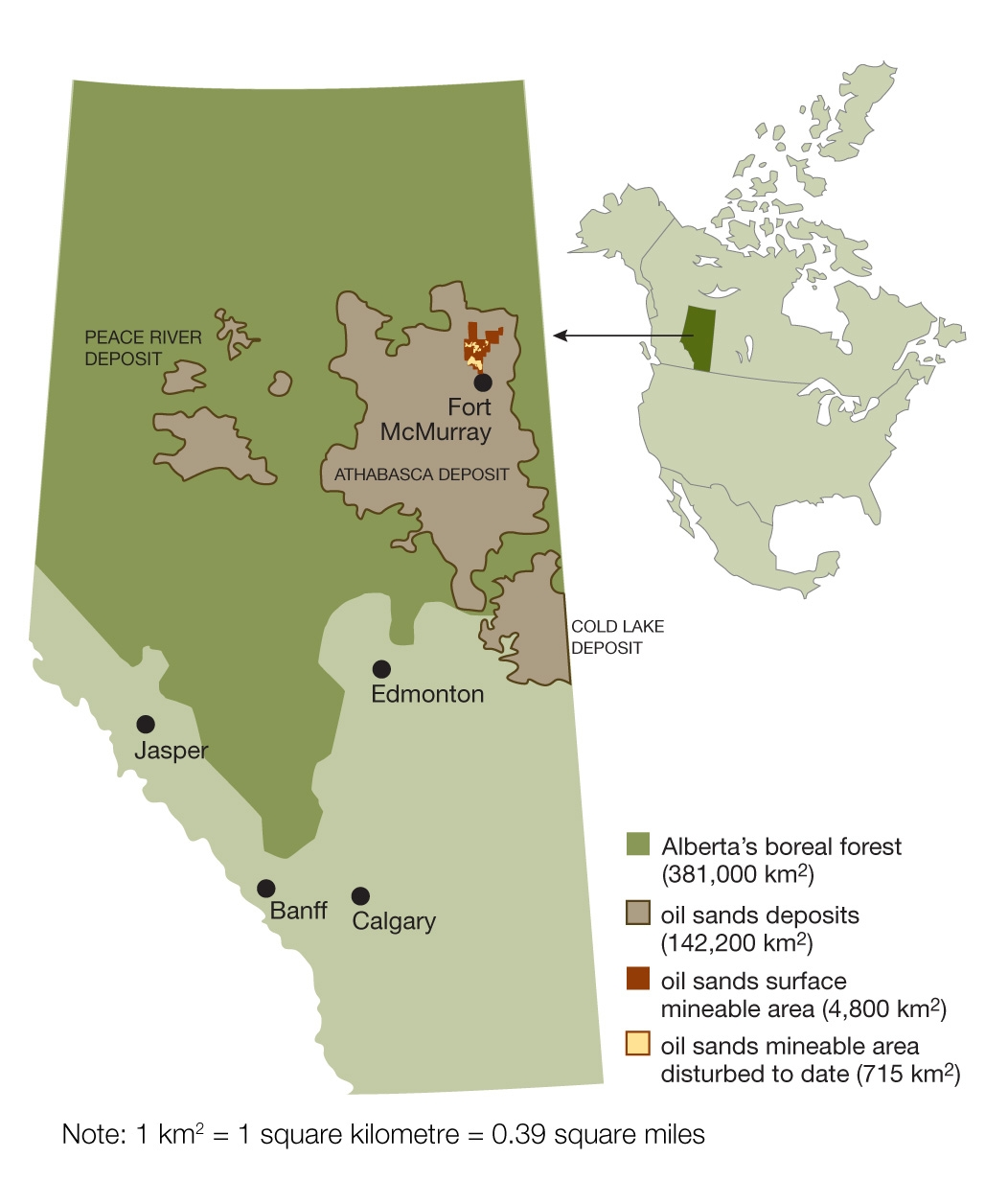 Most of the oil sands production thus far has come from surface mining, and this is the technique that has attracted the most environmental criticism. Surface mining is feasible when the oil sands are relatively close to the surface. In order to produce oil sands from surface mines, any harvestable timber is sold and the overburden — which consists of 30 to 40 meters of peat, clay and sand — is removed and set aside for future reclamation. The oil sands are then removed from the open pit and placed in dump trucks capable of carrying loads of 400 short tons. The trucks themselves weigh 250 tons, so a fully-loaded truck weighs 1.3 million pounds. 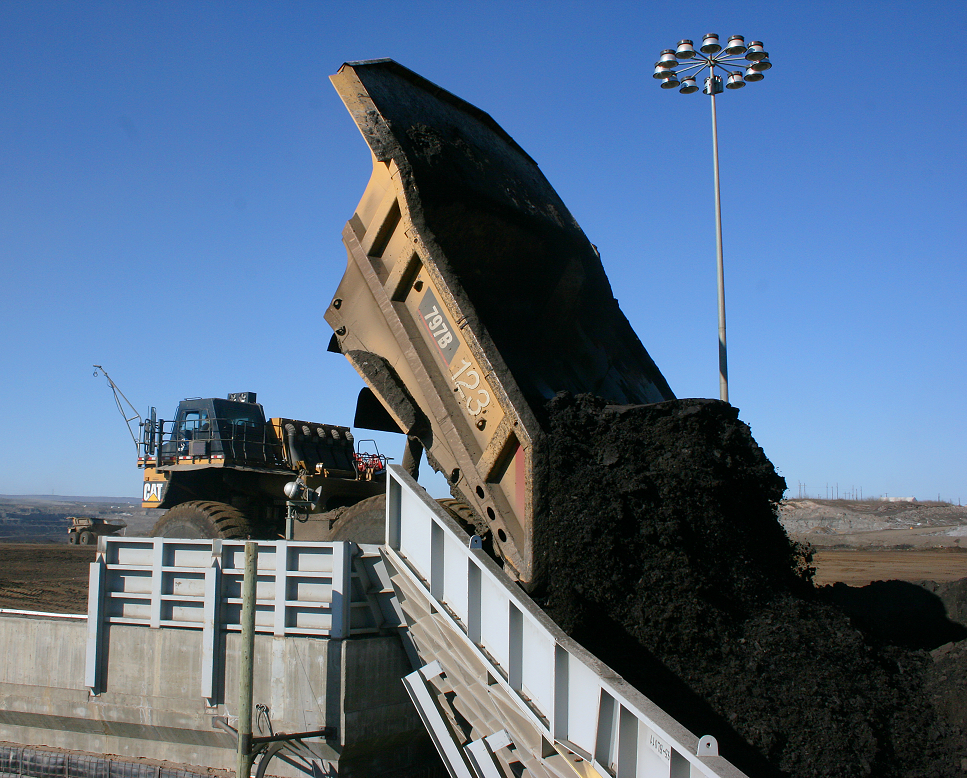 The trucks transport the ore to a processing facility where it is dropped into a crusher, mixed with hot water, and then piped to the plant. The mixture is put into large separation vessels where the bitumen is removed in the top layer, and the bottom layer of sand and some residual bitumen is sent to the infamous tailings ponds where it will eventually be buried, before the land above the tailings pond is reclaimed. The recovery rate for bitumen from surface mines is over 90 percent. 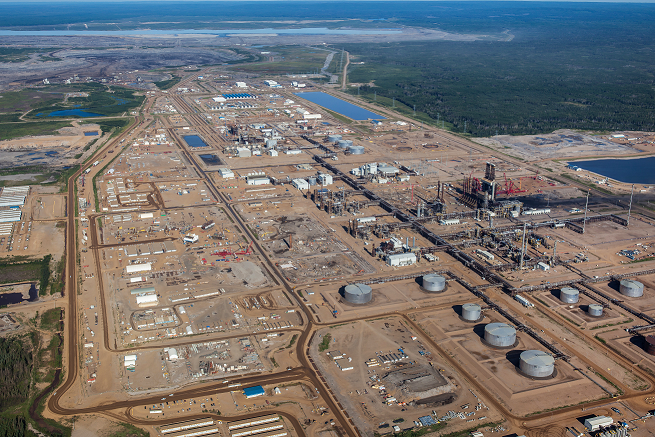 Bitumen recovered from oil sands can be upgraded through various processes to a lighter oil (syncrude), as well as to products such as naphtha, diesel, and gas oil. Alternatively, the bitumen can be mixed with a diluent like naphtha to form dilbit, which can then be transported by pipeline or rail. (Unheated bitumen has a consistency like tar, and has to be upgraded, diluted, or heated to flow).But the overwhelming preponderance of future oil sands growth is expected to come from in situ (Latin for “in position”) production. As of January 2013 there were 127 operating oil sands projects in Alberta, and only 5 were mining projects. Production from both methods is expected to continue to grow, but the vast majority of the oil sands resource is too deep to be mined. Thus, most of the future opportunities will be through in situ production. 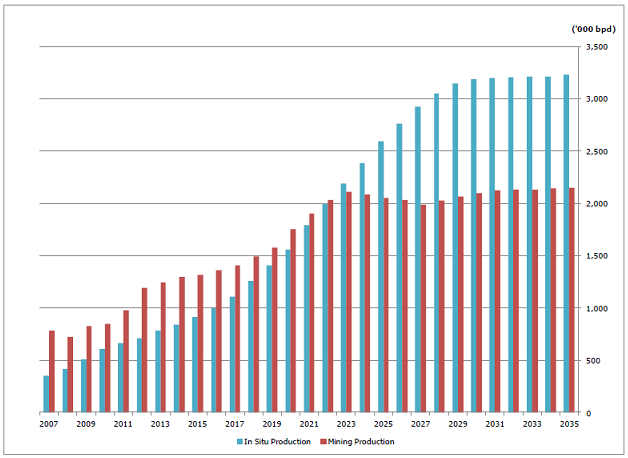 In situ production involves injecting steam into the ground to enable the oil to flow freely. The oil is then pumped to the processing facility. In situ production has the advantage of a much smaller surface footprint, since it doesn’t require the removal of overburden from the surface above the deposit. Nor does it require extensive tailings ponds.

There are two primary methods of in situ bitumen production. Cyclic Steam Stimulation (CSS), or the “huff-and-puff” method, was first used commercially in Alberta by Imperial Oil at Cold Lake in 1985. This technique involves the injection of steam into the formation for a period of time, followed by an extraction period in which the oil is pumped out. When the oil flow slows to a certain point, steam is once more injected. This cycle continues until the well is no longer economical.

The other in situ method is called steam assisted gravity drainage (SAGD), and it was enabled by the same horizontal drilling breakthroughs that enabled the hydraulic fracking revolution. SAGD was first commercialized in 2001 by Cenovus at Foster Creek, and it was the single biggest reason that Canada’s oil reserves more than quadrupled in the past 20 years. Once a technique makes it both technically viable and economical to produce a resource, it can be placed in the reserves category. Again, this is a similar situation to fracking, where resources in places like the Bakken and Eagle Ford became reserves when fracking made them economical to produce.

SAGD involves drilling a pair of horizontal wells, one about 5 meters above the other. Steam is injected into the upper well for months to heat up the bitumen. I learned from Cenovus that its initial projects required the company to inject steam for 18 months before producing oil, but as the engineers progressed up the learning curve the timing has been reduced to three months of steam injection. Once the wells start to produce, they have tended to produce almost without depletion for 10 years (a situation very unlike fracking, where wells initially deplete rapidly).

The horizontal wells can be drilled for miles in many directions from a single well pad, and as a result a large land area can be accessed without a huge environmental impact on the surface. A well pad such as the one I visited below can produce nearly 20,000 bpd of bitumen for 10 years before depletion begins to curtail production. 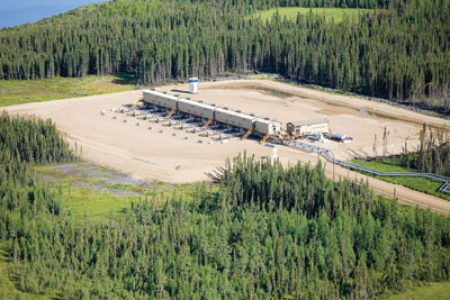 There are certainly environmental issues to be managed, and I discussed some of them in detail in another column. (For those interested in the environmental concerns, see my article Oil Sands and the Environment). Nevertheless, based on what I saw on my trip, oil sands production growth is poised to remain high unless oil prices collapse. SAGD will lead the way, but production via surface mining is also expected to remain strong for the next two decades.

In this week’s Energy Strategist I will take an in-depth look at the two companies that I visited on this trip — Cenovus Energy and Canadian Natural Resources Limited — and delve into their production costs and overall outlook. In next week’s Energy Letter, I will examine the logistical issues of getting the oil sands to market, including the impact of the Keystone XL decision (regardless of which way it goes).