How to Turn Disaster Into Profit

You don’t have to be a tree-hugging, Birkenstock-wearing, granola-eating hippie to value environmentalism. Investors can reap outsized profits from companies that are dedicated to global ecology.

Environmental, social and governance (ESG) factors are gaining prominence in the strategic decisions of Wall Street and corporations. Not because financial and corporate leaders have suddenly become saints, but because ESG is good for the bottom line.

Consider BlackRock (NYSE: BLK), the world’s largest asset manager. With more than $9.5 trillion in assets under management, BlackRock recently launched several new exchange-traded funds (ETFs) that track ESG-focused companies. No one ever accused the top managers at BlackRock of being sentimental bleeding hearts.

A company’s ESG score has emerged as a major evaluation metric with the public, financial analysts, and investors. Research shows that ESG practices actually enhance efficiency and profitability.

Those challenges are only getting worse.

According to a Statista report released January 7, natural disasters in 2021 generated economic losses of $283 billion, only 38% of which was covered by insurance. Take a look at the following chart: 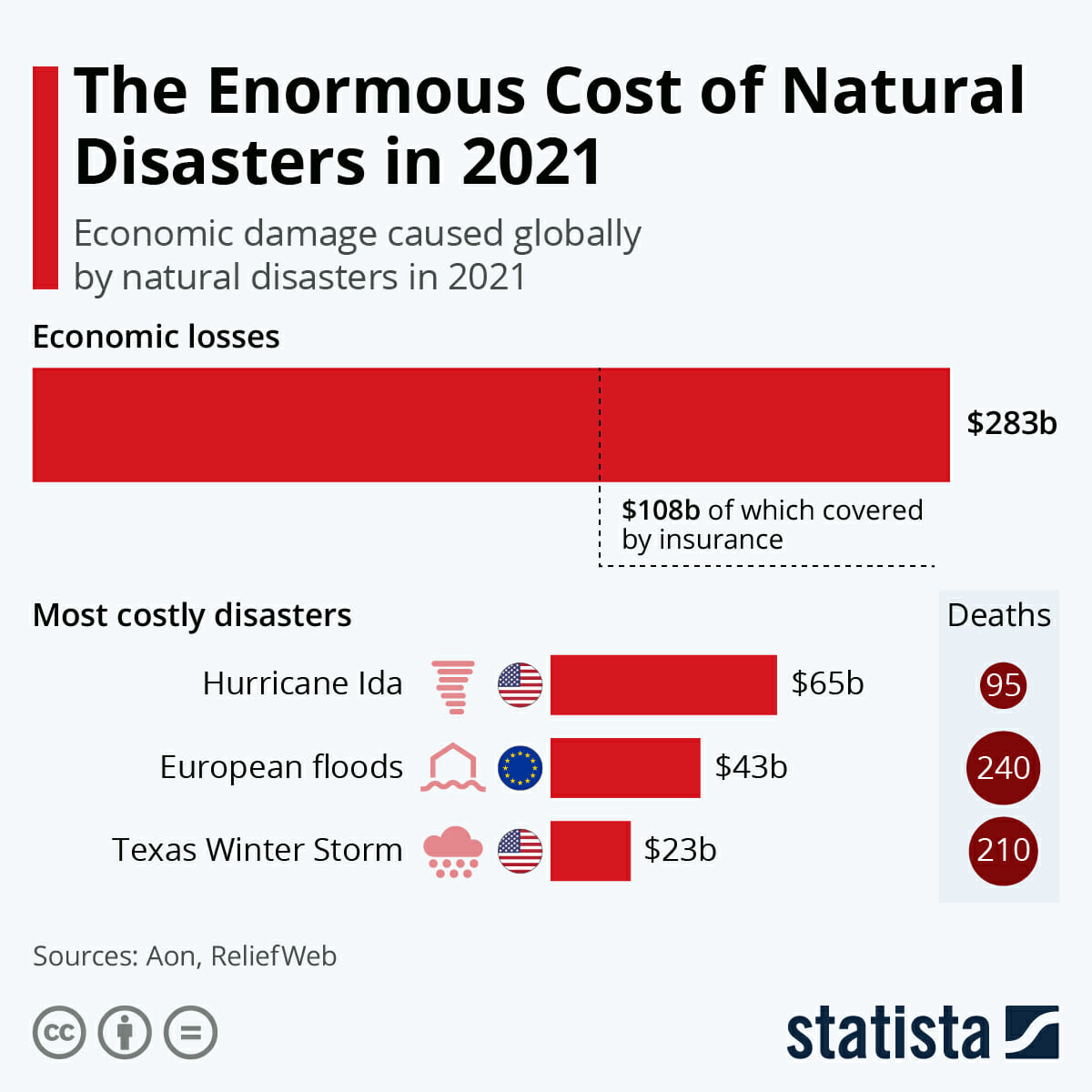 As environmental disasters grow in frequency and intensity around the world, Tetra Tech is the “go-to” environmental company. (Click here for Tetra Tech’s latest ESG goals and report card.)

Headquartered in Pasadena, California, Tetra Tech’s services are sought by commercial and governmental decision-makers who find themselves on the front lines of crisis. Environmental and humanitarian catastrophes wrought by climate change (e.g., the rising incidence of droughts, wildfires and tornadoes) are vivid examples.

Whether the culprit for the emergence of freak “super storms” is man-made climate change or natural cycles, severe and unpredictable weather is a new global reality that governments appear helpless to prevent. That makes Tetra Tech the beneficiary of a secular trend.

The era of water scarcity…

Tetra Tech also is a play on the global water crisis, as pollution, overcrowding, urbanization, and the heightened frequency of droughts make potable water an increasingly scarce and valuable commodity. Unsafe water sources are responsible for 1.2 million preventable deaths around the world each year.

According to the consultancy Global Water Intelligence, there’s a huge gap in the U.S. between expected expenditures and actual needs for water infrastructure (see chart below, with years 2021-2040 as projections). 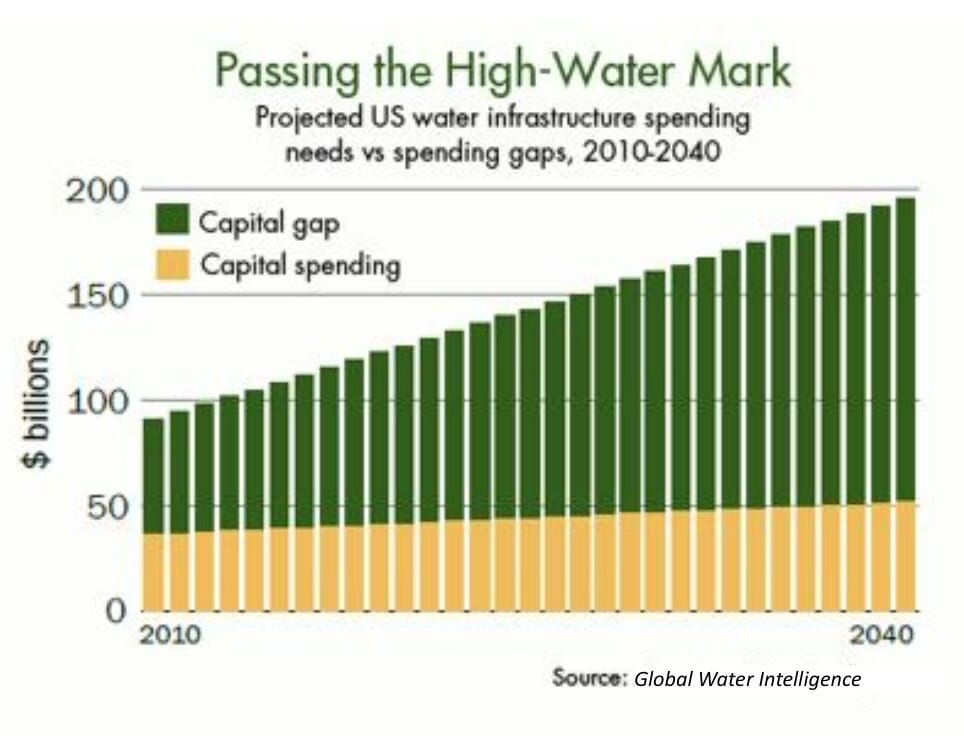 Infrastructure spending enjoys a bipartisan coalition of support, because it entails state and local spending that both red and blue states require.

It all adds up to huge, long-term demand for Tetra Tech’s highly specialized services. In the meantime, Tetra Tech continues to pick up lucrative contracts from federal and state agencies for environmental remediation.

With a market cap of $8.3 billion and several quarters of robust operating results under its belt, Tetra Tech possesses the financial wherewithal to aggressively compete in the construction bidding wars that typically emerge in the wake of natural disasters. It’s also poised to pick up a big slice of new infrastructure spending, in the U.S. and overseas.

Unlike its peers, Tetra Tech’s core competency is remediation and risk management, making it a purer play on these incidents as well as a company with more room for growth. By way of contrast, major competitor Fluor (NYSE: FLR) has fingers in many different types of construction projects.

What’s more, the world of environmental construction is governed by longstanding relationships. Through its already established presence in the corridors of Capitol Hill and various overseas outposts, Tetra Tech can leverage its proven track record to scoop up its share of contract spoils.

The consensus projection of analysts is for Tetra Tech’s share price to appreciate by nearly 30% over the next 12 months. As a provider of essential services, the company is buffered against economic cycles and market corrections. Yes, it’s possible to do well, by doing good.

Editor’s Note: I just showed you how to make money from eco-disasters (with a clean conscience). Meanwhile, financial threats are mounting, amid higher inflation and a more hawkish Federal Reserve.

Looking for a way to protect your portfolio under these uncertain conditions? Our investment team has devised a trading methodology that provides big gains but also mitigates current risks. Click here for details.

John Persinos is the editorial director of Investing Daily. Send questions and comments to: mailbag@investingdaily.com. To subscribe to his video channel, follow this link.