One of the criticisms of oil sands production is that the process requires too much energy. Some argue that these projects are a poor way to use energy, because the energy return on energy invested (EROEI) is ~ 3:1 (which would mean it takes 1 BTU of energy input to produce 3 BTUs of bitumen output). Most conventional oil, on the other hand, has an EROEI in the range of 10:1 to 20:1.

The concept of EROEI has sometimes been used to challenge the logic of certain energy projects. The production of bitumen from oil sands has been challenged on the basis of low EROEI. So is the production of oil sands ultimately doomed by a low energy return? Let’s investigate.

The concept of energy return on energy invested is greatly misunderstood. On the one hand some argue that EROEI doesn’t matter, only economics. This misses a key point: EROEI is going to affect the future of energy production, because it can be used to show that in order to maintain the current net energy for society, energy production must accelerate as EROEI declines. At low EROEI far more gross energy production is required to achieve the same net, as illustrated below: 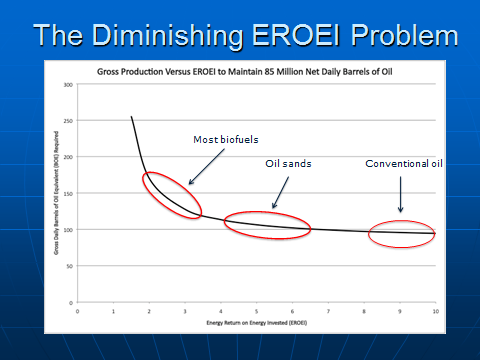 
But it is also true that companies don’t make project decisions on the basis of EROEI. What EROEI can tell us is the relative sustainability of the fossil fuel inputs to various projects, and it can be a useful tool of energy policy when comparing different processes. The lower the EROEI of a process, the lower the sustainability and the faster fossil fuel resources are depleted.


The important EROEI equation is EROEI = Energy Output/Energy Input. The “input” term concerns the energy that is actually consumed in producing the usable energy output. Some have incorrectly used “input” to refer to energy that is also an output (i.e., energy that wasn’t actually consumed in the process).  An example of this would be treating an entire barrel of oil as input, when what we are really concerned with is how much energy was consumed to refine the barrel.


The breakeven for EROEI is 1.0. In that case, the process has consumed just as much energy as it produced. In some cases, that may still make economic sense. For instance, if you input coal BTUs but output diesel BTUs (as in a gas-to-liquids project), then the coal was converted into something of greater value. However, if the input is a transportation fuel and the output is a transportation fuel, then from an energy policy point of view the relevant question for a low-EROEI process would be “Why not just use the inputs directly as a transportation fuel?”

Another major caveat is that there is no time factor included in EROEI calculations. Thus, it is possible for a lower EROEI process to be more attractive than a higher EROEI process if the former returns the energy over a shorter time interval. A process that returns 3 percent excess energy on a daily basis is better than one that returns 100 percent excess on an annual basis, even though the relative EROEIs are 1.03 to 1 and 2 to 1. Thus, when someone makes a blanket statement about an EROEI for a process, or between competing processes, a key question needs to be “Over what time interval is the EROEI calculated?” (I explained this in more detail in How Not to Use EROEI).

As discussed in Mining Black Gold in the Great White North, there are two primary ways of producing bitumen from oil sands. The first is steam assisted gravity drainage (SAGD). This process consists of:
When oil sands are produced via surface mining, the process consists of:
Two companies that I visited on my recent trip to the Athabasca region were Cenovus Energy (NYSE: CVE, TSE: CVE), which produces bitumen primarily via the SAGD process, and Canadian Natural Resources (NYSE: CNQ, TSE: CNQ), which primarily produces bitumen from surface mining. In the Athabasca region there is an abundance of cheap natural gas, which is consumed in these processes to produce much more valuable crude oil. 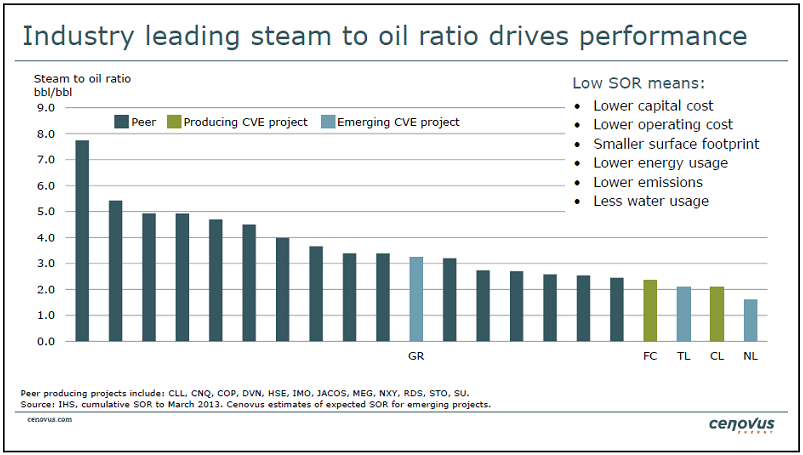 
So we can see that in this analysis of data collected by IHS CERA, the four lowest “steam to oil ratios” — a measure of the relative indication of how much energy is being used — are found in four Cenovus projects. FC, TL, CL, and NL are Foster Creek, Telephone Lake, Christina Lake, and Narrows Lake — all Cenovus projects or joint ventures. The Grand Rapids (GR) project in the middle of the pack is also a Cenovus project.


But how does a “steam to oil ratio” (SOR) translate to EROEI? I spent a lot of time going back and forth with Cenovus on this issue. To an engineer, a “barrel of steam” really has no absolute meaning, as energy content would vary with the temperature and pressure of the steam. So I asked for actual BTUs of energy to produce a barrel of steam, so that I could make relative comparisons. After several follow-up email exchanges and a phone call, here is what I was told by Brett Harris, a Cenovus spokesperson:


Unfortunately, I don’t have the electricity input for 2012. The last year for which I have fully calculated numbers was 2008. In 2008, at our Christina Lake operations, electricity and diesel accounted for about 5% of the total energy input to create a barrel of oil. Natural gas accounted for the remaining 95%. At the time, our all in energy ratio to produce a barrel of oil was about 1 to 6.3. (I believe that has improved since then, but I don’t have the electricity numbers to calculate a more recent all in number for you).”

So if I use their 2012 ratio of 840 cubic feet of natural gas to produce a barrel of oil, add another 5% to account for diesel and gasoline, I arrive at about 900,000 BTUs of energy to produce 5.8 million BTUs of oil. That results in an EROEI for Cenovus’ SAGD bitumen production of 6.4 to 1. The EROEI has been improving over time as they have learned what works well and what doesn’t, and it is approaching the lower range of conventional oil production.


But note in the graphic that while the SOR for most Cenovus projects is down in the 2 to 1 ratio (2.1 according to the graphic below), one of their peers uses a lot more energy at ~7.8 to 1 for the SOR. While the comparison isn’t perfect, because some companies may define a “barrel of steam” in slightly different ways, we can make a rough estimate of the EROEI for the industry laggards.


That means for the worst in class, the EROEI is only about 1.8 to 1 (5.8 million output for 3.3 million input). If these were fungible inputs and outputs — for example, if this company had to cannibalize some of their oil to produce the energy for the process — this wouldn’t likely be economically viable for that particular project. Perhaps their process is still economical with cheap natural gas inputs and oil outputs, but the very existence of this process means that those low-ball EROEIs regarding oil sands production have some truth to them.

While the one company with an SOR of ~7.8 is a clear outlier, there are a number of companies operating in the 4 to 5 range for SOR. Assuming an average of 4.5 for the SOR and repeating the earlier exercise, I arrive at an EROEI for these companies of 3 to 1. So it would appear that the vast majority of oil sands operators are operating in the 3 to 1 range. 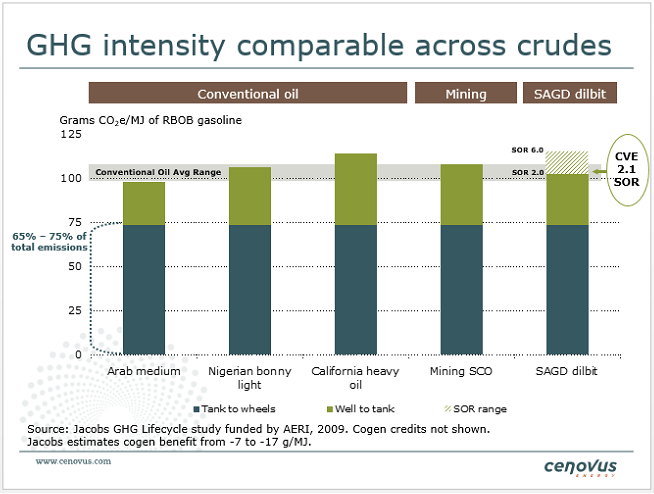 One other item of interest from that graphic is that it indicates that Cenovus’ bitumen production actually has a better energy return from well-to-tank than Nigerian light oil or California heavy oil. This would take into account the production, transport, and refining of the oil. Saudi Arabian medium crude has the lowest energy inputs on the graphic, indicating it has the highest EROEI. (Note that in the previous EROEI calculations, the refining step isn’t included; refining to finished products requires another 500,000 to 600,000 BTUs of energy input per barrel of finished product).

The next time you hear someone argue that oil sands production has a low energy return relative to other sources of oil, you will know that the truth is more complex. Across the industry there is great variation. While the industry average EROEI for oil sands production via in situ methods is indeed around 3 to 1, the very important caveat is that it is possible to have an EROEI of double that — as Cenovus has demonstrated. Further, some conventional sources of oil have a worse energy return than many sources of bitumen.