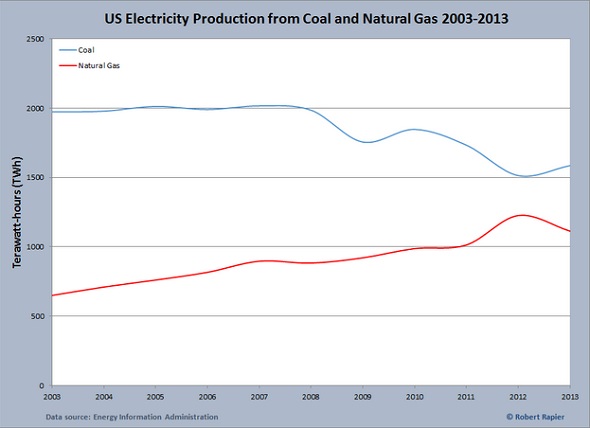 But note that coal gained a bit of market share back in 2013 as natural gas prices began to rise. Higher natural gas prices this year will likely swing the pendulum a bit more in coal’s direction (although the long-term trend for coal consumption in the US will still probably be down).

That brings me to the topic of today’s article: Despite its decline in popularity in the US, we still consume a lot of coal. Coal is forecast to continue to be the top source of US electricity until about 2035, at which point it will be overtaken by natural gas according to projections by the US Energy Information Administration (EIA). 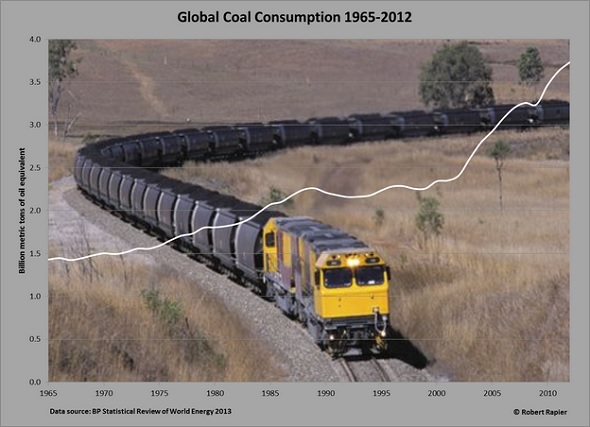 Coal in the US

Here in the US we have the world’s largest coal reserves. The US has 28 percent of the world’s coal reserves, enough to satisfy 257 years of US consumption at the current pace. As domestic coal consumption has declined, US coal exports are on the rise, reaching record levels in 2012. US coal producers are seeking to further expand coal export capacity from the Pacific Northwest to tap into Asia’s growing consumption.

The EIA projects continued growth in US coal exports, which will help ease the pain of declining domestic consumption. However, environmentalists are seeking to prevent more US coal from being exported, citing its high greenhouse gas emissions. Besides the challenge on the environmental front, Southeast Asia is also a very competitive market given the proximity of major coal exporters Australia and Indonesia. Australia is the world’s top coal exporter, with nearly 90 percent of its exports destined for Japan, China or South Korea.

The fortunes of US coal companies have declined along with US demand for coal. Major coal producers like Peabody Energy (NYSE: BTU) and Arch Coal (NYSE: ACI) have seen large declines in their market caps. But what about coal-oriented MLPs? How have they fared, and might an investor find value in that sector?

The annual return for each of the coal MLPs is reflected in the 2013 distribution trends. The two Alliances grew their distribution, and each showed a solid gain for the year. RNO held its distribution constant, and suffered a small loss in 2013. NRP shaved its distribution by more than a third, and saw its unit price decline by nearly that much.

At the bottom of the pile was Oxford Resource Partners, which had had to suspend cash distributions in early 2013 in response to continued weakness in the coal markets. OXF ended up as the worst performing MLP of 2013.

Some of the coal MLPs are still searching for a bottom, and some may not survive unless market conditions soon improve. The sector is often overlooked by MLP investors, but the challenging market conditions have created some potential values. While coal’s days as a growth industry are probably over in the US, the coal industry isn’t dead yet, nor will it be any time soon. Those who believe otherwise may be willing to sell you their coal MLP units at what will ultimately prove to be quite a bargain.