Get to Know an MLP: OCI Partners

This Tuesday I will be in in Washington DC at the 2014 Methanol Policy Forum. I will be presenting slides and participating on a panel called “Unlocking Our Vehicles to Methanol.” Notable speakers at the forum include former National Security Advisor Robert C. McFarlane, former Louisiana Senator and Senate Energy Committee Chairman J. Bennett Johnston, and former President of Shell Oil North America John Hofmeister.

Also speaking will be the leaders of some of the world’s leading methanol producers. Among them will be Egyptian billionaire Nassef Sawiris, the CEO of Orascom Construction Industries (OCI N.V.), a Netherlands-listed chemicals, fertilizer and construction conglomerate. OCI also happens to be the sponsor of OCI Partners (NYSE: OCIP), a master limited partnership (MLP) producing methanol and ammonia at a single plant on the Texas Gulf coast. The facility was mothballed in 2004 amid high natural gas prices, and restarted in 2012 by OCI N.V.

The Methanol and Ammonia Markets

Before discussing OCIP, a brief overview of methanol and ammonia is in order. These topics, along with a detailed look at OCIP and a specific recommendation, were covered by MLP Profits chief investment strategist Igor Greenwald in last month’s issue.

The global market fundamentals for methanol and ammonia have changed drastically since a wave of chemical plant closures in the US 15 years ago painfully consolidated both industries. Methanol is a petrochemical commodity used to make formaldehyde, adhesives, resins, solvents and transportation fuels. Methanol is once again in short supply and demand is growing, with prices escalating more than 25 percent over the last year.

Ammonia has received a big boost from the US mandate for expanded use of ethanol, since the primary use of ammonia is for nitrogen fertilizers used to grow corn. (See last September’s article The Sweet Smell of Decay for an overview of fertilizer MLPs).

The primary input and the main cost factor in the manufacture of both methanol and ammonia is natural gas. The surplus of cheap gas from new shale basins has given the surviving US chemicals producers a major cost advantage and spurred a wave of new construction projects that won’t crest for several more years.

Methanol demand is closely linked with global industrial production, which was on an upswing before the recent panic in emerging markets. Two-thirds of recent methanol output has gone into the production of formaldehyde and other basic petrochemical building blocks, with the rest used in energy-related applications.

Energy applications are becoming increasingly important growth drivers, especially in China, because blending methanol into gasoline can produce significant savings for refiners. Methanol can also be turned into a very clean-burning transportation fuel known as dimethyl-ether (DME), or used to economically replace crude-derived naphtha in the production of olefins, as has been happening increasingly in China. 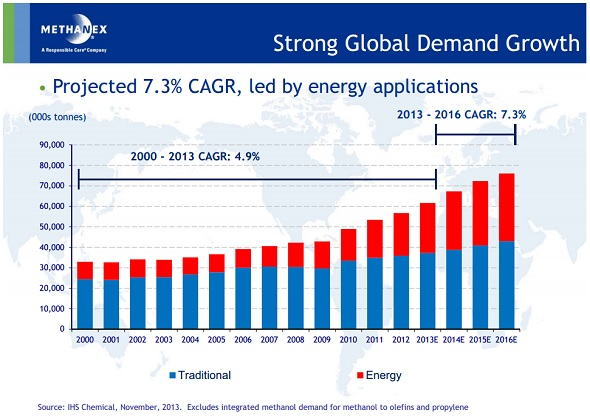 Global demand has compounded at a 5 percent annual rate since 2000 and some expect it to accelerate to 7 percent annually over the next three years. China accounts for more than 40 percent of global consumption as well as production, and its expensive methanol derived from coal has set a price floor for lower-cost producers elsewhere.

Production capacity is increasing too, of course, but is constrained by a shortage of cheap inputs in most overseas locations. Meanwhile, the frantic expansion now under way in the US is not expected to fully satisfy domestic demand as late as 2016, even though the US recently accounted for less than 10 percent of global methanol consumption.

What does all this global bullishness mean for OCI Partners? It means that a major capacity expansion due to be completed late this year at the Texas plant is expected to recoup the investment within at most three years.

In fact, the partnership could end up earning quite a lot, barring an unforeseen market upheaval. In the year ended June 30, which included not quite nine months of production at the current maximum rate, OCI Partners earned enough to distribute $1.74 per unit. That’s forecast to increase to $2.15 per unit for the 12 months through Sept. 30, 2014, despite the expected 40-day shutdown associated with the de-bottlenecking late this summer.

In the fourth quarter of 2014, expansion of the methanol production capacity by 25 percent and of the ammonia capacity by 15 percent is forecast to boost the distribution to $0.868 per unit.  Boiling all of this down, based on the March 14 closing price of $24.88, the prospective yield is 8.6 percent  for the year through September of this year, and 14 percent annualizing the expected fourth-quarter payout after the de-bottlenecking is completed.

OCI Partners is scheduled to make its first quarterly report March 19 before the market open.

There are special risks, which is the case with most variable distribution MLPs. They start with full exposure to the price movements of methanol, ammonia and natural gas, none of which OCI Partners appears to have hedged. Its delivery contracts also don’t lock in any price protection. An increase in the price of natural gas of $1 per million British thermal units would cost OCIP an additional $31 million a year, about what the partnership stands to gain from a methanol price increase of $43/ton. As a result, OCIP is one of those variable-distribution MLPs that does not guarantee any distribution whatsoever, only promising to pay out what it earns minus a small set-aside for routine maintenance.

The business of making methanol in the US looks promising enough that OCI N.V. now plans to build a new plant in Beaumont with nearly twice the capacity of OCIP’s facility, which would make it the largest methanol plant in the US. Other producers are following its lead by restarting older plants mothballed during the last decade.  But gains in global demand should swamp those increases in capacity, and OCIP appears well positioned to benefit from the growing methanol market.